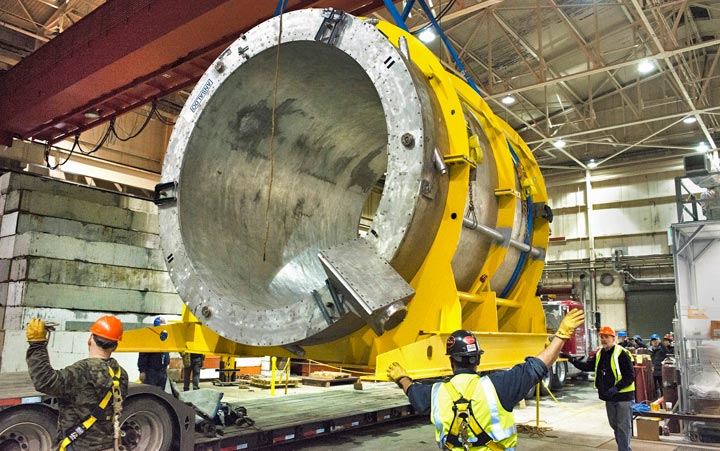 Why did the 40,000-pound superconducting magnet cross the country? The full answer to this twist on the old joke is complicated, but here’s the short version: to unlock the secrets of the atom.

Pristine, particle-tracking magnets are rare enough to count on two hands. Most of these one-of-a-kind engineering feats sit at the heart of some of the most ambitious physics experiments in history and were built specifically to discover new facets of matter.

“It was pretty unreal to finally see this amazing piece of machinery arrive safe and sound at the Lab’s main entrance. We’ve been eager to get it here and get to work on the next generation of nuclear physics experiments.”

One such singular instrument recently arrived at the U.S. Department of Energy’s (DOE) Brookhaven National Laboratory. The massive electromagnet is central to proposed upgrades at Brookhaven’s Relativistic Heavy Ion Collider (RHIC), which smashes particles together at nearly the speed of light to recreate the ultra-hot conditions of the early universe.

RHIC, a DOE Office of Science User Facility for nuclear physics and the only operating particle collider in the U.S., is currently in its 15th experimental run.

“After 14 years of discovery, RHIC remains the world’s most versatile collider and our best tool for exploring the atomic nucleus,” said Berndt Mueller, who leads Brookhaven’s Nuclear and Particle Physics Directorate. “We have much more to learn about the foundations of matter, and RHIC is running more productively than ever. We are grateful to our colleagues and collaborators at SLAC for the opportunity to give this remarkable magnet a second life at RHIC.”

The massive solenoid—a cylindrical electromagnet that generates a precise and uniform magnetic field—already spent nearly a decade driving discoveries at SLAC National Accelerator Laboratory in California. From 1999 to 2008, it sat inside a particle detector in SLAC’s BaBar experiment, probing the puzzling asymmetry between matter and antimatter. When BaBar finished its run, SLAC stored the 20-ton solenoid for use in future experiments.

Engineers prepare to move the 20-ton solenoid into its new home at Brookhaven Lab.

Meanwhile, across the country, Brookhaven Lab physicists are developing  upgrades to the PHENIX detector, one of RHIC’s two main experiments. Complemented by the STAR detector, the house-sized PHENIX tracks subatomic debris to explore the particles and forces that bind most of the visible matter in the universe. The proposed upgrade—the result of more than four years of research and development—is called sPHENIX. The acquisition of the BaBar magnet significantly decreases the cost of sPHENIX, should the proposed upgrade be approved.

“PHENIX needs a powerful solenoid to see new particle signatures inside RHIC collisions,” said Brookhaven physicist David Morrison, co-spokesperson for the PHENIX collaboration. “This kind of precise and powerful instrument is incredibly challenging and costly to construct. Fortunately, our colleagues at SLAC kept their solenoid in beautiful condition—so we pounced when we learned it might be available.”

“It was pretty unreal to finally see this amazing piece of machinery arrive safe and sound at the Lab’s main entrance,” said John Haggerty, the Brookhaven physicist who led the acquisition of the BaBar magnet. “We’ve been eager to get it here and get to work on the next generation of nuclear physics experiments.” 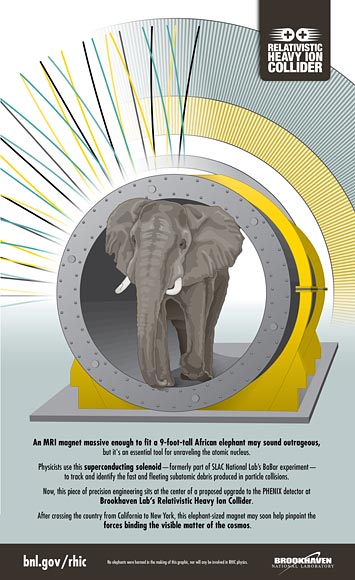 The solenoid is 3.5 meters across and 3.9 meters long—like an MRI large enough to accommodate an African elephant.

“The underlying technology is similar to an MRI—both use a uniform magnetic field to peer into matter and create three-dimensional maps,” Morrison said. “But while MRIs map our bodies, this massive electromagnet tracks shattered atoms.”

The solenoid consists of superconducting cables encased in an aluminum shell. When those cables are cooled down to 4 Kelvin—the temperature of liquid helium or about -452 degrees Fahrenheit—they generate the 1.5-Tesla magnetic field needed to track particle debris.

Much like the 2013 move of Brookhaven’s 50-foot-wide Muon g-2 ring to Fermilab—another DOE national laboratory—the BaBar solenoid required special care and consideration on its journey. Michael Anerella and Paul Kovach of Brookhaven’s Superconducting Magnet Division worked together to plan the one-of-a-kind move. The internal mechanics are very sensitive—every component must be perfectly aligned to maintain the precision needed in nuclear physics.

“Our initial checkout of the magnet, performed at room temperature, has been completed,” said Peter Wanderer, head of the Superconducting Magnet Division. “The magnet passed all these tests. The next step, to test the magnet at superconducting temperatures, will be carried out in late summer.”

The subatomic collisions inside RHIC’s 2.4-mile particle racetrack reach temperatures 250,000 times hotter than the center of the sun, melting protons and freeing the quarks and gluons otherwise bound inside the nucleus. The resulting quark-gluon plasma, known as QGP, only exists for a tiny fraction of a second, but it filled the universe microseconds after the Big Bang and reveals otherwise imperceptible aspects of the strong nuclear force.

RHIC physicists saw the first hints that they were creating QGP at RHIC in 2001 and were the first to reveal that it behaves like a perfect liquid with virtually zero resistance in 2005.

“We still don’t know why these subatomic particles flow as friction-flee liquid or the characteristics across the phase transition from normal matter to QGP,” Morrison said.

The ongoing QGP puzzle drives the motivation of the sPHENIX upgrade.

“A powerful, uniform field allows us to track charged particles and measure their momentum with high precision,” Haggerty said. “We often turn to superconducting solenoid magnets to achieve this because they can produce a strong magnetic field without putting a lot of material in the path of the particles, which might scatter them and lead to measurement errors.”

The proposed sPHENIX will specialize in part on tracking jets—the fast-flying particles formed when the liberated quarks and gluons cool and bond together. The BaBar magnet will specifically target upsilons, the bound state of a very heavy bottom quark and its antimatter twin.

“We know the exact temperatures where three kinds of upsilons melt and break down during RHIC collisions,” Morrison said. “Tracking these upsilons—which this magnet can do—helps us map the transition from the trillion-degree primordial QGP to normal matter.”

Brookhaven proposes to have sPHENIX in operation tracking particles by 2021.

Brookhaven National Laboratory is supported by the DOE’s Office of Science.

The Office of Science is the single largest supporter of basic research in the physical sciences in the United States, and is working to address some of the most pressing challenges of our time. For more information, please visit science.energy.gov.