A Tale of Two Colliders, One Thesis, Two Awards—and a Physics Mystery 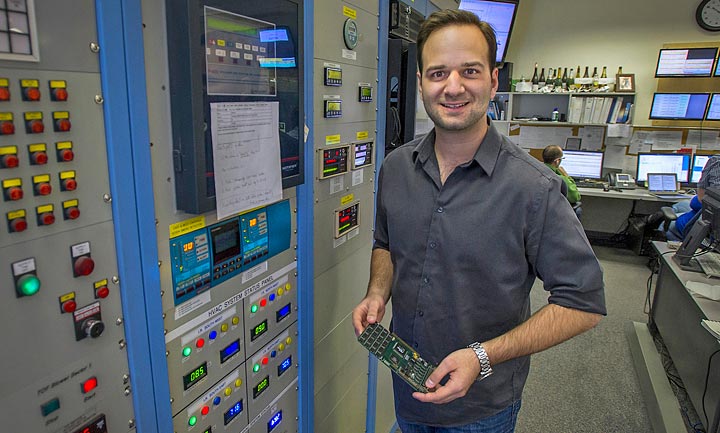 When Dennis Perepelitsa began his graduate studies at Columbia University, he met up with a powerful duo of nuclear physicists—William Zajc, a former spokesperson and still active collaborator in the PHENIX experiment at the Relativistic Heavy Ion Collider (RHIC), and Brian Cole, a leader in research at the ATLAS experiment at the Large Hadron Collider (LHC). These two colliders, located at the U.S. Department of Energy’s Brookhaven National Laboratory and the European Center for Nuclear Research (CERN), respectively, serve up collisions between particles ranging from protons to the nuclei of heavy atoms so physicists can probe their inner structure and the properties of their building blocks.

"I’ve been very lucky to work on these two world-class experiments with leaders in the field.”

Seven years later, Perepelitsa—now exploring the mysteries of nuclear physics at both PHENIX and ATLAS as a Goldhaber Distinguished Fellow at Brookhaven—has the distinction of being the first person to earn outstanding Ph.D. thesis awards* from both research communities. His Ph.D. work, based on complementary data collected at both facilities with Cole as his advisor, showcased intriguing findings that have upturned physicists’ understanding of something they thought they knew well. That ongoing mystery is guiding a part of the research programs at both machines now.

“Perepelitsa’s analysis and the continuing role he plays in both the PHENIX and ATLAS experiments is a classic example of the complementary nature of the research taking place at these two facilities,” said Brookhaven Lab physicist Dave Morrison, a current co-spokesperson of PHENIX and Perepelitsa’s supervisor. “It also highlights the far-reaching opportunities the international nuclear physics research community offers for young physicists interested in this field.”

“I’ve been very lucky to work on these two world-class experiments with leaders in the field as my advisors,” Perepelitsa said. “When I started out working on PHENIX/RHIC, we observed some very strange features in the data, and went to the LHC to look for answers to the puzzling results. Now we’re taking what we learned at the LHC and reinvesting that knowledge back into this year’s RHIC run.”

The mystery arose when Perepelitsa began analyzing data collected during RHIC’s 2008 run colliding deuterons—a simple nucleus made of one proton and one neutron—with much larger gold nuclei (with 197 protons and neutrons). “The original goal was to use the smaller deuterons to probe the structure of the larger nuclei by studying jets of particles created when quarks and gluons (the building blocks of the protons and neutrons) scatter off one another, and measure how the rate at which those jets are produced changes depending on where in the large nucleus the small deuteron hits,” Perepelitsa said. “Our thinking was that since the small particle, the deuteron, was well understood, we’d use it to learn something about the unknown larger nucleus.”

“And then everything broke down,” he said.

“Even before RHIC, we had a sophisticated set of models that could pick out where in the nucleus the deuteron ultimately struck, which allowed us to see if there were differences in how jets were produced when deuterons went through the thick, central part of the nuclei compared to deuterons colliding with the edges of the nuclei.”

But instead of results that fit well with these models, the scientists observed something “really weird” that challenged their understanding of how collisions of the smaller deuterons and large nuclei fit together conceptually with collisions of their underlying building blocks—particularly when those collisions produced very energetic jets.

These measurements were pushing the limits of what the PHENIX detector had originally been designed to “see,” Perepelitsa said, so it was hard to tell a conclusive story based on the PHENIX data alone. Fortunately, with his nuclear physics connections, he knew that the LHC was about to begin a run colliding small, supposedly well-understood protons with more complex heavy lead nuclei, producing data that should offer further insight.

“ATLAS was built later than PHENIX, so it is able measure different types of things, including jets streaming out of the collisions in the ‘forward’ direction—close to and along the path of the proton beamline,” Perepelitsa said. He invested the time in developing the necessary infrastructure and was present at CERN for taking the data “to make sure we could do the same analysis but with all the bells and whistles.”

The results revealed the same breakdown of the geometric models in the rare cases where collisions produced very high-energy jets.

“This time, the advantages of the detector meant we could study the data in more detailed ways, for example, depending on the energy and position of the jets and where the proton struck the nucleus. We had enough knobs to turn that we could try to see if there was a simple way to explain what we were seeing.”

The explanation turned out to be another surprise: The failure of the geometric models appeared to come from some unexpected effect in the proton or the deuteron.

“The patterns in the data indicated that the smaller, supposedly understood component of these collisions was the controlling factor that led to a dramatic breakdown of the models we had for understanding them,” Perepelitsa said.

One possible explanation is that protons producing the very energetic forward jets look different from “ordinary” protons. That’s just a suggestion, Perepelitsa emphasizes, but it could have unexpected relevance for physicists exploring the intrinsic properties of protons.

“We didn’t start this measurement as a way to look at basic structural properties of the proton. We thought we were using the proton as a control to understand the nucleus. But what we found out is that this big nucleus can be used as a sort of filter through which we can “see” the size of the proton, and measure how that changes when these rare jets are produced. That was pretty mind blowing.”

Physicists are still evaluating possible explanations and thinking through the implications for other scientific questions. “We are racing to keep up with what the data is telling us,” Perepelitsa said—and refining the next round of experiments.

In about a month, RHIC will produce its first-ever collisions of polarized protons with gold and then aluminum nuclei. To analyze these collisions, PHENIX now has a brand new MPC-EX detector component that Perepelitsa says, “is very well suited for measuring particles headed in the forward direction. That’s a major improvement to the detector capability. In the 2008 deuteron-gold run we had limited instrumentation there and so focused on measuring the particles that make up jets coming out at right angles to the collision, but the ATLAS data indicated that, as you select jets that are more and more forward, the effect—the breakdown of the geometrical models—gets larger and larger. The new forward MPC-EX detector will significantly expand PHENIX’s ability to look for these patterns.”

Also, the energy difference between the two machines is important to understanding the physics. Based on reasoning that even Perepelitsa describes as “complicated,” the lower energy at RHIC compared to the LHC could make the breakdown of the models even stronger. Data collected this year will reveal whether this is indeed the case—particularly using protons instead of deuterons, which should amplify the effects—and perhaps help to elucidate what it all means.

With a strong international nuclear physics research program, this back-and-forth incorporation of new knowledge into the next round of experiments will continue.

“Dennis is contributing to efforts on both fronts, playing a key role in developing the physics case for the next generation of RHIC detectors while he simultaneously analyzes the ATLAS proton-lead data and helps with preparations for the upcoming LHC heavy ion run at the end of 2015,” said Brookhaven physicist Peter Steinberg, a PHENIX group member who works primarily for the ATLAS heavy ion program.

As Perepelitsa’s experience illustrates, the complementary collaboration plays out in ways that influence other research questions in nuclear physics, and even intersects with the high-energy proton-proton experimental program at the LHC—the one that resulted in the discovery of the Higgs particle, which takes up the bulk of the operating time there.

“Whether scientists are thinking about the next improvements to detectors at RHIC, or how to tease out a signal from a thousand trillion proton-proton collisions at the LHC, there have been surprising connections in the challenges that the nuclear and high-energy physics communities face, and opportunities for us to share our experience and work together to solve these problems,” Perepelitsa said.