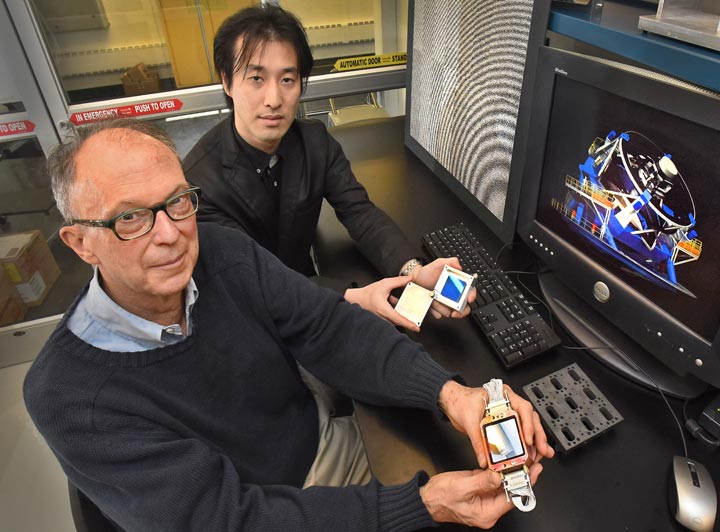 When you’re building a massive telescope designed to detect subtle shapes in the light emitted by distant galaxies, you’d like to know that the shapes you are seeing are accurate and not the result of defects in your telescope’s sensors. Fortunately sensors for the camera of the Large Synoptic Survey Telescope (LSST), expected to see “first light” from atop a mountain in Chile in 2020, just received very promising “vision” test results from physicists at the U.S. Department of Energy’s Brookhaven National Laboratory.

That’s exciting, said Brookhaven physicist Morgan May, who led the tests, because the galaxy shapes the LSST seeks to see will offer insight into the most mysterious components of our universe: invisible dark matter, which makes up a quarter of the cosmos, and the dark energy scientists suspect has driven the accelerating expansion of the universe and affected the clumpiness of its structure as we see it today.

“Based on these tests, we now know that the primary measurements of the LSST will not be affected by the tree ring defects in the sensors.”

“We’ll be looking at 10 billion galaxies to create an unparalleled wide-field astronomical survey of our universe—wider and deeper than all previous telescopes combined. So we’ll have tremendous statistical power to explore the distribution of dark matter and the nature of dark energy, two of the greatest puzzles in physics. We don’t want to be limited by systematic errors in our detectors,” he said.

Working with May, Yuki Okura, a postdoctoral fellow from Japan’s RIKEN laboratory stationed at the RIKEN-Brookhaven Research Center, performed precision studies of micron-sized defects and pixel-by-pixel variations in the silicon sensors, and then modeled their potential impact on the telescope’s ability to detect the effects of dark matter. Their results will be described in a series of publications, including one soon to appear in the Journal of Instrumentation, with former Brookhaven postdoc Andrés Plazas (now at the Jet Propulsion Laboratory) and Toru Tamagawa, head of RIKEN Astrophysics in Japan, as co-authors.

“What we found is that, although there are still subtle defects and minor variations in the sensors, they are far, far better than those on previous sky survey telescopes, and better even than early prototypes that were built for the LSST,” said May. “Based on these tests, we now know that the primary measurements of the LSST will not be affected by these structural defects.”

The LSST, originally known as the Dark Matter Telescope, will detect the distribution of dark matter throughout the cosmos. The telescope won’t see dark matter directly, but will detect its gravitational interaction with visible forms of matter, namely galaxies.

“The gravity of dark matter can bend light,” explained May. “So concentrations of dark matter in the universe act as ‘gravitational lenses’ that can change the brightness and shape of background objects, altering their appearance in a way that creates arcs around central mass distributions.”

The LSST will look at billions of background galaxies and use gravitational lensing to map where the dark matter concentrations are and how much dark matter there is. By looking at galaxies at varying distances from Earth, the LSST collaboration will be able to explore how the distribution of dark matter (and the sprinkling of visible matter) has changed over time.

“The light is coming to us from very far away, say a billion light years. That means we are seeing those objects as they were a billion years ago; we are looking at the distant past. When we look at the distribution of dark matter and how it has changed over billions of years, we get insight into the force that shaped the expansion and uneven distribution of matter in the universe today,” said May.

That “force,” given the name dark energy, makes up 70 percent of the cosmos. By measuring both the growth of structure and the expansion rate of the universe over time, the LSST will help scientists put the idea of dark energy to the test, and uncover its mysterious properties. 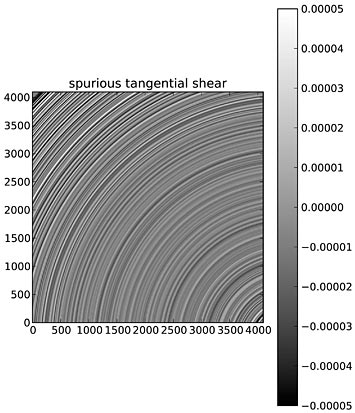 "Spurious shear" is the calculated distortion that would be caused by "tree ring" defects in an LSST sensor. Images of galaxies falling on the bright arcs would be elongated in the direction tangential to the arcs; those falling on the dark arcs would be elongated perpendicular to the arcs (in the radial direction). The grey scale at right gives the fractional elongation, which is much smaller than in previous sensors, and much smaller than the elongation caused by dark matter's gravitational lensing—the effect the LSST scientists seek to measure. The sensor contains 4000 x 4000 pixels.

Detecting the light-bending effects of dark matter requires extreme precision and a high degree of uniformity in the 200 individual silicon sensors that make up the “film” of the LSST’s 3.2-gigapixel digital camera. But growing solid-state silicon sensors from a molten mass is an imperfect process. Even with the best quality control, variation creeps in.

“The crystals of silicon grow cylindrically from the center outward,” explained May. “If there are tiny variations of impurities in the silicon or the temperature, you can get radial variations in the properties of the silicon that look like concentric tree rings. Those ‘tree rings’ make electric fields that distort the image. The concern is whether this distortion of the image will be confused with the distortion caused by the effects of dark matter.”

To find out, Okura and May used high-resolution images of the sensor surfaces produced with a uniform light source in Brookhaven Lab’s Instrumentation Division, and image correction software to reveal the barely perceptible presence of tree rings. Then they calculated the electric fields those tree rings would produce and the effect those fields would have on their astronomical images.

To see whether those effects would distort the LSST’s key measurements, they turned to a two-way process using cosmological simulations.

“First we program in certain values for the properties of dark energy and run the simulation to see how those properties drive the structure and rate of expansion of the universe,” said Okura. “Then we model how the resulting distribution of dark matter would bend the light picked up in the LSST detectors. Finally, we add the distortion that would be caused by the defects we measured in the sensors, and run the simulation backward to calculate the dark energy properties. If we get essentially the same values we started with, then we know that the distortion caused by the crystal defects is small enough that we don’t have to worry about it.”

Repeating this process with many different starting values and always coming back to essentially the same starting values, even with the subtle distortion of the detectors added in, has given the team confidence that the tree rings won’t cloud their LSST results.

“The LSST is going to be able to distinguish very fine differences in dark energy properties,” May said.

Working with Columbia University graduate student Andrea Petri, May and Okura conducted another LSST sensor test, this one looking for size variation pixel-by-pixel.

“The LSST camera is a giant digital camera with over 3 billion pixels. If the pixels are not all the same size, that will also produce something that looks like the lensing effect at a very low level,” May explained.

So Okura and May undertook a painstaking study to measure pixel size variation. They measured how much light each pixel picks up when light shines on the detector. “Bigger pixels get more light, and smaller ones pick up less,” Okura said, “so you can use the light absorbed as a stand in for pixel size.” The variation they measured is extremely small, but is it small enough to be negligible to the LSST’s measurements?

Again the team turned to the cosmological simulations. They used calculations to convert the pixel size variation into a virtual lensing effect. Then they added that effect to the gravitational lensing measurements LSST would make when observing simulated universes created from different dark energy starting properties. Again, the calculations worked equally well in reverse, even with the virtual lensing effect added in. These results will soon be submitted for publication in a journal devoted to astrophysics research.

“We can conclude that the pixel size variation in the LSST sensors we have studied will not confuse our measurement of dark energy properties,” said May.

With LSST taking pictures of the universe using “film” of unparalleled quality—and capturing images over the widest and deepest expanse of space with enough frequency to create a 3-D map and even a 3-D movie—researchers and the public can look forward to amazing discoveries and surprises.

Brookhaven’s work on the LSST is funded by the DOE Office of Science.