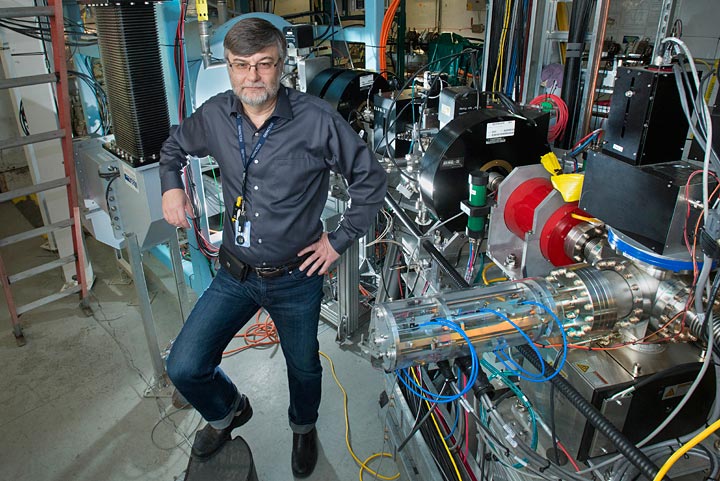 Sergey Belomestnykh, a physicist at the U.S. Department of Energy's Brookhaven National Laboratory, is being recognized by the Institute of Electrical and Electronics Engineers Nuclear Plasma Sciences Society (IEEE NPSS) for his outstanding contributions to the development of particle accelerator science and technology.

"It's hard to describe the excitement of building these SRF components and then seeing them work in an accelerator, being used to study particles, or even discover new ones."

"Superconducting radio frequency cavities are the components in particle accelerators that push particles to close to the speed of light. I'm honored to receive this IEEE NPSS award for designing these complex devices," Belomestnykh said.

Belomestnykh leads the Lab's SRF group, which designs, constructs, and tests SRF cavities at facilities like the Relativistic Heavy Ion Collider (RHIC)—a DOE Office of Science User Facility at Brookhaven Lab—where physicists smash ions to study their subatomic quarks and gluons, the "strong force" that ordinarily confines them within protons and neutrons, and the proton's intrinsic spin structure. The group is also developing SRF cavity prototypes for a possible future electron ion collider facility that could be used to probe even deeper into the mysteries of the strong force and secrets of the proton's spin.

"Electromagnetic waves transmitting from a radio antenna go in all directions into the atmosphere," Belomestnykh explained. "We design these superconducting radio frequency cavities in specific sizes and shapes that confine the waves' power and energy to direct them toward the particles we want to accelerate."

Currently, Belomestnykh and the SRF group are working on SRF technologies for an energy recovery linear accelerator (linac) that would accelerate high-intensity particle beams to very high energy using modest amounts of radiofrequency power by decelerating and recovering energy from "used" electrons. The group is also working on SRF cavities for a coherent electron cooling system being developed to increase particle collision rates, or "luminosity." These advanced systems will play important roles at any future electron-ion collider.

In addition, the SRF team is building a prototype "crab cavity" for an upgrade planned for the early 2020s at the Large Hadron Collider at CERN in Europe. This special SRF cavity is designed to confine electromagnetic waves that slightly rotate ion bunches racing at each other to produce more particle collisions and, therefore, higher luminosity.

"It's hard to describe the excitement of building these SRF components and then seeing them work in an accelerator, being used to study particles, or even discover new ones," Belomestnykh said.

Belomestnykh, a resident of Miller Place, New York, earned a master's degree in engineering electrophysics from Novosibirsk State Technical University in Russia in 1981, and a Ph.D. in engineering sciences from Budker Institute of Nuclear Physics, also in Novosibirsk, in 1998. He served in a number of roles at Cornell University—from visiting scientist to senior research associate—from 1994 to 2011. Belomestnykh arrived at Brookhaven Lab as a physicist and head of the SRF Group in the Collider-Accelerator Department in 2010. He began teaching physics courses at Stony Brook University as adjunct professor one year later, and was named Brookhaven Professor in 2015. Belomestnykh was named an IEEE senior member in 2014.