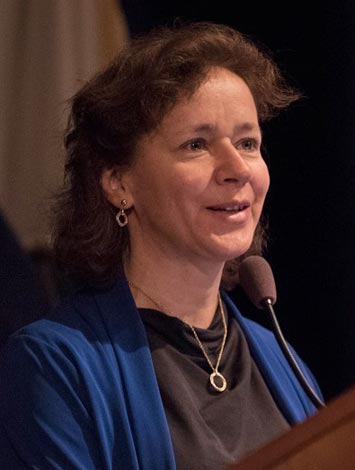 Tanja Pietrass, the Director of the Chemical Sciences, Geosciences, and Biosciences Division at the Department of Energy's Office of Basic Energy Sciences, addressed the gathered user community and spoke about the direction of research across the division.

In the middle of May, the U.S. Department of Energy’s (DOE) Brookhaven National Laboratory hosted hundreds of scientists for the annual NSLS-II & CFN Users’ Meeting. The long-awaited opening of NSLS-II was reflected in the theme: “It’s Showtime!”

They joined Brookhaven Lab Director Doon Gibbs for an update on Brookhaven’s scientific program, as well as Tanja Pietrass, the Director of the Chemical Sciences, Geosciences, and Biosciences Division at the Department of Energy’s Office of Basic Energy Sciences, who spoke about the direction of research across the division.

“Our vision is to be the leading Department of Energy multiprogram laboratory with recognized impact on national science needs,” Gibbs said. He spoke of the Lab’s focus on its world-class programs, including leadership in photon sciences – which encompasses NSLS-II – and energy sciences, along with an increased focus on data-driven computational science and on applied science. Serving scientists at NSLS-II and CFN, which are both DOE Office of Science User Facilities, is an essential component of Brookhaven’s recipe for success in these endeavors.

In her update on programs in DOE’s Office of Basic Energy Sciences, Pietrass emphasized the new Office of Technology Transitions, which was formed to coordinate and streamline all activities that go into taking research results directly to the marketplace. She highlighted exciting innovations and discoveries at the 32 Energy Frontier Research Centers – which she called a “priority for the Secretary of Energy” – all but one of which have direct involvement with the National Laboratories.

“The user facilities are really a tremendous resource and the fact that they are available to all researchers in the community is a tremendous opportunity,” Pietrass said. “The fact that we have facilities like [NSLS-II and CFN] really gives us an advantage over other nations in terms of being able to produce great research.”

Following on, Emilio Mendez, Director of the Center for Functional Nanomaterials, and John Hill, Director of NSLS-II, gave updates on the status of these facilities.

Mendez reviewed the growth of the CFN user base, which has increased from 100 scientists in 2008 to the current 473 users per year.

“Not only do we have a large number of users, but they are productive and impactful,” he said. Publications based on work at CFN have increased substantially, with a significant number based on collaborative work between visiting scientists and staff at CFN. “This intellectual collaboration distinguishes CFN.”

The facility is also changing. Two major additions of equipment were installed and started operations in the last year: A pulsed laser deposition system, which uses a high-powered laser to vaporize materials and deposit them in layers on a substrate, and a new low-energy electron microscope.

The former can perform experiments up to 950 degrees and will be a “very useful, powerful and versatile tool,” Mendez said. The latter enables real-time imaging of materials in situ, with spatial resolution down to two nanometers. This microscope will eventually be installed at one of the beamlines funded by the NEXT project at NSLS-II. In the meantime, CFN is operating the microscope with a UV lamp to do some limited photoemission spectroscopy.

Coming soon at CFN will be a dedicated transmission electron microscope, which will operate under high temperatures and high pressures—capabilities well-suited for studying crystal growth and catalysts as they operate. It will be available for users within the next year, Mendez said.

In the next few years, CFN will partner with photon sciences to complete four end-stations of beamlines at NSLS-II. These will be commissioned and operational by 2017 and will have three fully dedicated staff members.

“A key element of our strategy has been the interaction and the synergy that we have with NSLS-II,” he said.

Hill began with an acknowledgement of the decades of discovery at the predecessor to NSLS-II, the National Synchrotron Light Source.

“I have very fond memories of not just the experiments but also the people at NSLS. That facility really distinguished itself by its great community. We all take a lot of pride in what NSLS accomplished,” he said. Those accomplishments include innovations that drove synchrotron science around the globe, including the Chasman-Green lattice, monochrometer development, detector technology, infrared research, and innovations in techniques across many energy ranges that have spawned fields of study around the world.

First light occurred at NSLS-II just three weeks after NSLS closed its doors. “Construction is over,” Hill said. “Now we are into commissioning and operations.
The accelerator has been coming up beautifully,” he noted, having already produced more than 1600 hours of operations with commissioning ahead of schedule. “It’s performing very well, indeed.”

All insertion devices and beamlines funded under the NSLS-II project have been commissioned, and storage of 200 milliamps has been achieved in the ring. Stability and emittance have been measured as meeting or exceeding goals.

“That’s a really promising sign for the potential of this machine,” said Hill. “What we’re going to be famous for is the brightness of the source.”

The goal for next year is to store a beam at 400 milliamps, and 500 milliamps the year after that. By 2017, installation activity in ring will go down, so available hours for users will go up to about 3000 hours per year.  Hill estimated that the facility will host 3,000 users a year by 2019.

“We have concrete plans to fill out about half of the experimental floor with beamlines. To fill out the rest, we are going to hold the next Strategic Planning Workshop on September 24-25 to help inform the decision-making process.  I encourage you all to attend that meeting,” Hill said. That workshop will review capability gaps in the current beamline portfolio, take a look at how NSLS-II fits into the international landscape, and determine what capabilities should be pursued when selecting the final 30 beamlines for NSLS-II.

Ben Lillie, co-founder and director of The Story Collider, a science storytelling event and podcast held in locations all over the world, gave the keynote address, titled “Crafting stories about science.” He shared his experiences with and suggestions for communicating science in an accessible manner.

“My first job was to design trigger systems that filter out data at RHIC,” he said, referring to the time he spent at Brookhaven’s own Relativistic Heavy Ion Collider in the year 2000. “But I decided to do something else with my life. Though, it’s not all that different. That’s the same thing you do with stories. You have to decide exactly what to keep in without distorting the science.”

Lillie’s talk emphasized the nature of good storytelling, which was later showcased in a Story Collider event held at the Users’ Meeting banquet in the Suffolk Theater. There, five scientists from NSLS-II and CFN stood on stage to tell their own stories, small and large, about a moment of illumination during their careers.

One of the storytellers was Sean McSweeney, a structural biologist at NSLS-II. He spoke about a time when he was using a synchrotron to solve the structure of a protein when he fully appreciated biology for the first time.

“A moment of Damascan wonder came over me. I could see the complexity of the enzyme itself. I could trace how this thing was built. What was revealed was something no one else has seen, with exquisite detail. And this sense of wonder of seeing new structures of seeing biology in action, has stayed with me since. It’s such a useful use of light.”

Those useful uses of light, as McSweeney put it, will expand in the coming years at NSLS-II and CFN, and the scientists who attended the meeting left informed and inspired about the future possibilities for research with synchrotron light and nano-tools at Brookhaven National Lab.