“This is an important milestone for the NSLS-II and also for the entire x-ray microscopy community,” said HXN lead beamline scientist Yong Chu. “This accomplishment is a result of several years of hard work by the HXN team and our close collaborators.” 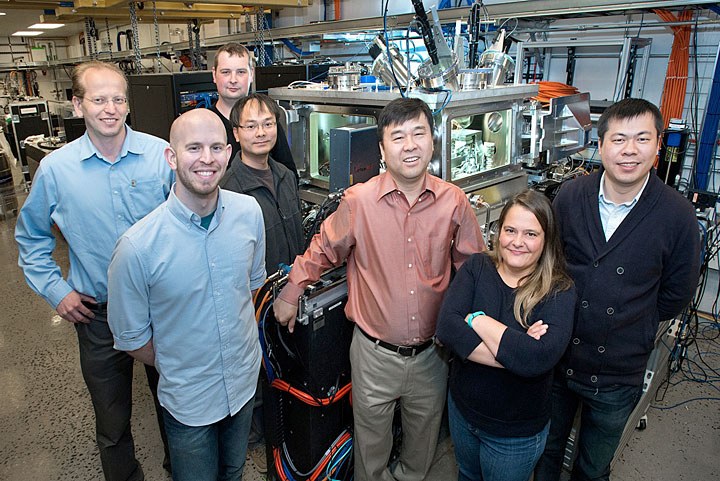 The Hard X-Ray Nanoprobe takes full advantage of the ultra-bright x-rays produced by NSLS-II, a U.S. Department of Energy Office of Science User Facility. The heart of the beamline is the HXN x-ray microscope, developed at NSLS-II. The microscope produces ultra-high resolution x-ray images by manipulating a sample and a pair of novel nanofocusing optics called multilayer Laue lenses, which are also fabricated at NSLS-II. Precise manipulation of the sample and lenses is achieved using state-of-the-art piezo stages and laser interferometers.

The nanoprobe's imaging capabilities were recently demonstrated in a benchmarking experiment that completes the beamline’s technical commissioning. The team took measurements at an x-ray energy of 12 keV and a storage-ring current of 50 mA. They imaged a specially fabricated test sample of platinum (Pt) that was patterned with a series of circles, each with a minimum feature size of 20 nm. The image clearly shows the distinct, separate circular structures, which the HXN team dubbed “golden donuts.”

“We are extremely delighted to see this highly complex instrument perform as expected within the first month of operation,” said Evgeny Nazaretski, who spear-headed the development of the microscope.

Added Hanfei Yan, another scientist on the team who leads both the theoretical and experimental efforts of the development, “Now, we can image nanoscale morphology and elemental distribution with unprecedented detail using hard x-rays.”

Notably, the golden donuts image was produced using a fly-scan, an advanced scanning method in which the sample is continuously scanned to achieve high imaging throughput, in a similar way that cathode-ray tube computer monitors produce an image. 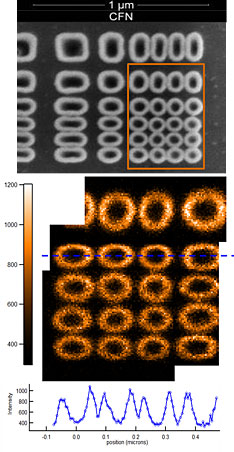 “We paid substantial attention to making sure that a number of devices synchronize on a common signal, analogous to a way an orchestra plays music according to the conductor beat but much faster,” said beamline controls engineer Ken Lauer.

The team's goal is to produce “decent-sized images, say 500 nm by 500 nm, in only a few minutes,” said Brookhaven physicist Xiaojing Huang, who is also a member of the HXN team. “With the full storage-ring current of 500 mA and additional instrument optimization, we should be able to achieve such throughput.”

Another team member, Sebastian Kalbfleisch, added, “Of crucial technical importance, not easily appreciated by many people, is that we must maintain x-ray beam stability better than 100 nrad, which is the equivalent of aiming the beam through the eyes of two sewing needles that are separated by 10 miles.”

The HXN team still has plenty of work ahead of them over the next two years, such as commissioning diffraction and 3D imaging capabilities, and developing effective methods for “in operando” investigation of batteries and future-generation nano-electronics.

“What we have achieved is only the beginning of a long journey,” said Chu. “We plan to commission additional capabilities in phases, so that each commissioned capability can be effectively used for general user experiments.”

The first early science user experiment was performed in last July. In the October-November beam cycle, approximately 60% of the beam time is allocated for general user experiments.