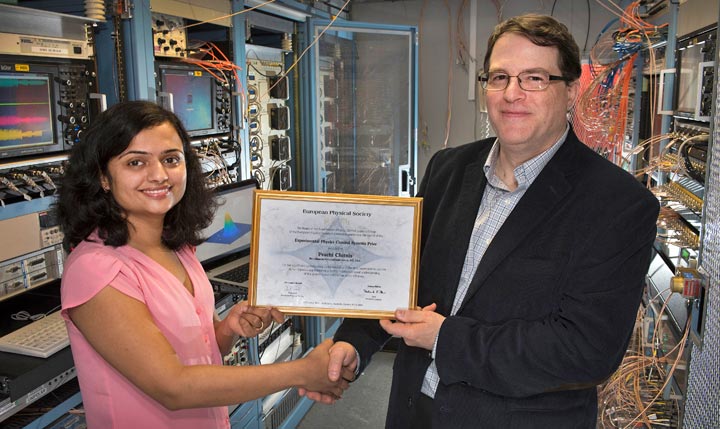 Prachi Chitnis, a Stony Brook University (SBU) student mentored by Kevin Brown, a physicist at the U.S. Department of Energy’s (DOE) Brookhaven National Laboratory’s Collider-Accelerator Department, has been awarded the 2015 Experimental Physics Control Systems Prize by the European Physical Society (EPS) for her “significant contributions to the reliability of the RHIC beam permit system.” Chitnis traveled to Australia in October to accept the award.

Chitnis, a Ph.D. candidate in electrical engineering, has focused her thesis work on machine protection systems: in particular, analyzing reliability and vulnerabilities of the beam permit and quench detector systems at Brookhaven’s Relativistic Heavy Ion Collier (RHIC) — systems that are responsible for monitoring the operation of the beam and shutting it down if it detects a fault.  Chitnis is also working on recommendations for development and design of machine protection systems for future colliders.

“Being recognized by EPS for my research was a welcomed surprise,” said Chitnis.  “I am grateful to Kevin for his guidance these past four years as I pursued my dream to obtain my Ph.D. and embark on my science career. ”

Machine protection systems for superconducting particle accelerators such as RHIC, a  U.S. DOE user facility, or the Large Hadron Collider at CERN in Switzerland, are already quite sophisticated. These protection systems are critical for ensuring all accelerator components are protected against damage from high-power beams and synchrotron radiation, as well as ensuring the collection of large amounts of scientific data through well-designed, highly reliable systems. Understandably, gaining further knowledge on how accelerators function, and the amount of damage they are potentially subjected to, plays a critical role in research.

Through the development of detailed simulations, advanced statistical models, and through the use of analytical tools to combine simulation results with existing data from RHIC, Chitnis’ work covered two important areas: a reliability analysis of the RHIC beam permit system and the remodeling of superconducting magnets to improve the reliability of the detection system for “quenching” (when the accelerator magnets lose their superconductivity). Using beam permit modules and quench detection modules located at stations around the RHIC ring, faults or quenches can be detected at any location. When necessary, the beam permit system terminates the beam and superconducting magnet currents, avoiding damage to the machine, which can lead to significant delays of the experiment. The operation of these beam permit and quench detection systems is a delicate balance between protecting RHIC from failures, while not overprotecting the systems, which can generate false alarms thus reducing the availability of the machine.

“Prachi has worked very diligently and methodically to address questions of machine protection that are of great importance to RHIC experimental runs,” said Brown, who has mentored Chitnis since 2011. “I am happy that her hard work has been recognized by EPS and I know that she has a successful scientific career ahead of her.”

Chitnis previously worked as a scientist at Raja Ramanna Center for Advanced Technology in India, where she was involved in control system design for the synchrotron injector system. She obtained her masters in engineering physics with a focus on accelerator technology from Homi Bhabha National Institute, Mumbai, India, and her bachelor’s in electrical engineering from National Institute of Technology, Bhopal, India. She expects to receive her Ph.D. in December 2015.