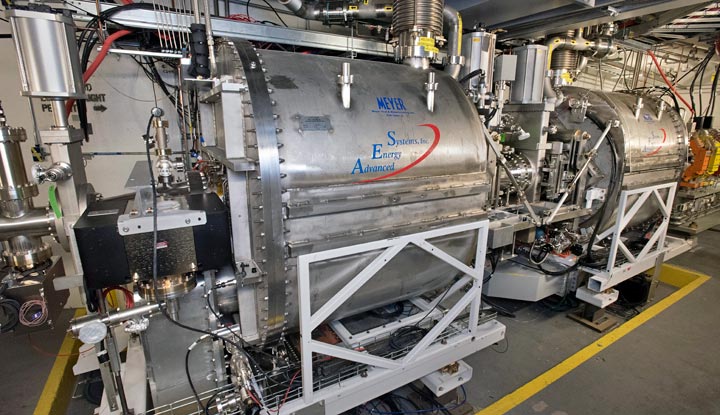 A superconducting radio-frequency cryomodule installed in the NSLS-II ring.

When you think about the coldest places on Earth, the National Synchrotron Light Source II (NSLS-II), a U.S. Department of Energy (DOE) Office of Science User Facility located at the DOE’s Brookhaven National Laboratory, probably doesn’t come to mind. But accelerating electrons around the half-mile-long ring of NSLS-II at nearly the speed of light requires some extremely cold temperatures, hundreds of degrees below the freezing point of water.

A continuous flow of electrons

As electrons circle around NSLS-II’s ring, they emit extremely bright X-rays that scientists use to image materials, such as soil samples, batteries, and biological proteins. “The images are not necessarily photographs, but spectrum, absorption lines, or diffraction patterns,” explained James Rose, head of the Radio Frequency Systems Group for NSLS-II.

By studying the fluorescence, diffraction, scattering, and absorption of X-rays, scientists can uncover a material’s atomic structure, which gives rise to its chemical, electronic, and structural properties. From examining soil samples to understand the uptake of chemical runoff, to watching in real time as batteries operate to discover where and how materials inside break down, to examining the structure of biological proteins to help design new drugs for treating disease, scientists at NSLS-II probe the inner workings of various kinds of materials.

In producing these X-rays, the electrons lose energy and slow down. For the electrons to continue generating the high-power X-ray beams used by scientists from around the world to image materials, this energy must be replenished.

At NSLS-II, electrons gain this energy by passing through two hollow metal (niobium) chambers called radio-frequency (RF) cavities that contain an electromagnetic field. The electric field transfers energy to the electrons, propagating them along the ring. “An RF cavity is a resonator like an organ pipe or guitar string,” said Rose. “Our cavities are tuned to a particular frequency such that an electron traveling around the ring passes through the cavity at the same phase each trip, and gains the same energy per pass as it loses energy to synchrotron radiation, or light. Giving energy to the electron at just the right time increases its energy, much like someone pushing a child on a swing.”

When cooled to an extremely low, or cryogenic, temperature, the niobium in the RF cavity becomes superconducting—that is, it loses nearly all resistance to an electric current. As a result, electrons can flow freely through the cavities. If niobium were conducting electricity as it would at room temperature, there would be a large resistance to the flow of electrons. When electron flow is resisted, the electrical energy that moves the electrons is converted into heat energy—a waste product. Without this resistance, electricity can be delivered to the cavity much more efficiently.

“If the cavities were not superconducting, almost seven times more energy would be required to keep the electrons flowing to produce high-intensity X-ray beams,” said Rose.

The superconductivity not only reduces energy loss in the cavities but it also provides for electron beam stability.

“Because we don’t need to worry about keeping resistive losses low, we can design the cavities with a large aperture that allows resonant frequencies above the cavity’s tuned frequency to leak out of the cavity into absorbers that damp, or reduce the amplitude of, the higher-frequency oscillations. If these higher frequencies were not damped, they would add and subtract energy from the beam out of sequence. That’s like pushing the child on the swing randomly, causing the swing to slow down or stopping the child short at the highest speed,” explained Rose.

At NSLS-II, the RF cavities are continuously immersed in liquid helium, which, with the help of liquid nitrogen, cools niobium to its superconducting state. The cavities are installed within cryomodules, which are essentially vacuum-insulated containers like thermos bottles that maintain the ultra-cold temperatures of the liquid helium to allow for near-zero electrical resistance within the RF cavity. 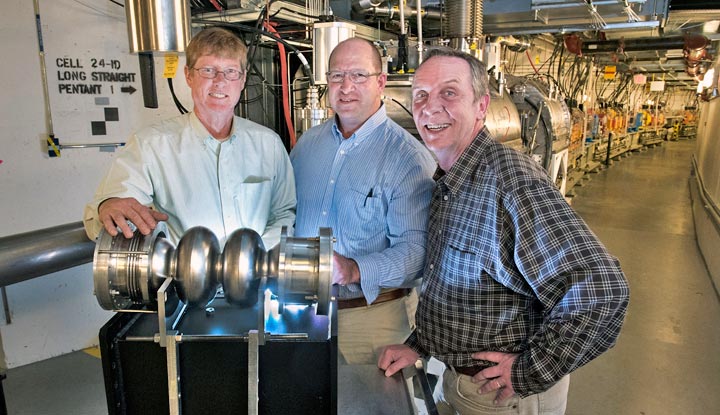 Brookhaven Lab staff members (left to right) James Rose, John Gosman, and William Gash with one of the two electron bunch–lengthening radio-frequency cavities that will be installed at the National Synchrotron Light Source II (NSLS-II). By reducing the number and intensity of collisions between electrons circling the NSLS-II electron storage ring, these cavities will help prevent electron beam loss and thus extend the lifetime of the beams used to conduct experiments.

Cooling helium gas into a liquid is a multistep process. First, the gas is squeezed in compressors. As the gas molecules are forced into a smaller volume, the pressure and temperature of the gas rise. The gas is then fed into an insulated enclosure called a cold box, where three fast-moving expansion turbines liquefy the gas by reducing its pressure, causing the gas molecules to spread apart. This rapid expansion causes the gas to cool and a portion of it to liquefy.

“The cold box is the heart of the cryogenic plant,” said William Gash, a cryogenics engineer in Brookhaven’s Utilities Group. “Its turbines rotate at many thousands of revolutions per second, as compared to a car, which operates in revolutions per minute.”

Once liquefied, the helium is stored in a large vacuum-insulated container and distributed through insulated piping and control valves directly into the cryomodules to surround the RF cavities.

The remaining cooled gas is returned to the cold box, where it flows through heat exchangers to precool the incoming high-pressure gas before being sent to the compressor to start the cycle again.

“The cryogenics plant is a closed-loop system,” explained Gash. “All of the helium is recovered. Even in the event of an emergency, we have a recovery system in place to ensure the supply is retrieved.”

In the next five years or so, additional superconducting RF cavities and valves will be installed.

“This installation will provide the RF power needed to support more beams and thus more experiments at NSLS-II,” said Rose.

Two of the cavities will be electron bunch–lengthening cavities, which “lengthen” the bunches, or groups, of electrons traveling around the ring.

In dense bunches, electrons circling the ring undergo collisions with other electrons in the bunch. “Imagine dancers that bump into one another on a crowded dance floor,” said Rose.