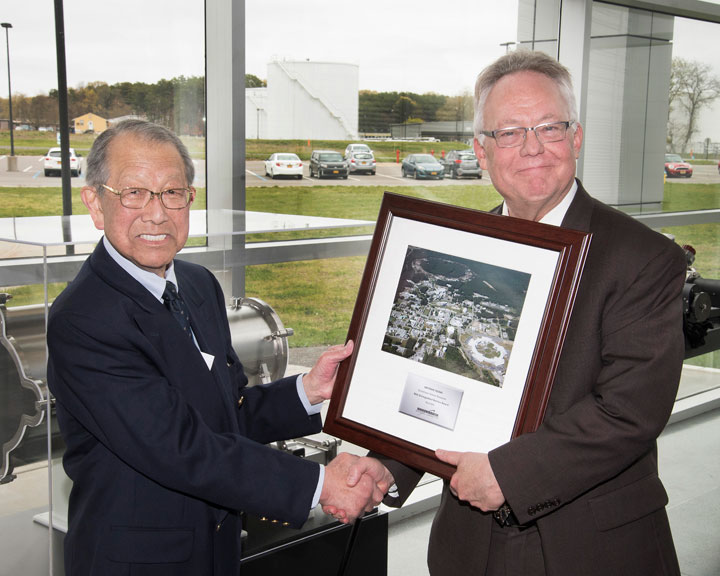 Satoshi Ozaki, a senior scientist emeritus at the U.S. Department of Energy's Brookhaven National Laboratory, has been presented with a BSA Distinguished Service Award from Brookhaven Science Associates (BSA), the company that manages Brookhaven Lab for DOE's Office of Science.

Ozaki was recognized for his lasting, impactful, and substantial contributions to the Laboratory and DOE since joining Brookhaven Lab in 1959. He was presented with the award during a special ceremony held in the lobby of the National Synchrotron Light Source II (NSLS-II) on May 2. Those in attendance included Brookhaven Lab Director and BSA President Doon Gibbs, DOE Brookhaven Site Office Manager Frank Crescenzo and Deputy Site Manager Robert Gordon, former Brookhaven Lab directors Sam Aronson and Nicholas Samios, and other members of the Lab's current leadership team. Peter Bond, who served in a number of roles at the Lab—including as interim Laboratory Director—was unable to attend the celebration and sent Ozaki his congratulations.

BSA, the limited-liability company founded by the Research Foundation for the State University of New York on behalf of Stony Brook University and Battelle to manage Brookhaven Lab for DOE, created this award in 2004 to recognize retiring staff members for records of achievement at Brookhaven Lab. Honorees are nominated by the Laboratory director and must be approved by BSA's board of directors. Ozaki is the second person to receive the BSA Distinguished Service Award—the first was Peter Paul, the Lab's former deputy director for science & technology and interim Lab director, in 2004.

The success of the Relativistic Heavy Ion Collider stands as a monument to Satoshi's leadership, and he has left an indelible mark on the National Synchrotron Light Source II.

"Satoshi Ozaki is one of the world’s foremost accelerator builders and his contributions to Brookhaven Lab have been numerous, wide-ranging, and characterized by his wisdom," said Lab Director Gibbs. "The success of the Relativistic Heavy Ion Collider stands as a monument to Satoshi's leadership, and he has left an indelible mark on the National Synchrotron Light Source II."

"With my most sincere appreciation, I thank the BSA Board for this recognition as well as every person who helped make these achievements possible for pioneering scientific research—from succession of Laboratory directors, early mentors, and colleagues to my teams' technical and support staff and, in fact, the entire Laboratory," Ozaki said.

Ozaki served as project director for the Relativistic Heavy Ion Collider (RHIC) throughout the facility's design and construction. He had a leading role in the crucial industrial magnet procurement and technology transfer program, a major technical component for the project. Under Ozaki's leadership, the RHIC project was completed on schedule.

Operations at RHIC—a DOE Office of Science User Facility—began in 2000 and continue today. RHIC is vital for scientists to test and expand their understanding of "strong-force interactions" between the quarks and gluons confined within every atom's protons and neutrons. RHIC is also the only research facility in the world capable of colliding protons that are "polarized"—aligned with their “spin” axes pointing in a specific direction. Colliding polarized protons allows scientists to explore how a proton's constituent particles contribute to its spin property, and may help solve the great "proton spin crisis." 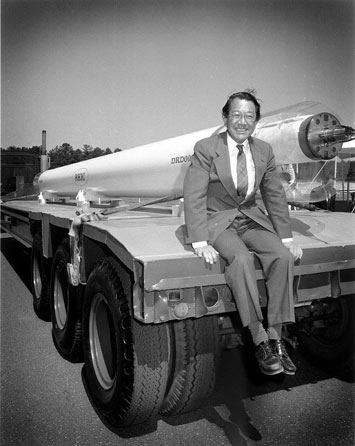 Satoshi Ozaki in 1991 with a yet-to-be-installed magnet for the Relativistic Heavy Ion Collider. Ozaki also had trees planted at the entrance to the 2.4-mile-round RHIC accelerator ring—one tree to signify each Department of Energy project review.

Ozaki was also instrumental to the success of the NSLS-II project, which he joined in 2005 as the initial head of the NSLS-II Accelerator Division. He built up the group, attracting staff and leading development for the accelerator portion of the facility's conceptual design. After helping recruit his successor, Satoshi remained with the project as a senior advisor, taking on a major task of procuring the storage ring magnets.

NSLS-II—a DOE Office of Science User Facility—dedicated in 2015, is the brightest, most advanced light source of its kind for high-impact, discovery-class science and technology. It produces extremely bright, intense beams of x-ray, ultraviolet, and infrared light, enabling a wide range of scientific studies in areas including energy applications, geological and environmental studies, and biomedicine.

Ozaki was also key to procuring Japanese support for now well-established infrastructure at the Laboratory, including the PHENIX experiment as well as the partnership between RIKEN—Japan’s Institute of Physical and Chemical Research—and Brookhaven for the RIKEN BNL Research Center (RBRC), where physicists from RIKEN, Brookhaven, and many other institutions around the world have worked together since 1997 to understand more about the building blocks of the universe and their origins.

Some of Ozaki's Many Other Achievements

Ozaki earned a master's degree in physics from Osaka University, Japan, and a Ph.D. in physics from the Massachusetts Institute of Technology. His work in experimental particle physics and large-scale detector development at Brookhaven also led to a 1981 invitation from the National Laboratory for High Energy Physics—KEK—in Japan to direct the construction of TRISTAN, the first major, high-energy particle collider in the country. He remained at KEK until returning to Brookhaven in 1989.

In addition, since 1978 Ozaki has been involved in the initiation and oversight of the Agreement on High Energy Physics between the Japanese and U.S. governments. He also organized a symposium in October 2010 in Hawaii to celebrate the 30th anniversary of this highly fruitful program.

Ozaki retired from Brookhaven Lab in 2012 and was named senior scientist emeritus. He has received a number of prestigious awards. Among them are the 2007 IEEE Nuclear and Plasma Sciences Society Accelerator Science and Technology Award, which he shared with Michael Harrison for leadership in the successful design and construction of RHIC. He also received the 2009 Robert R. Wilson Prize of the American Physical Society for his contributions to accelerator science and technology on two continents and his promotion of international collaboration. In 2012, he received a commendation from the Consul General of Japan, which was followed in 2013 with Japan’s prestigious Order of the Sacred Treasure, Gold Rays with Neck Ribbon, conferred by Emperor Akihito of Japan—both recognizing Ozaki’s outstanding contributions in physics through high-energy and nuclear physics studies, as well as his significant contributions to the promotion of Japan-U.S. cooperation in physics.