Built as part of the accelerator chain that feeds ions to RHIC, the Booster is still running strong and could play a significant role in the future of nuclear physics at Brookhaven Lab

Senior physicist Wu-Tsung "Bill" Weng standing in front of a life-size photo of the Alternating Gradient Synchrotron (AGS) with a shovel from the Booster's groundbreaking ceremony and a spoof "Driver's License" to operate the Booster, a gift from his friends at the U.S. Department of Energy.

June 26 marks 25 fruitful years since the Alternating Gradient Synchrotron (AGS) Booster at the U.S. Department of Energy’s Brookhaven National Laboratory first sent accelerated ions barreling into the transfer line towards the AGS. The Booster has played an important role in the discoveries made at the AGS, the Relativistic Heavy Ion Collider (RHIC), and the NASA Space Radiation Laboratory (NSRL). From 1995 to 2015, the Booster helped the AGS establish and hold a world record for the highest synchrotron beam intensity by raising injection energy from 200 million electron volts (MeV) to 1.5 billion electron volts (GeV).

“The Booster was built as an enabler machine—enabling all the machines downstream to do new and better physics,” explained Wu-Tsung “Bill” Weng, the senior physicist brought back to Brookhaven in 1987 to lead the Booster project after a brief sojourn at the SLAC National Accelerator Laboratory. 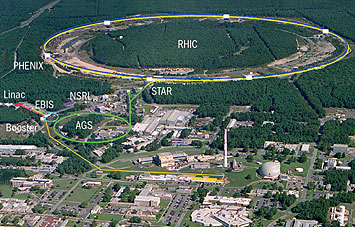 An aerial photograph of the chain of accelerators that feed ions to the Relativistic Heavy Ion Collider (RHIC), a DOE Office of Science User Facility for nuclear physics research. The Booster (light blue) also sends a range of ions to the NASA Space Radiation Laboratory (NSRL, purple) so scientists can study and potentially mitigate the risks posed by cosmic ray exposure during future long-term space flights.

Now the Booster also plays a key role in the NASA Space Radiation Laboratory (NSRL), which uses heavy ions in fixed target experiments to simulate and study the effects of space radiation.

Back in the early 1980s, the Booster was not a part of Brookhaven’s grand plan. At that time, the Laboratory was working to build a particle accelerator called ISABELLE to study high-energy, proton-proton collisions, much like the Large Hadron Collider (LHC) now operating near Geneva, Switzerland. Brookhaven’s vision was to send protons streaming from the linear particle accelerator (LINAC, built in 1971) into the AGS (built in 1960) for acceleration, and then into ISABELLE for experiments.

However, by 1982, it was clear to the high-energy physics community that the existing infrastructure at Brookhaven Lab could not provide sufficiently high proton energies to produce exciting physics at ISABELLE. The High Energy Physics Advisory Panel (HEPAP) recommended moving the community’s energy and resources into the Superconducting Super Collider (SSC) in Texas instead.

The Booster team’s hard work and dedication have been essential to the accelerator’s success.

Physicists at Brookhaven persevered, continuing to push for an advanced accelerator design at the Laboratory. In 1984, the first proposal was submitted for the machine now known as RHIC, which made use of the existing ISABELLE tunnel, for nuclear physics experiments.

Before RHIC could be operational, scientists needed to develop an injector chain that could deliver the ions for RHIC, and support the existing fixed-target programs at the AGS. The AGS did not have a sufficiently good vacuum and could not achieve adequate beam intensities for the range of heavy ion species—from deuterons to gold—that were required for the RHIC program.

So, researchers built another accelerator to work with the AGS. With a vacuum 10,000 times better than the AGS, the ultra-high-vacuum condition of the Booster provided the “missing” link in the chain of accelerators needed to bring the ions up to speed.

Weng put great care into getting the Booster ready for its physics career. To streamline the commissioning process, he limited the beam time to eight-hour shifts. Each shift was dedicated to testing one major process at a time.

“Usually when you build a machine, commissioning time is very intense since the power supply could break, the vacuum could leak, and all hell can break loose. It’s usually very tough and the beam runs 24/7. I forced my team to prove to me that everything was ready before I gave them a shift,” he said. 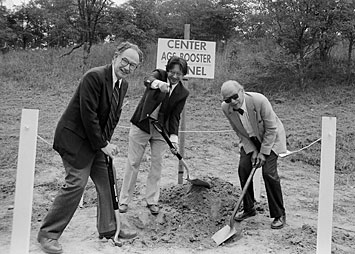 Participating in the groundbreaking ceremony of the Booster, from left to right: Jack Sandweiss of Yale University, then Brookhaven Lab Director Nick Samios, and Herman Feshbach of the Massachusetts Institute of Technology

With this structured approach, the Booster was ready in three months after just 40 hours of beam time, in contrast to other accelerators where commissioning has taken as long as several years.

The accelerator physicists at Brookhaven also spruced up the AGS—already home to three Nobel-Prize-winning discoveries—to make the AGS work better as part of the new accelerator chain.

After commissioning the Booster and upgrading the AGS, scientists ran a series of lower-energy, fixed target heavy ion experiments in the AGS to prove the viability of the research planned for RHIC, the main project. The AGS heavy ion experiments explored states of compressed nuclear matter containing many protons and neutrons. For over a decade, physicists used gold ions accelerated by the Booster to explore large nuclear systems and heavy ion physics. Many of the junior scientists trained here went on to make significant contributions to the RHIC scientific program. 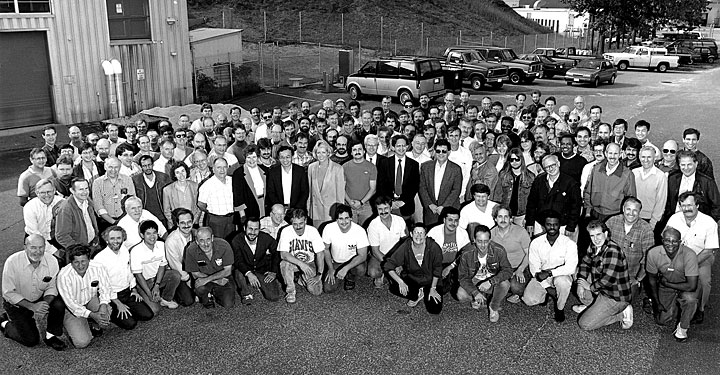 The Booster staff in 1998 outside of the Booster entrance gate

After the lower-energy experiments proved successful, the Booster accelerated a wide variety of particle species: from the gold ions used to recreate the quark-gluon plasma of the early universe at RHIC, to the polarized protons that have helped unlock the secrets of proton spin, to the high intensity protons used to probe other physics mysteries in fixed target experiments at the AGS. Those fixed-target experiments included two groundbreaking searches that hinted at new physics beyond the Standard Model of particle physics—the rare K-decay and Muon g-2 experiments.

The Booster also sends beams of heavy ions directly to the NASA Space Radiation Laboratory. At NSRL, the heavy ions serve as stand-ins for the high-energy cosmic rays in outer space. Scientists use the beams to study the radiobiological effect of ions on cells, tissue cultures, and electronics. The experiments help researchers understand the risks of space radiation to future astronauts and their equipment.

The Booster has only had two major stoppages in its 25 years—to replace worn excitation coils. After these were swapped with spares, work resumed after a few days.

Throughout it all, the Booster team’s hard work and dedication have been essential to the accelerator’s success. Weng acknowledged some of the key members, beginning with Eric Forsyth, who laid the foundations of the Booster project, and continuing with the major system managers: Yong Y. Lee, Andrew McNerney, Rudy Damm, Andy Soukas, and John Hauser.

Looking to the future, the Booster would be a key element in Brookhaven’s design for a proposed Electron-ion Collider (EIC). That facility, if built, would capitalize on the Laboratory’s long history of accelerator expertise and be “a second renaissance,” Weng said. 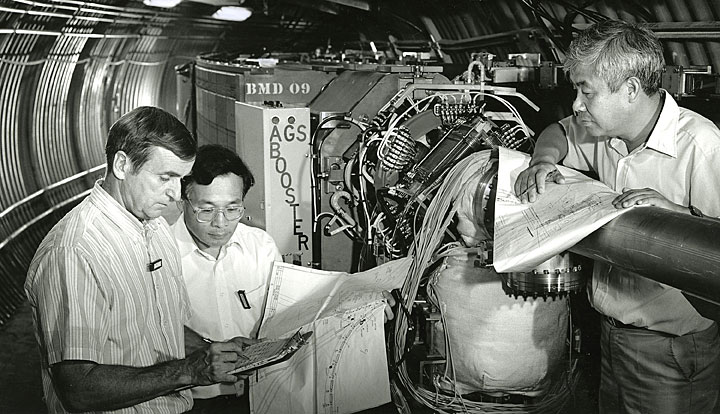 Andy McNerney, Bill Weng, and Y.Y. Lee inside the Booster tunnel in 1990 inspecting the space for the turbomolecular pump needed for the Booster to reach ultra-high vacuum