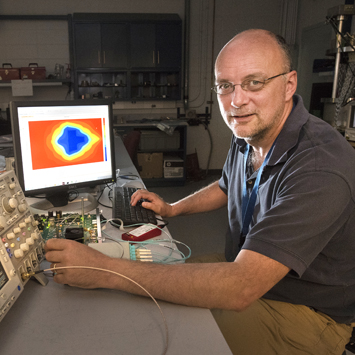 Francesco Lanni, a physicist in Brookhaven Lab’s Physics Department, was awarded tenure for his significant contributions to particle physics through the successful construction and operation of the ATLAS detector at the Large Hadron Collider that has enabled a rich physics program, including the discovery of the Higgs particle of the Standard Model. Lanni was also granted tenure in recognition of his innovative ideas and leadership of the advanced detector research and development programs that led to the ATLAS upgrade currently in progress.

“Francesco has emerged as one of the few worldwide leaders in the design and construction of state-of-the-art detectors for particle physics,” said Physics Department Chair Laurence Littenberg. “He has been instrumental from the inception to the implementation of technical solutions to requirements of the ATLAS detector.”

Lanni has been leading the efforts to upgrade the ATLAS detector’s liquid argon calorimeter, a device that measures energy deposited by particles produced in collisions. He conceived and developed an advanced electronics architecture to read out the signals from the calorimeter, and designed a new calorimeter trigger system that will enable the detector to continue operating in a high-radiation and high-collision-rate environment. Besides providing expertise on the calorimeter, he has contributed to the ATLAS upgrade by serving on the steering committee, chairing subcommittees and working groups, and editing important documentation. In parallel with these efforts, Lanni is actively involved in the development of detector technologies for other experiments, especially the liquid argon time-projection chamber for detecting low-energy neutrinos.

Lanni obtained his Ph.D. in particle physics from the University of Parma in Italy in 1995. From 1995 to 1998, he was a postdoc at the National Institute for Nuclear Physics in Milan, Italy. He came to Brookhaven Lab as an assistant physicist in 1998, and was promoted to associate physicist in 2000 and physicist in 2002. Since 2008, he has been the deputy group leader of Brookhaven’s Omega Group.