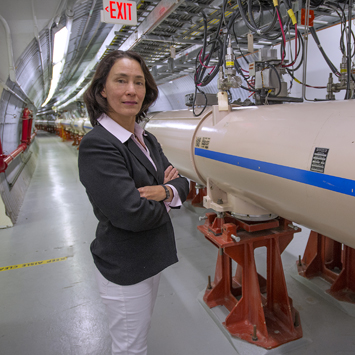 Michiko Minty, an accelerator physicist in Brookhaven Lab's Collider-Accelerator Department (C-AD), was awarded tenure for her significant contributions in designing, constructing, and operating complex user facilities, as well as her contributions to knowledge related to the purposes of the field of accelerator science.

"Michiko's ability to connect theoretical knowledge with practical, skilled implementation for accelerators has been key to achieving performance gains for RHIC," said C-AD Chair Thomas Roser. "Her understanding, skills, experience, and leadership are invaluable for the success of the future accelerator facilities at Brookhaven."

Minty established herself as a leader in accelerator instrumentation and as an educator for the next generation of accelerator scientists. She co-authored Measurement and Control of Charged Particle Beams, a first comprehensive and systematic review of all methods used for the measurement, correction, and control of the beam properties and dynamics of modern particle accelerators. For more than two decades, Minty has also regularly taught instrumentation topics at accelerator schools in the United States and around the world.

Michiko Minty has led the C-AD's Instrumentation Systems group at Brookhaven Lab since arriving in March 2008. She earned a Ph.D. in physics from Indiana University in 1991. She was a postdoc at Indiana University and the University of Michigan in 1991 and, at SLAC National Accelerator Laboratory, was a postdoc from 1991 to 1994 and a staff scientist from 1994 to 2000. She was a visiting scientist at the High Energy Accelerator Research Organization—KEK—in Japan in 1995 and at the Deutsches Electronen-Synchrotron (DESY) in Germany in 1999.  From 2000 to 2005 she worked at DESY as head of the DESY-2 and DESY-3 lepton and hadron synchrotrons.