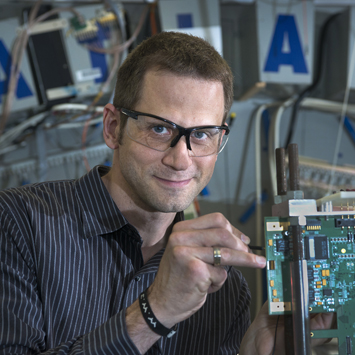 Marc-André Pleier, a physicist in Brookhaven Lab’s Physics Department, was awarded tenure for his significant contributions to tests of the Standard Model of particle physics by using data from hadron colliders to measure electroweak processes, particularly vector boson scattering with the ATLAS detector at the Large Hadron Collider (LHC).

“Marc-André was one of the first to analyze the early LHC collision data to observe the final state of WW di-bosons,” said Physics Department Chair Laurence Littenberg. “He quickly established himself as the leader of the analysis efforts in this area, which played an important role in the discovery of the Higgs boson—the particle associated with the Higgs field, which gives mass to elementary particles.”

Pleier has been directing research on interactions of W and Z bosons, elementary particles that carry the weak force. In 2014, he presented the first evidence of vector boson scattering, in which two W or Z bosons scatter off one another to form a pair. His other research areas include vector boson fusion and di-boson and tri-boson production. He has also been actively involved in the LHC upgrade, managing improvements to the liquid argon calorimeter trigger that will allow for the efficient study of particle collisions at higher luminosities. A well-recognized leader in the field of electroweak physics, Pleier has delivered invited talks, presented experimental results at international conferences, and organized workshops.

Pleier received his Ph.D. at the Max Planck Institute (MPI) for Nuclear Physics in Heidelberg in Germany, in 2002 and the title “Privatdozent” at the University of Bonn in 2009, following his habilitation. He began his career as an MPI postdoc, conducting research at the German Electron Synchrotron (DESY). Subsequently, he worked on the Fermilab D0 experiment, first as a Feodor Lynen Fellow of the Alexander von Humboldt Foundation at the University of Rochester and later as a research associate with teaching responsibilities at the University of Bonn Physics Institute, where he also joined the ATLAS experiment. He came to Brookhaven Lab in 2009 as an assistant physicist, and was promoted to associate physicist in 2011 and physicist in 2013.