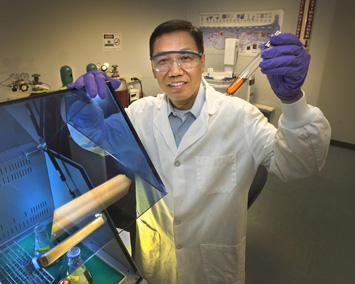 Changcheng Xu, a biologist in Brookhaven Lab's Biology Department, was awarded tenure for his achievements in the field of plant lipid research, specifically in the areas of lipid trafficking between subcellular compartments and understanding the mechanisms of lipid homeostasis and oil accumulation in leaves.

“Changcheng’s career has been a series of seminal discoveries published in top-tier journals,” said Biology Department Chair John Shanklin. “His work is closely aligned with the Department of Energy’s Basic Energy Sciences’ mission to secure our energy future.”

Xu studies lipid triacylglycerols stored in plant cells. Plant oil represents an ideal renewable resource because it is carbon neutral and chemically similar to fossil fuels. It is carbon neutral because plants convert atmospheric carbon dioxide into lipids, which are then released back into the atmosphere when used as a fuel. While plant oil biofuel makes sense environmentally, its economic feasibility is critically dependent on its yield of oil per acre.

In that regard, Xu has made remarkable progress. Using Arabidopsis plants and Chlamydomonas cells, he deciphered many of the regulatory factors and underlying principles that control lipid synthesis, degradation, and storage. Xu also conducted studies demonstrating the feasibility of increasing oil storage in leaves, in addition to seeds, thereby increasing the percentage of the plant’s biomass that stores lipids. In separate work with Chlamydomonas, he dispelled the belief that algae only produce oil when lacking certain nutrients, further illuminating the possibility of using them for fuel.