Thanks to a new development in nuclear physics theory, scientists exploring expanding fireballs that mimic the early universe have new signs to look for as they map out the transition from primordial plasma to matter as we know it. The theory work, described in a paper recently published as an Editor's Suggestion in Physical Review Letters (PRL), identifies key patterns that would be proof of the existence of a so-called “critical point” in the transition among different phases of nuclear matter. Like the freezing and boiling points that delineate various phases of water—liquid, solid ice, and steam—the points nuclear physicists seek to identify will help them understand fundamental properties of the fabric of our universe.

Nuclear physicists create the fireballs by colliding ordinary nuclei—made of protons and neutrons—in an “atom smasher” called the Relativistic Heavy Ion Collider (RHIC), a U.S. Department of Energy Office of Science User Facility at Brookhaven National Laboratory. The subatomic smashups generate temperatures measuring trillions of degrees, hot enough to “melt” the protons and neutrons and release their inner building blocks—quarks and gluons. The collider essentially turns back the clock to recreate the “quark-gluon plasma” (QGP) that existed just after the Big Bang. By tracking the particles that emerge from the fireballs, scientists can learn about nuclear phase transitions—both the melting and how the quarks and gluons “freeze out” as they did at the dawn of time to form the visible matter of today’s world.

"We want to understand the properties of QGP,” said nuclear theorist Raju Venugopalan, one of the authors on the new paper. “We don’t know how those properties might be used, but 100 years ago, we didn’t know how we’d use the collective properties of electrons, which now form the basis of almost all of our technologies. Back then, electrons were just as exotic as the quarks and gluons are now.”

RHIC physicists believe that two different types of phase changes can transform the hot QGP into ordinary protons and neutrons. Importantly, they suspect that the type of change depends on the collision energy, which determines the temperatures generated and how many particles get caught up in the fireball. This is similar to the way water’s freezing and boiling points can change under different conditions of temperature and the density of water molecules, Venugopalan explained.

In low energy RHIC collisions, scientists suspect that while the change in phase from QGP to ordinary protons/neutrons occurs, both distinct states (QGP and ordinary nuclear matter) coexist—just like bubbles of steam and liquid water coexist at the same temperature in a pot of boiling water. It’s as if the quarks and gluons (or liquid water molecules) have to stop at that temperature and pay a toll before they can gain the energy needed to escape as QGP (or steam).

In contrast, in higher energy collisions, there is no toll gate at the transition temperature where quarks and gluons must “stop.” Instead they move on a continuous path between the two phases.

But what happens between these low-energy and high-energy realms? Figuring that out is now one of the major goals of what’s known as the “beam energy scan” at RHIC. By systematically colliding nuclei at a wide range of energies, physicists in RHIC’s STAR collaboration are searching for evidence of a special point on their map of these nuclear phases and the transitions between them—the nuclear phase diagram.

At this so-called “critical point,” there would be a toll stop, but the cost would be $0, so the quarks and gluons could transition from protons and neutrons to QGP very quickly—almost as if all the water in the pot turned to steam in a single instant. This can actually happen when water reaches its boiling point under high pressure, where the distinction between the liquid and the compressed gas phases blurs to the point of the two being virtually indistinguishable. In the case of QGP, the physicists would expect to see signs of this dramatic effect—patterns in the fluctuations of particles observed striking their detectors—the closer and closer they get to this critical point.

In experiments already conducted at the intermediate energies, STAR physicists have observed such patterns, which may be signs of the hypothesized critical point. This search will continue with increased precision over a wider range of energies during a second beam energy scan, beginning in 2019. The new theoretical work of Brookhaven physicist Swagato Mukherjee, Venugopalan, and former postdoc Yi Yin (now at MIT)—part of a newly funded Beam Energy Scan Theory (BEST) Topical Collaboration in Nuclear Theory—will provide a roadmap to guide the experimental researchers.

Signposts to look for

Certain characteristics of the patterns that occur during phase changes are universal—no matter whether you are studying water, or quarks and gluons, or magnets. But one key advance of the new theory work was using a different set of universal characteristics to account for the dynamic conditions of the expanding quark-gluon plasma. 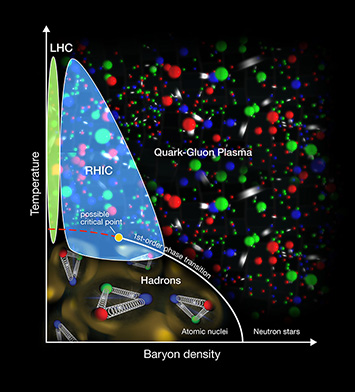 “All the predictions, the way we started looking for a critical point so far, were based on patterns calculated assuming you have a pot boiling on a stove—a somewhat static system,” said Mukherjee. “But QGP is expanding and changing over time. It’s more like water boiling as it flows rapidly through a pipe.”

To account for the evolving conditions of the QGP in their calculations, the theorists incorporated “dynamic universalities” that were first developed to describe similar pattern formation in the cosmological expansion of the universe itself.

“These ideas have since been applied to other systems like liquid helium and liquid crystals,” Venugopalan said. "Yin realized that the specific mechanisms of dynamic universality identified in cosmology and condensed matter systems can be applied to the search for the critical point in heavy ion collisions. This paper is the first explicit demonstration of this conjecture."

Specifically, the paper predicts exactly what patterns to look for in the data—patterns in how the properties of particles emitted from the collisions are correlated—as the energy of the collisions changes.

“If the STAR collaboration looks at the data in a particular way and sees these patterns, they can claim without any ambiguity that they have seen a critical point,” Venugopalan said.

The Beam Energy Scan Theory Collaboration and research at RHIC are supported by the DOE Office of Science.