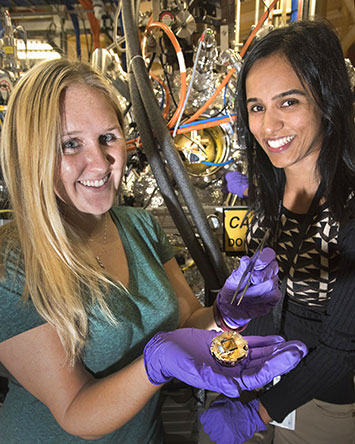 Sana Rani and Alicia Broderick are Ph.D. students in the Chemistry and Biochemistry Department at the University of Delaware and visiting users at the Coherent Soft X-ray 2 beamline at the National Synchrotron Light Source II.

Sana Rani and Alicia Broderick are Ph.D. students in the Chemistry and Biochemistry Department at the University of Delaware, and users of the Center for Functional Nanomaterials (CFN) and the National Synchrotron Light Source II (NSLS-II) at Brookhaven National Laboratory. During an experiment conducted at the the ambient pressure x-ray photoelectron spectroscopy (APXPS) endstation in the NSLS-II’s Coherent Soft X-Ray 2 (CSX-2) beamline earlier this year, they studied the compound zinc oxide. The APXPS endstation was built through a partnership between the CFN and NSLS-II, which are both DOE Office of Science User Facilities at Brookhaven.

Why are you studying zinc oxide?

Zinc oxide (ZnO) has a variety of applications in catalysis for hydrogenation and dehydrogenation, mainly via the interaction with small molecules such as carbon monoxide, carbon dioxide, hydrogen, and water. These molecules are relevant to the water-gas shift reaction, an important process used in industry to generate hydrogen, and the catalytic synthesis of methanol, a common industrial solvent. However, to date, little is known about the molecular-level interfacial chemistry of ZnO “terminations” – the various orientations of the different ZnO crystal structures – in the presence of water vapor near ambient conditions.

Why did you choose to conduct this study at NSLS-II?

A synchrotron, in tandem with APXPS, is a powerful tool that can probe surface oxidation states under varying gas phase compositions at pressures of up to several Torr. Moreover, we can gather quantitative information assessing the effects of gases on oxidation states. While APXPS has been used to investigate water adsorption and reaction on a number of metal oxide surfaces, little information exists about the extent to which water adsorbs and dissociates on different terminations of the same metal oxide interface. To address whether the water reacts beyond the surface depth, we can vary the x-ray energy and probe different peaks to quantitatively assess the hydroxylation, which is when a thin layer of hydroxide gradually forms on the material's surface as a function of relative humidity. In the case of ZnO, we want to know when the hydroxylation starts and whether it is different than what has been observed in other metal oxides.

We are fortunate that the world's best light source is so geographically close to our university, saving us the time and money it would take to travel to another synchrotron. In the future, we hope to use the same beamline at NSLS-II to examine the interaction between ionic liquids and water vapor as a function of probing depth. To understand water uptake to an ionic liquid interface, the APXPS setup at CSX-2 will allow us to do depth profiling of water at the ionic liquid-vapor interface, with the goal of understanding of the concentration profile of water in the interfacial region of ionic liquids.

Tell us about your research interests, your current work, and what led you to this field of study.

I earned my undergraduate degree in physics and was later employed as a scientific research officer at a national research institute in Pakistan. This opportunity was my initial exposure to a variety of materials and where I analyzed thousands of samples using electron microscopes. I enjoyed teaching myself about the theory behind the instrumentation, planning research projects, and conducting experiments.

My interest in synchrotron research and its protocols blossomed during my work at the Advanced Light Source at Lawrence Berkeley National Lab, where I studied as a research scholar from 2012 to 2014. I worked at beamline 9.3.2 under the supervision of Dr. Zahid Hussain and Dr. Zhi Liu. During that time, I had firsthand experience with APXPS. I used soft x-rays to investigate various catalytic processes, fuel cells, and other energy-related research, as well as environmental science and semiconductor technology. I was also involved in the construction of a new APXPS endstation capable of operating at pressures above 110 Torr and using “tender” x-rays (2.5 keV – 5 keV) at bending-magnet beamline 9.3.1.

I am currently pursuing my doctoral degree in Physical Chemistry at the University of Delaware as a member of Dr. John Newberg's research group. I am focusing my research on in situ and in operando APXPS to understand the interaction of water with different metal oxides. It is anticipated that adsorbed water and/or hydroxyl groups on metal oxide interfaces significantly impact heterogeneous catalytic reactions and environmental surface reactions under ambient conditions. I am also working on a collaborative project where we are trying to understand the surface chemistry of a newly synthesized photocatalyst for carbon dioxide reduction utilizing a recently commissioned state-of-the-art APXPS setup in Dr. Newberg's lab.

I received my bachelor’s degree in chemistry from Stockton University in Pomona, NJ. I was sponsored as an intern by the Visiting Scientist Program at the U.S. Department of Homeland Security’s Transportation Security Laboratory. The program is managed for DHS by the Oak Ridge Institute for Science and Education to conduct analytical laboratory work on explosives.

After graduation, I obtained a post-baccalaureate position continuing this research. During this time, I became interested in environmental chemistry and decided to pursue a doctorate degree in analytical chemistry with a focus in environmental science. My current work utilizes lab-based APXPS to study water uptake into ionic liquids, with a heavy focus on hydrophilic ionic liquids. Water uptake appears to play a role in the bulk absorption of other gases, particularly CO2. Bulk absorption requires the gases to pass the ionic liquid-gas interface, and more studies are needed to assess the concentration profile of water in the interfacial region. Depth profile studies at NSLS-II would complement our lab-based x-ray studies by providing a concentration profile of water as a function of depth.