Cellulose nanocrystals are nanomaterials that are derived from natural sources, including waste wood pulp originating from the paper production and forestry industries. These renewable nanomaterials hold great promise for the low-cost deployment of advanced technologies, such as chiral magneto-optical materials and biosensors. This work used the advanced characterization method of small-angle X-ray scattering to understand the alignment and ordering of rod-shaped cellulose nanocrystals placed in the presence of a magnetic field. Monitoring the in situ reorganization of these nanomaterials revealed an intriguing cooperative ordering phenomenon. The application of a magnetic field enabled control of the ordering and alignment of the nanomaterials, even in a weak field.

Improved recognition and control over the ordering and alignment of these naturally derived nanomaterials broadens the range of applications that can be targeted. For example, tissue engineering scaffolds containing oriented cellulose nanocrystals may have the potential to promote directional cell growth and orientation-induced differentiation. However, nearly perfect orientation of the nanocrystals is required. This work demonstrated that cooperative ordering occurs in these systems, amplifying the alignment force of even very weak magnetic fields.

X-ray scattering measurements were used to characterize the alignment of cellulose nanocrystals within a magnetic field. A custom-built sample holder was used to perform the in situ magnetic field experiments. The kinetics of nanoparticle ordering demonstrate rapid cooperative interactions, even in the presence of a weak magnetic field.

CFN Capabilities: The lab-scale x-ray scattering instrument in CFN’s Materials Synthesis and Characterization Facility was used to study ordering behavior. Additionally, a custom sample holder, incorporating permanent magnets, was fabricated to enable the in situ study of nanomaterials within a magnetic field. 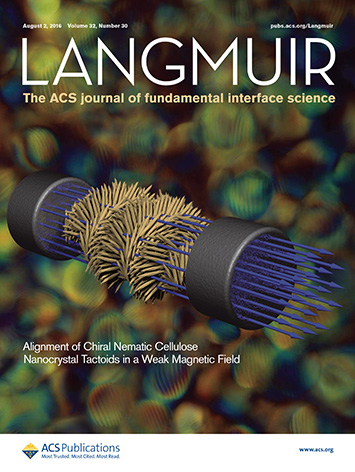 Cellulose nanocrystals are rod-like nanoparticles derived from naturally occurring and renewable cellulose sources: trees. In fact, these nanocrystals can be generated from cellulose stocks that would otherwise be discarded by industry—for instance, from the wood pulp waste stream produced by the paper industry. Thus, cellulose nanocrystals are an exciting candidate for the low-cost deployment of advanced nanomaterials. Because of their chiral nature, these nanomaterials may be ideal for advanced applications, including tuning chiral optical properties of materials, biosensing, and nanofiltration. As with any nanomaterial, the ability to control the ordering of the nanoscale objects in a cheap and easy way is critical to enabling advanced applications. Cellulose nanocrystals are known to be responsive to intense magnetic fields, anti-aligning themselves with respect to the field direction.

We thank Yugang Zhang and Dmytro Nykypanchuk for assistance with the in situ magnetic cell and Professor Jose Moran-Mirabal for assistance with polarized optical microscopy experiments. This research used resources of the Center for Functional Nanomaterials, which is a U.S. DOE Office of Science Facility, at Brookhaven National Laboratory under contract no. DE-SC0012704.