UPTON, NY - Those seeking to design more efficient catalysts for the production of hydrogen and the control of air pollutants might do well to take a closer look at how chemistry works in nature, scientists at the U.S. Department of Energy's Brookhaven National Laboratory say. Their theoretical investigations of a bacterial enzyme reveal a catalytic complex with higher predicted chemical reactivity than that of industrial catalysts currently in use. The results of the team's theoretical analysis will be published online by the Journal of Physical Chemistry B the week of January 24, 2005. 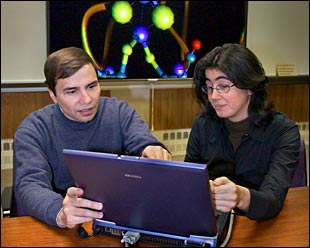 "We wanted to establish how the biological system works, and then compare it with materials currently used in industry for these chemical processes - and we found that the biological system is indeed better," said Brookhaven chemist Jose Rodriguez, lead author of the paper. "The challenge now is whether we can reproduce this more efficient system for use in an industrial setting." Added Brookhaven biochemist Isabel Abreu, the paper's second author, "We are learning from nature what is working in nature, and then trying to use that for the design of other processes."

The complex described is a particular configuration of iron and sulfur atoms and the surrounding amino acids in an enzyme isolated from Desulfovibrio desulfuricans, a bacterium that can live in sulfur-rich environments without oxygen. The specific chemical function of the iron-sulfur complex in this bacterial enzyme is not yet known, but similar complexes of iron and sulfur play an important role in many enzymes, catalysts, and sensors.

Earlier studies by Abreu and coworkers suggested that, unlike iron-sulfur complexes found in other proteins, which are usually bound to four surrounding cysteine amino acids, the iron-sulfur complex from D. desulfuricans appeared to have only three bound cysteine neighbors. "This opened up the possibility of interesting chemical properties," Abreu said.

Rodriguez and Abreu's first step was to use "density functional calculations" to establish if a structural model previously proposed by Abreu for the three-cysteine configuration was theoretically stable enough to exist in nature, and then to investigate how that structure might influence the reactivity of the iron-sulfur complex. In agreement with the predicted model, they found that the three-cysteine structure was indeed stable, leaving the iron-sulfur complex, located in a surface pocket of the bacterial enzyme, exposed on one side.

Next, the scientists tested the theoretical chemical reactivity of the complex with a variety of reactants important in either the production of hydrogen or the control of air pollution. Finally, they compared those results with the reactivity of other iron-sulfur-complex catalysts, including those that are currently used for these catalytic processes in industry.

"Our calculations predict that this particular unit should be four to five times more reactive than the catalysts currently used, which is very significant," Rodriguez said. "With this structure, the key is that you have an open side of the molecule to bind things and do chemistry because it is missing one cysteine neighbor - you can make it react with other things."

The next challenge will be to see if the scientists can use the enzyme or synthesize a mimic of its cysteine-iron-sulfur center - an engineering project on the nanoscale (i.e., measured in billionths of a meter).

"Even if we can't use this exact enzyme, then maybe we could create other molecules or particles with this type of structure using synthetic methods," Abreu said.

This type of work - synthesizing, studying, and fine-tuning the properties of nanoscale catalytic systems - will be a major research focus at Brookhaven Lab's Center for Functional Nanomaterials (CFN), construction of which is scheduled to begin this year.

"Once you have the nanoparticles, you can do the testing with the catalytic reactions," Rodriguez says. "Then, if they work the way the theory predicts, then you have something that is really useful."