UPTON, NY - The U.S. Department of Energy's (DOE) Brookhaven National Laboratory has won a 2006 R&D 100 award for developing the first device able to focus a large spread of high-energy x-rays. The device, called a Sagittal Focusing Laue Monochromator, could be used in about 100 beamline facilities around the world to conduct scientific research in physics, biology, nanotechnology, and numerous other fields.

R&D 100 Awards are given annually by R&D Magazine to the top 100 technological achievements of the year. Typically, these are innovations that transform basic science into useful products. The awards will be presented in Chicago on October 19. 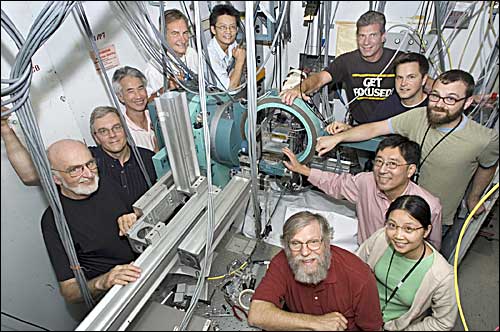 "I congratulate the researchers who have won this award, which highlights the power and promise of DOE's investments in science and technology," Secretary of Energy Samuel W. Bodman said about the BNL team. "Through the efforts of dedicated and innovative scientists and engineers at our national laboratories, DOE is helping to enhance our nation's energy, economic and national security."

As x-rays are produced at light sources, they spread out, or diverge. X-rays produced by a beamline with a 5 milliradian divergence, for example, will spread to 5 millimeters (mm) by the time they are 1 meter away from their source, and to 50 mm when 10 meters away. This is a problem for light source scientists, who want the highest possible x-ray flux on a small spot, which requires a well-focused beam.

Previous x-ray focusing technologies relied on mirror-like surface reflections, but this required large surfaces and caused technical difficulties in error control and limitations on the energy of the x-rays that could be focused. The device developed by Zhong's team, however, doesn't rely on a crystal surface to reflect the beam. Instead, it sends the x-rays directly through a set of silicon Laue crystals, named for German physicist Max von Laue. The result is a 1,000-fold increase in beam intensity, as well as high-energy resolution, reduced costs and ease of operation, Zhong said.

The device consists of two thin bent crystals mounted on a slide, with the first one diffracting upward and the second one diffracting downward to focus the beam horizontally. It is the first device that can focus a large divergence of high-energy x-rays, handling a beamline with a divergence as great as 20 milliradian.

"This is a very elegant solution to an existing problem," said Zhong, who started working on the project in 2001. The first version of the device is installed at the NSLS beamline X17B1 and is gaining interest from members of other Brookhaven beamlines and scientists at light sources around the world. Development of the award-winning device was supported by the Office of Basic Energy Sciences within the U.S. Department of Energy's Office of Science.