First Direct Evidence that Response to Alcohol Depends on Genes

UPTON, NY — Many studies have suggested that genetic differences make some individuals more susceptible to the addictive effects of alcohol and other drugs. Now scientists at the U.S. Department of Energy’s (DOE) Brookhaven National Laboratory provide the first experimental evidence to directly support this idea in a study in mice reported in the October 19, 2010, issue of Alcoholism Clinical Experimental Research. 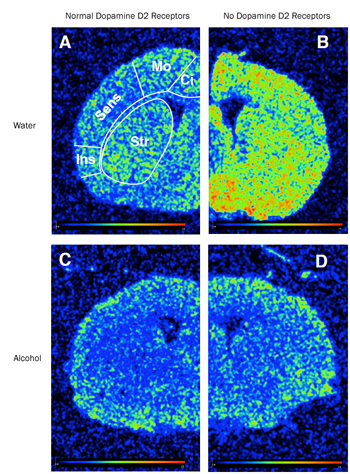 The study compared the brain’s response to long-term alcohol drinking in two genetic variants of mice. One strain lacked the gene for a specific brain receptor known as dopamine D2, which responds to dopamine, the brain’s “feel good” chemical, to produce feelings of pleasure and reward. The other strain was genetically normal. In the dopamine-receptor-deficient mice (but not the genetically normal strain), long-term alcohol drinking resulted in significant biochemical changes in areas of the brain well know to be involved in alcoholism and addiction.

“This study shows that the effects of chronic alcohol consumption on brain chemistry are critically influenced by an individual’s pre-existing genetic makeup,” said lead author Panayotis (Peter) Thanos, a neuroscientist with Brookhaven Lab and the National Institute on Alcohol Abuse and Alcoholism (NIAAA) Laboratory of Neuroimaging. “Our findings may help explain how someone’s genetic profile can interact with the environment — in this case, chronic alcohol drinking — to produce these changes only in some individuals, but not in others with a less vulnerable genetic profile. The work supports the idea that genetic screening could provide individuals with valuable information relevant to understanding risks when deciding whether or not to consume alcohol.”

The scientists were particularly interested in the dopamine system because a wide range of studies at Brookhaven and elsewhere suggest that deficiency in dopamine D2 receptors may make people (and animals) less able to experience ordinary pleasures and more vulnerable to alcoholism, drug abuse, and even obesity. The ability to breed mice completely lacking the D2 gene — and carefully control and monitor their alcohol intake — made it possible to test the effect of this genetic influence on the brain’s response to chronic alcohol drinking for the first time in this study. 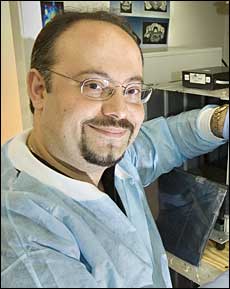 The scientists studied mice lacking the dopamine D2 gene and genetically normal mice, all males. They divided these groups further, giving half of each group only water to drink, and the other half a solution of 20 percent ethanol to simulate heavy drinking.

After six months, the scientists compared the levels of a different kind of brain receptor known as cannabinoid type 1 (CB1) in various parts of the brain in all four groups. CB1 receptors are located near dopamine receptors and are also known to play a role in alcohol consumption and addiction. Many findings indicate that the two types of receptors may influence one another.

In the current study, the scientists found that water-drinking animals without D2 receptors had increased, or up-regulated, levels of CB1 receptors in brain regions associated with addiction, compared with water-drinking normal control animals. “That may mean that active D2 receptors in normal mice somehow inhibit the expression of the CB1 gene; and therefore, the absence of D2 leads to increased CB1 expression,” Thanos said.

Chronic alcohol consumption, however seemed to negate this effect: D2-deficient mice that drank alcohol showed about half the CB1 levels compared to the D2-deficient water drinkers.

Individuals experiencing lower-than-normal reinforcement, or reward, in response to a drug may be more likely than those experiencing a normal response to seek out further stimulation of the brain’s reward centers by continued or increasing use of the drug.

To test this hypothesis, future research will explore the effects of CB1 down-regulation on animals’ drinking behavior when given a choice between alcohol and water. The scientists will also conduct similar studies in female mice to investigate the role of gender on the observed findings.

“Further research on the relationship and interaction between genetic makeup and environment will help us better understand the chronic disease of addiction in terms of a series of risk factors that may elevate a person’s vulnerability. This information will be imperative to the public and will help people make more informed decisions about their behaviors,” Thanos said.

This research was funded by NIAAA. In addition to Thanos, who is jointly supported by Brookhaven Lab and NIAAA, co-authors include: Vanessa Gopez, Foteini Delis, and Gene-Jack Wang of Brookhaven Lab; Michael Michaelides of Brookhaven and Stony Brook University; David K. Grandy of Oregon Health and Science University; George Kunos and Nora Volkow, researchers from NIAAA.

All research involving laboratory animals at Brookhaven National Laboratory is conducted under the jurisdiction of the Lab’s Institutional Animal Care and Use Committee in compliance with the Public Heath Service (PHS) Policy on Humane Care and Use of Laboratory Animals, the U.S. Department of Agriculture's Animal Welfare Act, and the National Academy of Sciences’ Guide for the Care and Use of Laboratory Animals. This research has enhanced understanding of a wide array of human medical conditions including cancer, drug addiction, Alzheimer's and Parkinson's diseases, and normal aging and has led to the development of several promising treatment strategies.