Expanding the Degrees of Surface Freezing 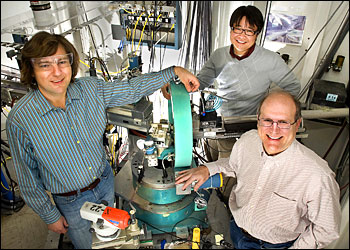 Alexei Tkachenko, Htay Hlaing and Ben Ocko at an experimental end station at the NSLS.

UPTON, NY — As part of the quest to form perfectly smooth single-molecule layers of materials for advanced energy, electronic, and medical devices, researchers at the U.S. Department of Energy’s Brookhaven National Laboratory have discovered that the molecules in thin films remain frozen at a temperature where the bulk material is molten. Thin molecular films have a range of applications extending from organic solar cells to biosensors, and understanding the fundamental aspects of these films could lead to improved devices.

The study, which appears in the April 1, 2011, edition of Physical Review Letters, is the first to directly observe “surface freezing” at the buried interface between bulk liquids and solid surfaces.

“In most materials, you expect that the surface will start to disorder and eventually melt at a temperature where the bulk remains solid,” said Brookhaven physicist Ben Ocko, who collaborated on the research with scientists from the European Synchrotron Radiation Facility (ESRF), in France, and Bar-Ilan University, in Israel. “This is because the molecules on the outside are less confined than those packed in the deeper layers and much more able to move around. But surface freezing contradicts this basic idea. In surface freezing, the interfacial layers freeze before the bulk.”

In the early 1990s, two independent teams (one at Brookhaven) made the first observation of surface freezing at the vapor interface of bulk alkanes, organic molecules similar to those in candle wax that contain only carbon and hydrogen atoms. Surface freezing has since been observed in a range of simple chain molecules and at various interfaces between them.

“The mechanics of surface freezing are still a mystery,” said Bar Ilan scientist Moshe Deutsch. “It’s puzzling why alkanes and their derivatives show this unusual effect, while virtually all other materials exhibit the opposite, surface melting, effect.”

In the most recent study, the researchers discovered that surface freezing also occurs at the interface between a liquid and a solid surface. In a temperature-controlled environment at Brookhaven’s National Synchrotron Light Source and the ESRF, the group made contact between a piece of highly polished sapphire and a puddle of liquid alkanol — a long-chain alcohol. The researchers shot a beam of high-intensity x-rays through the interface and by measuring how the x-rays reflected off the sample, the group revealed that the alkanol molecules at the sapphire surface behave very differently from those in the bulk liquid. 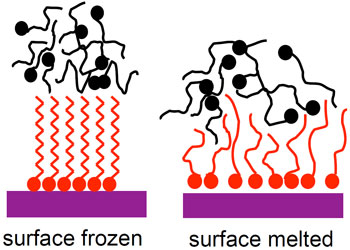 Schematic representation of the alkanol monolayer when frozen (left) and melted (right).

According to ESRF scientist Diego Pontoni, “Surprisingly, the alkanol molecules form a perfect frozen monolayer at the sapphire interface at temperatures where the bulk is still liquid.” At sufficiently high temperatures, about 30 degrees Celsius above the melting temperature of the bulk alkanol, the monolayer also melts.

The temperature range over which this frozen monolayer exists is about 10 times greater than what’s observed at the liquid-vapor interfaces of similar materials. According to Alexei Tkachenko, a theoretical physicist who works at Brookhaven’s Center for Functional Nanomaterials, “The temperature range of the surface-frozen layer and its temperature-dependent thickness can be described by a very simple model that we developed. What is remarkable is that the surface layer does not freeze abruptly as in the case of ice, or any other crystal. Rather, a smooth transition occurs over a temperature range of several degrees.”

Said Ocko, “These films are better ordered and smoother than all other organic monolayer films created to date.”

Moshe Deutsch added, “The results of this study and the theoretical framework which it provides may lead to new ideas on how to make defect-free, single molecule-thick films.”

Funding for this work was provided by the U.S. Department of Energy’s Office of Science and the U.S.-Israel Binational Science Foundation.