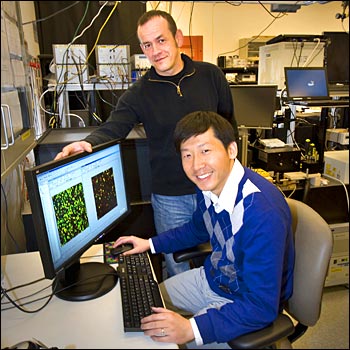 “This is the first demonstration of a hybrid inorganic/organic, dimeric (two-particle) material that acts as an electron donor-bridge-acceptor system for converting light to electrical current,” said Brookhaven physical chemist Mircea Cotlet, lead author of a paper describing the dimers and their assembly method in Angewandte Chemie.

By varying the length of the linker molecules and the size of the quantum dots, the scientists can control the rate and the magnitude of fluctuations in light-induced electron transfer at the level of the individual dimer. “This control makes these dimers promising power-generating units for molecular electronics or more efficient photovoltaic solar cells,” said Cotlet, who conducted this research with materials scientist Zhihua Xu at Brookhaven’s Center for Functional Nanomaterials (CFN).

Scientists seeking to develop molecular electronics have been very interested in organic donor-bridge-acceptor systems because they have a wide range of charge transport mechanisms and because their charge-transfer properties can be controlled by varying their chemistry. Recently, quantum dots have been combined with electron-accepting materials such as dyes, fullerenes, and titanium oxide to produce dye-sensitized and hybrid solar cells in the hope that the light-absorbing and size-dependent emission properties of quantum dots would boost the efficiency of such devices. But so far, the power conversion rates of these systems have remained quite low. 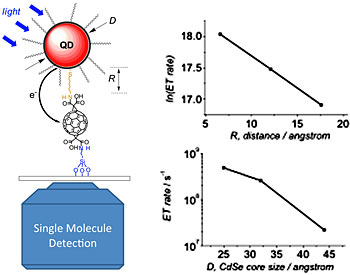 “Efforts to understand the processes involved so as to engineer improved systems have generally looked at averaged behavior in blended or layer-by-layer structures rather than the response of individual, well-controlled hybrid donor-acceptor architectures,” said Xu.

The precision fabrication method developed by the Brookhaven scientists allows them to carefully control particle size and interparticle distance so they can explore conditions for light-induced electron transfer between individual quantum dots and electron-accepting fullerenes at the single molecule level.

The entire assembly process takes place on a surface and in a stepwise fashion to limit the interactions of the components (particles), which could otherwise combine in a number of ways if assembled by solution-based methods. This surface-based assembly also achieves controlled, one-to-one nanoparticle pairing.

To identify the optimal architectural arrangement for the particles, the scientists strategically varied the size of the quantum dots — which absorb and emit light at different frequencies according to their size — and the length of the bridge molecules connecting the nanoparticles. For each arrangement, they measured the electron transfer rate using single molecule spectroscopy.

“This method removes ensemble averaging and reveals a system’s heterogeneity — for example fluctuating electron transfer rates — which is something that conventional spectroscopic methods cannot always do,” Cotlet said.

“This suppression of electron transfer fluctuation in dimers with smaller quantum dot size leads to a stable charge generation rate, which can have a positive impact on the application of these dimers in molecular electronics, including potentially in miniature and large-area photovoltaics,” Cotlet said.

“Studying the charge separation and recombination processes in these simplified and well-controlled dimer structures helps us to understand the more complicated photon-to-electron conversion processes in large-area solar cells, and eventually improve their photovoltaic efficiency,” Xu added.

A U.S. patent application is pending on the method and the materials resulting from using the technique, and the technology is available for licensing. Please contact Kimberley Elcess at (631) 344-4151 for more information.