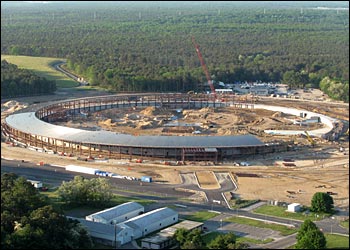 Ready for research in 2015, NSLS-II will be one of the world’s most advanced light sources, providing sophisticated new tools for science that will enhance national and energy security and help drive abundant, safe and clean energy technologies.

Seen from above, NSLS-II is a giant ring nearly half a mile in circumference. The ring will be filled with magnets that form the core of an electron accelerator. NSLS-II will work by guiding an intense beam of electrons through the center of each magnet, where powerful magnetic fields will contain and steer the particles in a nearly circular path. Light emitted by electrons traveling around the ring will be shunted to beamlines, a collection of scientific instruments used to do experiments.

“We are excited to be working with AES,” said Jim Rose, lead scientist in charge of the new components to be built by AES. “The company has a good track record in making high-tech accelerator systems, and they have provided excellent accelerator components for Brookhaven Lab on earlier occasions.”

Over a two-year period, Advanced Energy Systems (AES) will build two devices called radio frequency (RF) cavities, in which electric currents oscillate at the frequency of radio waves. These RF cavities are special because they are made of niobium, a type of metal that, when cooled to 4.5 kelvins (minus 451 degrees Fahrenheit), conducts electricity with nearly zero resistance. This phenomenon is known as superconductivity.

With this relatively new technology of RF-superconductivity, the very high accelerating fields needed at NSLS-II will be generated with high efficiency. The AES cavities will produce the required 4 million volts of accelerating voltage with only a few hundreds of watts dissipated in the cavities. Compared to conventional copper cavities, which would dissipate many hundreds of kilowatts, superconducting cavities provide significant energy savings over the life of the accelerator.

The RF system will provide up to 540 kilowatts of power (1 kilowatt equals 1,000 watts) to the electron beam in the NSLS-II ring. A future upgrade is envisioned for the facility’s final configuration, which will require two additional cavities.

In carrying out this work for NSLS-II, AES is partnering with Meyer Tool and Manufacturing, Inc., outside Chicago. AES is also collaborating with Cornell University, which developed the cavities in the 1990s and licenses them for production.

“This is a very important project for AES’s growth,” said Tony Favale, President and CEO of AES. “It follows a natural progression of past achievements in underlying technology areas and enables AES to bring these together in one package.”

According to Favale, AES has added 19 new employees in the past 18 months and is still looking to hire project, design and analytical engineers, as well as an RF technician. The project will also create several jobs at Meyer Tool.

Under its contract, AES will build two turnkey systems, each with a niobium superconducting cavity enclosed in a module to keep the cavity super cold. As part of the production process, the niobium cavities will undergo a high-pressure water rinse at a newly constructed facility at AES, partially funded by Brookhaven Science Associates, which manages Brookhaven Lab for the Energy Department, and by New York’s Empire State Development Corporation. Next, the cavities will undergo a vertical cryogenic test at Brookhaven Lab. AES will then complete the assembly, install the cavities in the NSLS-II and commission them under guidance from NSLS-II staff.