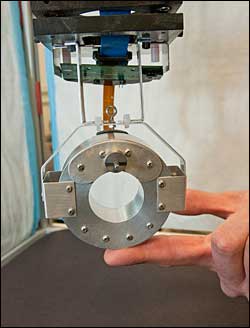 This small-scale PET scanner will advance research on conditions such as cancer, Alzheimer’s, and Parkinson’s disease.

UPTON, NY — SynchroPET, a Long Island startup company, has entered into an option agreement to commercialize a new small-scale, portable brain-imaging device invented by scientists at the U.S. Department of Energy’s Brookhaven National Laboratory. The miniaturization of a positron emission tomography (PET) scanner allows for a dynamic range of new applications, including integration with magnetic resonance imaging (MRI) and compact scanners that can be “worn” by fully conscious, active rats. These new ways to “see” inside the body offer the promise of a deeper understanding of the brain and the diseases that affect it and other organs.

Prior to the development of the wearable scanner, PET scans required animals to be immobilized or unconscious, preventing the simultaneous study of neurochemistry and conscious movement. The initial invention, dubbed RatCAP (Rat Conscious Animal PET), overcame that obstacle. This high-tech, custom-built collar made up of detectors that monitor brain chemistry enables correlation of that information with the animal’s activity in real-time.

“This device is the result of more than 10 years of work here at Brookhaven Lab and is the first in the world with this capability,” said David Schlyer, one of the Brookhaven Lab scientists who led the project. “The measurement of chemical messengers in the brain is important to understanding many different diseases and conditions such as drug addiction and movement disorders like Parkinson’s disease.”

The group has since applied the same modular technology to other new devices, including a PET insert that interfaces directly with existing MRI scanners to provide dual imaging of breast cancer tumors. By simultaneously conducting two scans, the invention is designed to increase clinical confidence in MRI findings and help guide biopsies. 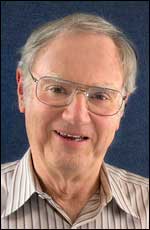 “These other devices we are building have direct applications in human health – making it possible, for example, to carry out much more accurate diagnostic procedures for some types of cancer,” Schlyer said.

Local entrepreneurs Marc Alessi and Burke Liburt formed SynchroPET around this new technology, optioning the inventions for six months. The option agreement provides exclusive time for the company to investigate the market potential for the portable scanners and complete a business plan.

“When I read about the potential commercial applications of the core technology and pondered not only the potential profit, but also the positive impact on people’s lives in terms of cancer, Alzheimer’s, and Parkinson’s — diseases that hit close to home for me — I knew I had to get involved with bringing this exciting new technology to market,” Alessi said. These inventions, he added, have the potential to “revolutionize our research and treatment of disease.”

The agreement with SynchroPET is the first option signed with Brookhaven Lab through the DOE program called “America’s Next Top Energy Innovator” challenge, part of the Obama Administration’s Startup America Initiative, which concluded in December 2011. By limiting the required paperwork and significantly lowering the cost to license technology developed at the DOE national laboratories, the program aimed to encourage the launch of startup companies. This PET device was featured at a showcase sponsored by Accelerate Long Island, an initiative to help launch businesses that commercialize inventions from research institutions on Long Island.

“Our top priority is to see that this technology continues to advance,” said Poornima Upadhya, the licensing associate in Brookhaven’s Office of Technology Commercialization and Partnerships (TCP) who is helping coordinate the collaboration between SynchroPET and the Lab. “We needed an industry partner to help develop the scanner and take it to the market. This is a step forward for Brookhaven and for the community.”

Alessi and Liburt are currently seeking their first round of funding and communicating with potential clients for the technology. Since SynchroPET optioned the technology, it has worked with the Lab to develop four working prototypes, with applications for both medical research and clinical diagnosis. They plan to move the prototypes into early validation, a process of testing the inventions and generating feedback from future customers.

“The easy working relationship we have with the Lab and DOE has encouraged us to continue to work on this technology,” Alessi said.

Schlyer added, “We are optimistic that these devices will make a difference in people’s health care and therefore be of real value to society.”

The initial RatCAP technology was developed with funding from the DOE Office of Science.