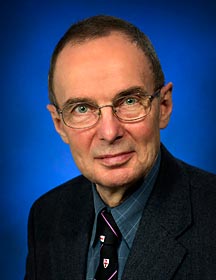 Smith, who leads the Gas and Liquid Detector group in the division, was chosen for his new position for his long experience in the division, his expertise in the development of gaseous neutron counters, and the fundamental advances he has made in designing detectors for x-rays, thermal neutrons, and charged particles.

The mission of the Instrumentation Division, with a staff of around 40, is to develop state-of-the-art instrumentation required for experimental research programs at Brookhaven Lab and elsewhere, and to maintain the expertise and facilities in specialized high technology areas essential for this work. The focus is on three major research areas: radiation detectors (using solid, liquid, or gas media); microelectronics; and laser, optical, and microfabrication applications. Core technologies in which Instrumentation staff are especially proficient include:

“The Instrumentation Division has made key contributions to experiments in many corners of the Lab, and beyond,” said Smith. “In addition to particle detector sub-systems at the Relativistic Heavy Ion Collider [RHIC] and x-ray detector systems at the National Synchrotron Light Source [NSLS], we’ve developed photo-cathodes for the Laser-Electron Accelerator Facility in the Brookhaven Chemistry Department and particle accelerators worldwide; detector systems for protein crystallography studies at Los Alamos National Laboratory; and medical imaging systems for Brookhaven’s Biosciences Department, and many others.”

Smith attributes the vitality of the Division's research activities to a combination of the astute vision of Radeka, and the talents and dedication of the staff.

"Veljko has always had a shrewd idea of which research directions are worth following," said Smith. "For example, he appreciated the incredible promise of ASICs well before it was fashionable, and invested wisely in human and material resources. ASICs are becoming ubiquitous, and permit small and large-scale science experiments that would otherwise not be possible. Our ASICs group presently provides unique expertise that benefits a broad range of Brookhaven Lab’s research programs, as well as work for others, while simultaneously contributing to the Lab’s technology transfer portfolio.

“A challenge we face for the future,” said Smith, “is choosing scientific challenges in which we can make a similar, singular impact, and it is important that we take note of the Laboratory's shifting priorities, such as energy storage and sustainability."

The Division has positioned itself to play leading roles in major particle physics and astrophysics projects, for example, in studies of neutrinos using the MicroBoone experiment and the proposed Long Baseline Neutrino Experiment (both at Fermilab), and in the Large Synoptic Survey Telescope, in which Instrumentation is responsible for the 3200-megapixel camera that will image faint astronomical objects to learn more about dark matter and dark energy.

Smith’s major scientific accomplishments include measuring the fundamental limits of gas-filled detectors, which enables researchers using synchrotron light sources like the NSLS to obtain the highest resolution images possible of their samples. He also developed novel cathode-readout principles that minimize the number of readout channels on detectors, thus reducing construction expense while retaining important experimental properties needed in x-ray and neutron detectors, as well as in large particle detectors such as PHENIX at RHIC, and ATLAS at the Large Hadron Collider in Europe. In addition, he has developed complete neutron detector systems that are currently being used in major neutron research facilities in the U.S. and Australia.

Smith earned a B.Sc. in 1970 and Ph.D. in 1974, both in physics, from Durham University, England. Beginning in 1973, he was a research associate at the University of Leicester, England, before joining Brookhaven Lab as an associate physicist in the Instrumentation Division in April 1982. Currently a senior physicist with tenure, Smith received the Lab’s Distinguished Research and Development Award in 1996 and the Institute of Electrical and Electronic Engineers’ (IEEE) Long Island Regional Award for Contributions to High Energy Physics in 1998. Smith is an IEEE Fellow and has played major roles in the organization of annual IEEE conferences.