The Deutsches Elektronen-Synchrotron (DESY) issued the following release on Jan. 24. X-ray investigation of the painting was partially done at the National Synchrotron Light Source (NSLS) at Brookhaven National Laboratory, a user facility supported by the U.S. Department of Energy Office of Science. 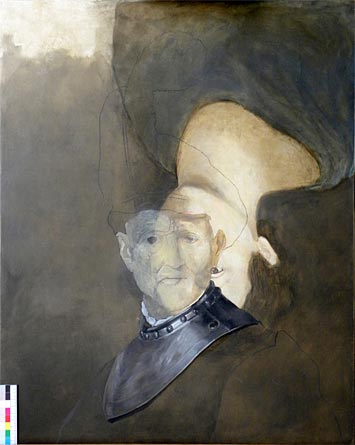 Mock-up of Rembrandt's "An old man in military costume" with a portrait painted underneath the final work. Photo: Andrea Sartorius, © J. Paul Getty Trust (free for editorial use if credit is given)

A sophisticated X-ray technology is paving the way to uncover the secrets of a 380-year-old Rembrandt masterpiece. Underneath the Old Man in Military Costume, painted by the Dutch artist in the years 1630-31, previous investigations spotted another portrait which was only faintly distinguishable with all applied technologies. For years, art historians puzzled over the question of who is depicted on the repainted picture.

Now, an international team of scientists has used a detailed mock-up to test different methods of looking beneath the original painting at DESYs X-ray source DORIS and at the National Synchrotron Light Source (NSLS) at Brookhaven National Laboratory (BNL) in the United States, as well as with a mobile X-ray scanner. The results are published as the cover story of the "Journal of Analytical Atomic Spectrometry" (JAAS) of the British Royal Society of Chemistry.

"Our experiments demonstrate a possibility of how to reveal much of the hidden picture," said first author Matthias Alfeld from the University of Antwerp (Belgium). "Compared to other techniques, the X-ray investigation we tested is currently the best method to look underneath the original painting."

The scientists used macro X-ray fluorescence analysis (MA-XRF), a relatively new method to examine a painting with two layers that simulates the Rembrandt. Under the energetic X-ray light, different pigments fluoresce in a specific way. This allows researchers to determine the chemical composition of the surface and the layers below. By scanning the whole painting with an X-ray beam, it is possible to see the layer beneath a repainted picture in a way that is non-destructive for the masterpiece.

The Old Man in Military Costume was previously investigated with infrared, neutron and conventional X-ray methods – without a satisfactory result. "The problem with Rembrandt is the fact that he mostly used the same paint with the same chemical composition for the underlying and the final painting," explained DESY scientist and co-author Karen Appel who also participated in the study of hidden Vincent van Gogh paintings. "Van Gogh used different pigments; this makes it easier for the investigators to distinguish the hidden and the repainted picture."

The team tested different X-ray fluorescence analysis methods, one by using a mobile X-ray scanner, and others at DORIS and NSLS. Their aim was to avoid the difficult transportation of the original painting from the Los Angeles Paul Getty Museum for test measurements, so museum graduate intern Andrea Sartorius created a detailed mock-up. For this she used paint with the same chemical composition as used by Rembrandt van Rijn and painted two pictures on the same canvas: a portrait and on top of it a replica of the Old Man in Military Costume. "It is the first time that a painting was reproduced in such an elaborate way for these tests," Alfeld pointed out.

The mock-up is not only useful to determine the most promising method for studying the Old Man in Military Costume, but also helps researchers explore the chance of success of an analysis method at Rembrandt's early paintings. "We created a model which allows testing and comparing all kinds of techniques," emphasises Joris Dik, professor at Delft University of Technology and one of the co-authors of the paper. "This is extremely valuable for museums. Thanks to the mock-up it is possible to go through the whole procedure: from packing, transportation up to the investigation and its success chances."

With the use of X-ray radiation, the scientists excited elements to fluoresce, including calcium, iron, mercury and lead. The study shows that macro X-ray fluorescence analysis (MA-XRF) in all four areas already delivered considerably better impressions of the hidden painting than all methods used before. The mercurial vermilion and lead white pigments in the area of the face give an especially good impression of the concealed portrait. The best results were obtained at the large synchrotron radiation sources DORIS and NSLS. Nevertheless, the mobile technology made significant progress; therefore, this kind of investigation that avoids transportation is worth considering, Alfeld explained. "We are confident that this way it will be possible to unlock the mysteries of hidden Rembrandt paintings to a greater extent as before," said Koen Janssens, professor at the University of Antwerp and expert for X-ray based analysis methods.

Karen Trentelman, Head of the Collections Research Laboratory of the Getty Conservation Institute in Los Angeles, remarks: "The successful completion of these preliminary investigations on the mock-up painting was an important first step. The results of these studies will enable us determine the best possible approach to employ in our planned upcoming study of the real Rembrandt painting".

Deutsches Elektronen-Synchrotron is the leading German accelerator centre and one of the leading in the world. The DESY institutes in Hamburg and Zeuthen near Berlin develop, build and operate large particle accelerators to investigate the structure of matter. DESY conducts research in the fields of photon science and particle physics - this combination is unique in Europe.