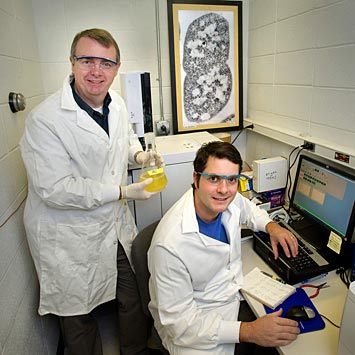 UPTON, NY—Scientists studying an enzyme that naturally produces alkanes—long carbon-chain molecules that could be a direct replacement for the hydrocarbons in gasoline—have figured out why the natural reaction typically stops after three to five cycles. Armed with that knowledge, they’ve devised a strategy to keep the reaction going. The biochemical details—worked out at the U.S. Department of Energy’s Brookhaven National Laboratory and described in the Proceedings of the National Academy of Sciences the week of February 4, 2013—renew interest in using the enzyme in bacteria, algae, or plants to produce biofuels that need no further processing.

“Alkanes are very similar to the carbon-chain molecules in gasoline. They represent a potential renewable alternative to replace the petrochemical component of gasoline,” said Brookhaven biochemist John Shanklin, who led the research, which was conducted in large part by former Brookhaven postdoc Carl Andre, now working at BASF Plant Science in North Carolina, and Xiaohong Yu of Brookhaven’s Biosciences Department. “Unlike the process of breaking down plant biomass to sugars and fermenting them to ethanol,” Shanklin said, “biologically produced alkanes could be extracted and used directly as fuel.”

Likewise, the Brookhaven team’s experiments in test tubes—using substrates synthesized with the help of Sunny Kim in Brookhaven’s Radiotracer and Biological Imaging group—yielded the same result others had observed: The enzyme mysteriously stopped working after three to five “turnovers” and alkane production would cease.

Biochemical curiosity and ADO’s remarkable resemblance to a group of enzymes the Brookhaven scientists were familiar with drew them deeper into the mystery of why the enzyme stopped working.

“We set to work to try to understand the biochemistry of ADO because it is so similar to the desaturase enzymes that we study, but performs a very different and interesting reaction,” Shanklin said.

The key discovery—that the alkane-producing system creates a by-product that’s toxic to the ADO enzyme—was unexpected. It was also the key to solving the turnover problem.

To simplify the analysis of ADO, the scientists tested whether they could substitute hydrogen peroxide for the electron transfer proteins and oxygen normally required for the alkane-producing reaction—an approach that had worked for a related enzyme. But instead of stimulating alkane production, no alkane at all was produced, and in control experiments containing all the components plus hydrogen peroxide, alkane production was also blocked.

“It turns out one of the electron transport proteins was interacting with oxygen to produce hydrogen peroxide, and the buildup of hydrogen peroxide was ‘poisoning’ the ADO enzyme, completely inhibiting its activity,” Shanklin said.

To confirm that hydrogen peroxide buildup was the problem and to simultaneously test whether its depletion might enhance alkane production, Shanklin and his team tried adding another enzyme, catalase, which metabolizes hydrogen peroxide to oxygen and water.

“When we added both enzymes, instead of the reaction turning over three times before stopping, it ran for more than 225 cycles,” Shanklin said.

So the scientists decided to make a “bi-functional” enzyme by linking the two together.

“We reasoned that with the ADO and catalase enzymes linked, as the hydrogen peroxide concentration near the enzyme increases, the catalase could convert it to oxygen, mitigating the inhibition and thereby keeping the reaction going,” he said.

Living cells often contain levels of hydrogen peroxide sufficient to cause ADO inhibition.  So there was a question about whether the dual enzyme would increase alkane production under these natural conditions.

Results to date have been encouraging: In experiments in test tubes and pilot studies in bacteria, the bi-functional enzyme resulted in at least a five-fold increase in alkane production compared with ADO alone. And, in addition to removing hydrogen peroxide as an inhibitor of ADO, the combo enzyme actually helps drive the alkane-producing reaction by producing oxygen, one of the key components required for activity.

Now the scientists are working to install the combo enzyme in algae or green plants.

“While ADO-containing bacteria convert sugar that we feed to them into alkanes, it would be much more efficient to produce alkanes in photosynthetic organisms using carbon dioxide and sunlight,” Shanklin said.

The scientists also suggest that the general approach of strategically designing fusion enzymes to break down small molecule inhibitors could be used to improve the efficiency of a wide range of reactions. Defeating natural inhibition, a process they describe as “protection via inhibitor metabolism” (PIM), would allow such bifunctional enzymes to function more efficiently than their natural counterparts.

The research was funded by the DOE Office of Science.