The following news release on new results from the Daya Bay neutrino experiment is being issued jointly by the U.S. Department of Energy's Brookhaven National Laboratory and Lawrence Berkeley National Laboratory. Brookhaven Lab will host a seminar titled "New Results of Electron Antineutrino Disappearance From the Daya Bay Experiment" on Friday, August 23, 2013, at 11 a.m. Eastern Time in the Large Seminar Room of the Physics Department, where Brookhaven physicist Jiajie Ling will present and discuss these results. This talk is open to the public, but attendees age 16 and over must bring photo ID. Reporters interested in attending are asked to contact Karen McNulty Walsh or Peter Genzer in the Brookhaven Lab Media & Communications Office (see contact info above). 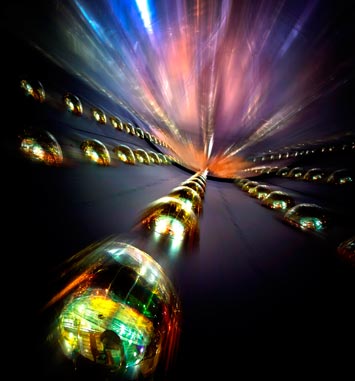 The Daya Bay Neutrino Experiment is designed to provide new understanding of neutrino oscillations that can help answer some of the most mysterious questions about the universe. Shown here are the photomultiplier tubes in the Daya Bay detectors. (Photo by Roy Kaltschmidt, Berkeley Lab)

The international Daya Bay Collaboration has announced new results about the transformations of neutrinos - elusive, ghostlike particles that carry invaluable clues about the makeup of the early universe.  The latest findings include the collaboration's first data on how neutrino oscillation – in which neutrinos mix and change into other "flavors," or types, as they travel – varies with neutrino energy, allowing the measurement of a key difference in neutrino masses known as "mass splitting."

"Understanding the subtle details of neutrino oscillations and other properties of these shape-shifting particles may help resolve some of the deepest mysteries of our universe," said Jim Siegrist, Associate Director of Science for High Energy Physics at the U.S. Department of Energy (DOE), the primary funder of U.S. participation in Daya Bay.

U.S. scientists have played essential roles in planning and running of the Daya Bay experiment, which is aimed at filling in the details of neutrino oscillations and mass hierarchy that will give scientists new ways to test for violations of fundamental symmetries. For example, if scientists detect differences in the way neutrinos and antineutrinos oscillate that are beyond expectations, it would be a sign of charge-parity (CP) violation, one of the necessary conditions that resulted in the predominance of matter over antimatter in the early universe.  The new results from the Daya Bay experiment about mass-splitting represent an important step towards understanding how neutrinos relate to the structure of our universe today.

More on neutrinos at Brookhaven Lab

Brookhaven National Laboratory plays multiple roles in the Daya Bay project, ranging from management to data analysis. In addition to coordinating detector engineering efforts and developing software and analysis techniques, Brookhaven scientists perfected the "recipe" for a special, very chemically stable liquid that fills part of Daya Bay's detectors and interacts with antineutrinos. This work builds upon a legacy of breakthrough neutrino research by Brookhaven Lab that has resulted in two Nobel Prizes in Physics. For more information, see the following links:

"Mass splitting represents the frequency of neutrino oscillation," says Kam-Biu Luk of the U.S. Department of Energy's Lawrence Berkeley National Laboratory (Berkeley Lab), the Daya Bay Collaboration's Co-spokesperson, who identified the ideal site for the experiment. "Mixing angles, another measure of oscillation, represent the amplitude. Both are crucial for understanding the nature of neutrinos." Luk is a senior scientist in Berkeley Lab's Physics Division and a professor of physics at the University of California (UC)  Berkeley.

The Daya Bay Collaboration, which includes more than 200 scientists from six regions and countries, is led in the U.S. by DOE's  Berkeley Lab and Brookhaven National Laboratory (BNL). The Daya Bay Experiment is located close to the Daya Bay and Ling Ao nuclear power plants in China, 55 kilometers northeast of Hong Kong.  The latest results from the Daya Bay Collaboration will be announced at the XVth International Workshop on Neutrino Factories, Super Beams and Beta Beams in Beijing, China.

"These new precision measurements are a great indication that our efforts will pay off with a deeper understanding of the structure of matter and the evolution of the universe – including why we have a universe made of matter at all," says Steve Kettell, a Senior Scientist at BNL and U.S. Daya Bay Chief Scientist.

U.S. contributions to the Daya Bay experiment include coordinating detector engineering; perfecting the recipe for the liquid used to track neutrinos in the Daya Bay detectors; overseeing the photo-detector systems used to observe neutrino interactions and muons; building the liquid-holding acrylic vessels and the detector-filling and automated calibration systems; constructing the muon veto system; developing essential software and data analysis techniques; and managing the overall project. 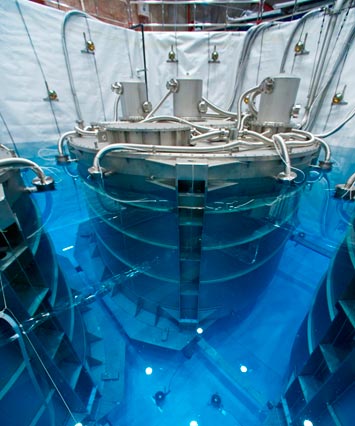 Neutrinos come in three "flavors" (electron, muon, and tau) and each of these exists as a mixture of three masses. Measuring oscillations of neutrinos from one flavor to another gives scientists information on the probability of each flavor occupying each mass state (the mixing angles) and the differences between these masses (mass splitting).

Daya Bay measures neutrino oscillation with electron neutrinos – actually antineutrinos, essentially the same as neutrinos for the purpose of these kinds of measurements. Millions of quadrillions of them are created every second by six powerful reactors. As they travel up to two kilometers to underground detectors, some seem to disappear.

The missing neutrinos don't vanish; instead they have transformed, changing flavors and becoming invisible to the detectors. The rate at which they transform is the basis for measuring the mixing angle, and the mass splitting is determined by studying how the rate of transformation depends on the neutrino energy.

"These new precision measurements are a great indication that our efforts will pay off with a deeper understanding of the structure of matter and the evolution of the universe – including why we have a universe made of matter at all."

Daya Bay's first results were announced in March 2012 and established the unexpectedly large value of the mixing angle theta one-three, the last of three long-sought neutrino mixing angles. The new results from Daya Bay put the precise number for that mixing angle at sin22θ13=0.090 plus or minus 0.009. The improvement in precision is a result of having more data to analyze and having the additional measurements of how the oscillation process varies with neutrino energy.

The energy-dependence measurements also open a window to the new analysis that will help scientists tease out the miniscule differences among the three masses. From the KamLAND experiment in Japan, they already know that the difference, or "split," between two of the three mass states is small. They believe, based on the MINOS experiment at Fermilab, that the third state is at least five times smaller or five times larger.  Daya Bay scientists have now measured the magnitude of that mass splitting,  |Δm2ee|, to be (2.59±0.20)x10-3 eV2.

The result establishes that the electron neutrino has all three mass states and is consistent with that from muon neutrinos measured by MINOS. Precision measurement of the energy dependence should further the goal of establishing a "hierarchy," or ranking, of the three mass states for each neutrino flavor.

MINOS, and the Super-K and T2K experiments in Japan, have previously determined the complementary effective mass splitting (Δm2μμ) using muon neutrinos. Precise measurement of these two effective mass splittings would allow calculations of the two mass-squared differences (Δm232 and Δm231) among the three mass states. KamLAND and solar neutrino experiments have previously measured the mass-squared difference Δm221 by observing the disappearance of electron antineutrinos from reactors about 100 miles from the detector and the disappearance of neutrinos from the sun.

UC Berkeley and Berkeley Lab's Bill Edwards, Daya Bay's U.S. Project and Operations Manager, says, "The ability to measure these subtle effects with greater and greater precision is a testament to the scientific and engineering team that designed and built this exceptional experiment."

U.S. scientists are also laying the groundwork for a future neutrino project, the Long-Baseline Neutrino Experiment (LBNE). This experiment would use high intensity accelerators at Fermi National Accelerator Laboratory to produce high-energy muon neutrinos and aim them at detectors 1,300 kilometers away in South Dakota, a distance from neutrino source to detector needed to observe the transformations of high-energy muon neutrinos. LBNE would detect the appearance of the other two flavors at the far-away detector in addition to the disappearance of one flavor of neutrino as evidence of oscillation.  The combined results from LBNE and other global neutrino experiments will give scientists new ways to test for violations of fundamental symmetries, and open other avenues to understanding the structure of the universe today.

DOE's Office of Science is the single largest supporter of basic research in the physical sciences in the United States, and is working to address some of the most pressing challenges of our time. For more information, please visit the Office of Science website at science.energy.gov/.