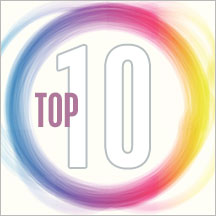 2013 was a banner year for science at the U.S. Department of Energy's Brookhaven National Laboratory—from our contributions to Nobel Prize-winning research to new insights into catalysts, superconductors, and other materials key to advancing energy-efficient technologies. Our Top-10 picks for the year are below; follow us on Facebook, Twitter, and Tumblr to be in on the breakthroughs of the future as they occur. 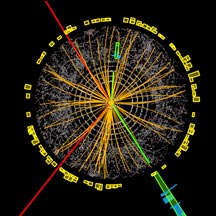 Tracks of a Higgs event captured by the Large Hadron Collider's ATLAS detector.

Phone calls from the Royal Swedish Academy of Sciences to theoretical physicists François Englert and Peter Higgs announcing that they'd won the Nobel Prize in Physics last October sparked celebrations among physicists around the world. The two were key players in the development of a theory predicting the existence of a subatomic "Higgs" particle and the mechanism by which it gives mass to the building blocks of our universe. But it took thousands of physicists—including more than 100 at Brookhaven Lab—to design, build, and run the experiments that discovered the Higgs particle in collisions of protons at Europe's Large Hadron Collider last year. "It's wonderful to see a 50-year-old theory confirmed after decades of hard work and remarkable ingenuity," said Brookhaven Lab Director Doon Gibbs. U.S. contributions of scientific and technical expertise, along with essential computing and data analysis capabilities, were all necessary "to bring the Higgs out of hiding," he said. "It's a privilege to share in the success of an experiment that has changed the face of science." 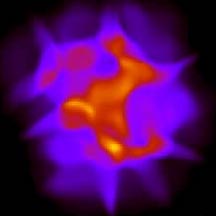 The pattern of particles emerging from a collision at RHIC retains details of the initial conditions at low viscosity.

The hot soup of early-universe matter created in heavy ion collisions at the Relativistic Heavy Ion Collider (RHIC)—the only operating particle collider in the U.S.—is about as close to "perfect" as possible. That's the result of a new analysis of patterns of particles emerging from the collisions and how those patterns retain echoes of the initial collision geometry. The more the patterns reflect the initial conditions, the lower the "effective shear viscosity," or resistance to flow, needed to describe the data. According to these calculations, RHIC's viscosity turns out to be close to the ideal hydrodynamic limit—even lower than that achieved at the Large Hadron Collider, where heavy ions are collided at higher energies for experiments that are complementary with those at RHIC. The findings are helping scientists understand how viscosity varies with temperature and also explore the internal characteristics of the ions before they collide. 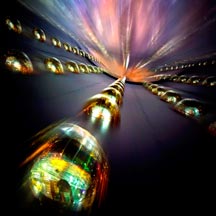 The photomultiplier tubes in the Daya Bay detectors

Scientists conducting research at the Daya Bay Neutrino Experiment in China, including physicists from Brookhaven Lab who play key roles in this research, announced new results about the transformations of these elusive, ghostlike particles that carry invaluable clues about the makeup of the early universe. The latest findings include the collaboration's first data on how neutrino oscillation—in which neutrinos mix and change into other "flavors," or types, as they travel—varies with neutrino energy, allowing the measurement of a key difference in neutrino masses known as "mass splitting." Understanding the subtle details of neutrino oscillations and other properties of these shape-shifting particles may help resolve some of the deepest mysteries of our universe. "These new precision measurements are a great indication that our efforts will pay off with a deeper understanding of the structure of matter and the evolution of the universe—including why we have a universe made of matter at all," said Brookhaven's Steve Kettell, U.S. Daya Bay Chief Scientist.

Insights into superconductors and transistors 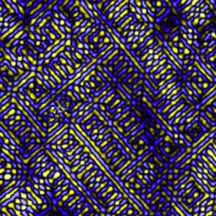 "Nanostripes" of alternating electrons and "holes" in a copper-oxide superconductor.

Years of experiments on various types of high-temperature superconductors—materials that offer hope for energy-saving applications such as zero-loss electrical power lines—have turned up an amazing array of complex behaviors among electrons that, in some instances, pair up to carry current with no resistance, and in others, stop the flow of current in its tracks. A new theory developed in part at Brookhaven may explain how these sometimes competing, "intertwined" behaviors—and superconductivity itself—emerge based on a single very simple principle. The theory governs all the known high-temperature superconductors and could be a big step toward identifying or developing superconductors that can be used even more effectively than those known today—potentially transforming our energy landscape. 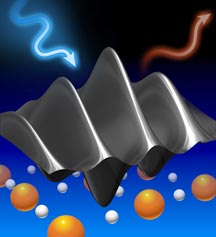 In this rendering, never-before-seen magnetic excitations ripple through a high-temperature superconductor.

High-temperature superconductors could revolutionize the planet's aging and imperfect energy infrastructure. But to unlock the true potential of these materials, scientists must understand the strange magnetic metal from which superconductivity emerges in order to pin down the source of the current-carrying phenomenon. In one such exploration, scientists at Brookhaven Lab and other collaborating institutions have discovered a surprising twist—unexpected magnetic excitations that exist in both non-superconducting and superconducting materials. The scientists say this is a major experimental clue, made possible by cutting-edge x-ray scattering techniques, about which magnetic excitations are important for high-temperature superconductivity. Exploration of this phenomenon will continue as these capabilities are incorporated into the new National Synchrotron Light Source II, now nearing completion at Brookhaven.

Field-effect Transistors Get a Boost From Ferroelectric Films 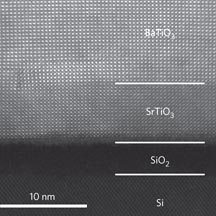 These ferroelectric films are grown on a base of silicon.

As microelectronics get smaller and smaller, one of the biggest challenges to packing a smartphone or tablet with maximum processing power and memory is the amount of heat generated by the tiny "switches" at the heart of the device. A complex metal oxide film—designed by IBM and University of Texas, Austin researchers, and tested at IBM, the National Synchrotron Light Source (NSLS) at Brookhaven Lab, and Oak Ridge National Laboratory—could help reduce the voltage required to switch electronic signals, and thus the excessive energy they require. "These ferroelectric films can switch, and once they're switched they are stable at room temperature; moreover you can make these things in nanoscale size on a silicon substrate, and there are a lot of ways you can incorporate them into microelectronics devices," said Jordan-Sweet, an IBM researcher at NSLS. 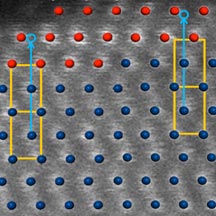 Brookhaven Lab scientists have created a high-performing nanocatalyst with the perfect blend of reactivity, durability, and scalability for harnessing energy from hydrogen. The novel core-shell structure—ruthenium coated with a thin layer of platinum—resists damage from carbon monoxide as it drives the energetic reactions central to electric vehicle fuel cells and similar technologies. A key to the advance was close interaction between synthesis and advanced characterization using the facilities of Brookhaven's National Synchrotron Light Source and the Center for Functional Nanomaterials, which could show the crystal perfection of the core, shell and interface. The scientists' "green" synthesis method allowed them to overcome structural defects that previously crippled carbon monoxide-tolerant catalysts. "Our highly scalable synthesis method opens new and exciting possibilities for catalysis and sustainability," said Brookhaven Lab chemist Jia Wang. 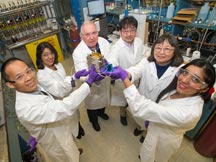 Another group of Brookhaven chemists has developed a way to produce hydrogen for various energy applications using a low-cost, stable, effective catalyst inspired by nature—one that could sidestep the need for any expensive platinum. The catalyst, made from renewable soybeans and abundant molybdenum metal compound, produces hydrogen in an environmentally friendly, cost-effective manner. The research was conducted in part by twin-sister high school students as part of an internship at Brookhaven. Working with the Brookhaven chemists, they sought out natural materials (e.g., biomass) for preparing an electrocatalyst to produce pure hydrogen, which can be used as fuel, from water. The results have been promising. The students (now in college) and scientists are conducting additional studies to gain a deeper understanding of the nature of the catalyst and exploring ways to further improve its performance.

High-speed video of water droplets bouncing off a surface textured with nanocones.

When it comes to designing extremely water-repellent surfaces, shape and size matter. That's the finding of a group of Brookhaven Lab scientists who investigated the effects of differently shaped, nanoscale textures on a material's ability to force water droplets to roll off. The research was aimed at improving on engineers' attempts to mimic the self-cleaning tendency of plants such as lotus leaves, to produce materials that would perform well even under conditions involving high temperature, pressure, and humidity—such as would be experienced on automotive and aircraft windshields and steam turbine power generators. By fabricating and testing materials with different nanoscale textures, the scientists discovered that water droplets rolled off surfaces with cone-shaped nanostructures significantly better than ones with cylindrical pillars. Further, by virtue of their reduced size, these structures were able to completely repel water droplets impacting the surface with force (as captured using a high-speed camera). The team is working to extend their method of nanotexture fabrication to other materials, including glass and plastics, as well as designing oil-repellent surfaces by further tweaking the surface texture shape. 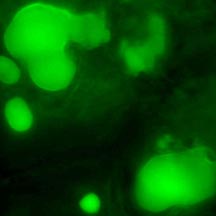 Overexpressing the gene for PDAT, an enzyme involved in oil production, caused plant leaves to accumulate large amounts of oil in large globules.

Brookhaven scientists identified the key genes required for oil production and accumulation in plant leaves and other vegetative plant tissues, as opposed to seeds, where plants normally store oils to nourish developing embryos. Enhancing expression of these genes resulted in vastly increased oil content in leaves, the most abundant sources of plant biomass—a finding that could have important implications for increasing the energy content of plant-based foods and renewable biofuel feedstocks. These studies were done in laboratory plants, so the scientists still need to see if this strategy will work in bioenergy or feed crops. And there are challenges in finding ways to extract oil from leaves so it can be converted to biofuels. But the research provides a very promising path to improving the use of plants as a source of higher-energy-content feed and feedstocks for producing renewable energy.

Brookhaven's role in this research is funded primarily by the DOE Office of Science.