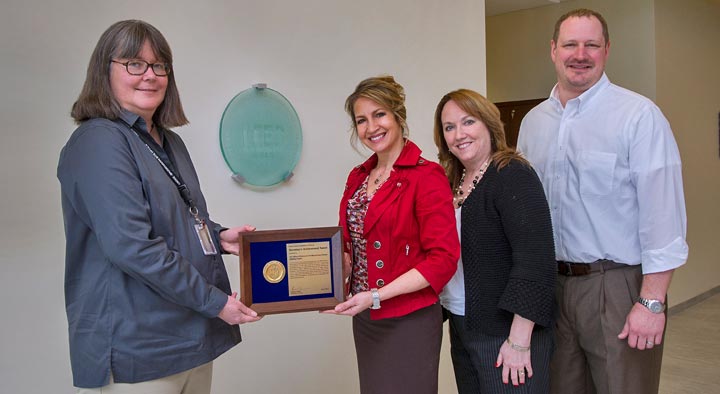 UPTON, NY — A laboratory construction project completed at the U.S. Department of Energy's (DOE) Brookhaven National Laboratory—the Interdisciplinary Science Building (ISB) for energy research—has been named a winner of the DOE Secretary's Achievement Award. The award was given by DOE in recognition of outstanding project management and comprehensive planning to successfully deliver a modern research facility intended to advance breakthroughs in energy research and development. The Lab's project team leaders received the award on March 26 at the 2014 Annual DOE Project Management Workshop in Arlington, VA.

"The Interdisciplinary Science Building was designed and constructed to enable scientists at Brookhaven Lab to attain goals and get scientific results they couldn't achieve here before," said ISB Project Manager Peggy Caradonna of the Lab's Modernization Project Office. "With unwavering commitment and seamless coordination, the ISB project team effectively managed challenges to produce innovative solutions. The team and I were honored to work on this project, complete it successfully—four months ahead of schedule and under budget—and now, to receive the Secretary's Achievement Award." 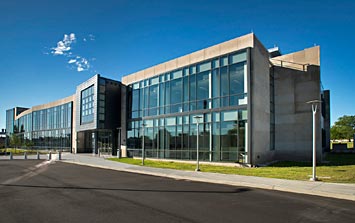 The ISB is an 87,700-square-foot facility at Brookhaven Lab that opened in April 2013. It contains four specialized laboratories with unique features including a "dry room" for safely assembling and testing new lithium-ion batteries, and two ultra-low vibration laboratories to assist researchers exploring materials' electronic structure at the atomic scale, and fabricating new materials one atomic layer at a time. The building also contains offices and 60 standard laboratories. Some researchers from different scientific disciplines have begun using the facility's labs and others are setting up extremely sensitive equipment for experiments as they strive to tackle the nation's energy challenges.

In addition, the ISB contains conference spaces and areas designed to foster collaboration among scientists. To help advance developments and collaborations, the ISB is also located within walking distance of several other major Lab research facilities, including the Center for Functional Nanomaterials, the National Synchrotron Light Source (NSLS), and NSLS-II, which is scheduled to begin operations in 2015.

In December 2013, the ISB was awarded LEED Gold certification for its energy-efficient and environmentally sustainable design, construction, and operations.

Brookhaven Lab's Modernization Project Office managed the ISB design and oversaw its construction. The facility was designed by HDR Architecture, Inc. and general contractor E.W. Howell, Inc. built the structure. The total cost for the project was $66.8 million, most of which was provided by the DOE Office of Science. The Lab received approximately $18 million from the American Recovery and Reinvestment Act to accelerate ISB construction in April 2009.