Possible pathway to adjustable filters, surfaces with variable mechanical response, or even new ways to deliver genes for biomedical applications 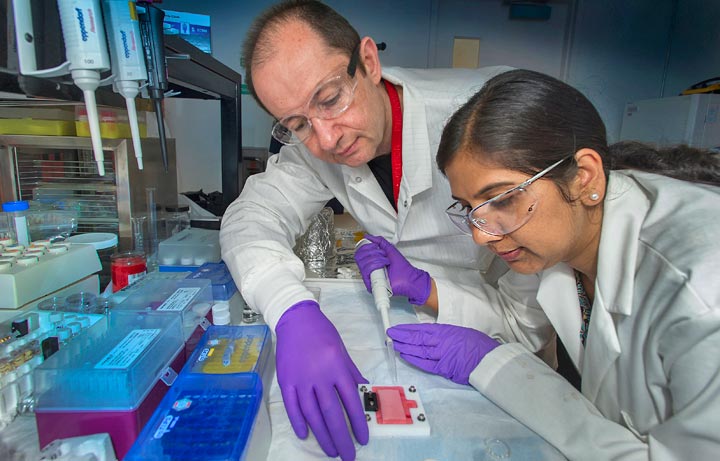 UPTON, NY—Scientists seeking ways to engineer the assembly of tiny particles measuring just billionths of a meter have achieved a new first—the formation of a single layer of nanoparticles on a liquid surface where the properties of the layer can be easily switched. Understanding the assembly of such nanostructured thin films could lead to the design of new kinds of filters or membranes with a variable mechanical response for a wide range of applications. In addition, because the scientists used tiny synthetic strands of DNA to hold the nanoparticles together, the study also offers insight into the mechanism of interactions of nanoparticles and DNA molecules near a lipid membrane. This understanding could inform the emerging use of nanoparticles as vehicles for delivering genes across cellular membranes.

"Many of the applications we envision for nano particles … require planar geometry. Using DNA linker molecules gives us a way to control the interactions between the nanoparticles."

"Our work reveals how DNA-coated nanoparticles interact and re-organize at a lipid interface, and how that process affects the properties of a "thin film" made of DNA-linked nanoparticles," said physicist Oleg Gang who led the study at the Center for Functional Nanomaterials (CFN) at the U.S. Department of Energy's Brookhaven National Laboratory. The results will be published in the June 11, 2014 print edition of the Journal of the American Chemical Society.

Like the molecule that carries genetic information in living things, the synthetic DNA strands used as "glue" to bind nanoparticles in this study have a natural tendency to pair up when the bases that make up the rungs of the twisted-ladder shaped molecule match up in a particular way. Scientists at Brookhaven have made great use of the specificity of this attractive force to get nanoparticles coated with single synthetic DNA strands to pair up and assemble in a variety of three-dimensional architectures. The goal of the present study was to see if the same approach could be used to achieve designs of two-dimensional, one-particle-thick films.

"Many of the applications we envision for nanoparticles, such as optical coatings and photovoltaic and magnetic storage devices, require planar geometry," said Sunita Srivastava, a Stony Brook University postdoctoral researcher and the lead author on the paper. Other groups of scientists have assembled such planes of nanoparticles, essentially floating them on a liquid surface, but these single-layer arrays have all been static, she explained. "Using DNA linker molecules gives us a way to control the interactions between the nanoparticles."

As described in the paper, the scientists demonstrated their ability to achieve differently structured monolayers, from a viscous fluid-like array to a more tightly woven cross-linked elastic mesh—and switch between those different states—by varying the strength of the pairing between complementary DNA strands and adjusting other variables, including the electrostatic charge on the liquid assembly surface and the concentration of salt. 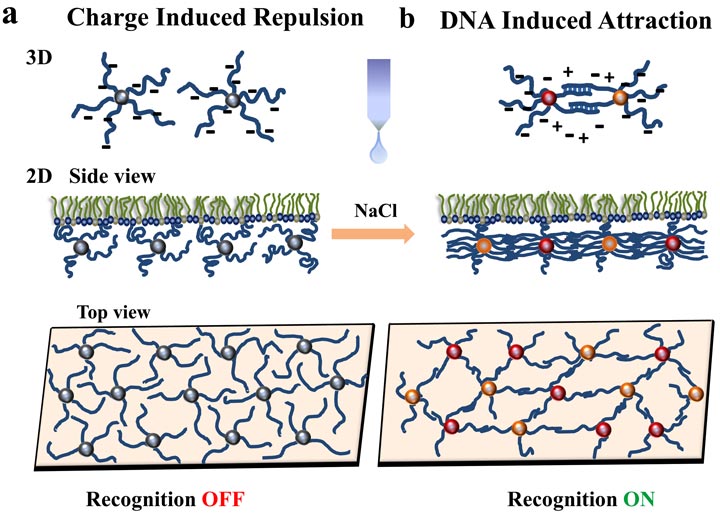 When the surface they used, a lipid, has a strong positive charge it attracts the negatively charged DNA strands that coat the nanoparticles. That electrostatic attraction and the repulsion between the negatively charged DNA molecules surrounding adjacent nanoparticles overpower the attractive force between complementary DNA bases. As a result, the particles form a rather loosely arrayed free-floating viscous monolayer. Adding salt changes the interactions and overcomes the repulsion between like-charged DNA strands, allowing the base pairs to match up and link the nanoparticles together more closely, first forming string-like arrays, and with more salt, a more solid yet elastic mesh-like layer.

"The mechanism of this phase transition is not obvious," said Gang. "It cannot be understood from the repulsion-attraction interactions alone. With the help of theory, we reveal that there are collective effects of the flexible DNA chains that drive the system in the particular states. And it is only possible when the particle sizes and the DNA chain sizes are comparable—on the order of 20-50 nanometers," he said.

As part of the study, the scientists examined the different configurations of the nanoparticles on top of the liquid layer using x-ray scattering at Brookhaven's National Synchrotron Light Source (NSLS). They also transferred the monolayer produced at each salt concentration to a solid surface so they could visualize it using electron microscopy at the CFN.

"Creating these particle monolayers at a liquid interface is very convenient and effective because the particles' two-dimensional structure is very 'fluid' and can be easily manipulated—unlike on a solid substrate, where the particles can easily get stuck to the surface," Gang said. "But in some applications, we may need to transfer the assembled layer to such a solid surface. By combining the synchrotron scattering and electron microscopy imaging we could confirm that the transfer can be done with minimal disruption to the monolayer."

The switchable nature of the monolayers might be particularly attractive for applications such as membranes used for purification and separations, or to control the transport of molecular or nano-scale objects through liquid interfaces.  For example, said Gang, when particles are linked but move freely at the interface, they may allow an object—a molecule—to pass through the interface. "However, when we induce linkages between particles to form a mesh-like network, any object larger than the mesh-size of the network cannot penetrate through this very thin film. "

"In principle, we can even think about such on-demand regulated networks to adjust the mesh size dynamically. Because, of the nanoscale size-regime, we might envision using such membranes for filtering proteins or other nanoparticles," he said.

Understanding how synthetic DNA-coated nanoparticles interact with a lipid surface may also offer insight into how such particles coated with actual genes might interact with cell membranes—which are largely composed of lipids—and with one another in a lipid environment.

"Other groups have considered using DNA-coated nanoparticles to detect genes within cells, or even for delivering genes to cells for gene therapy and such approaches," said Gang. "Our study is the first of its kind to look at the structural aspects of DNA-particle/lipid interface directly using x-ray scattering. I believe this approach has significant value as a platform for more detailed investigations of realistic systems important for these new biomedical applications of DNA-nanoparticle pairings," Gang said.

This research was sponsored by the DOE Office of Science.