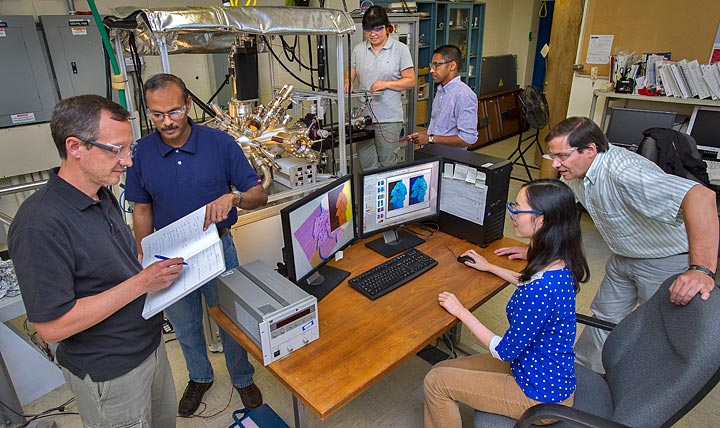 UPTON, NY—Scientists at the U.S. Department of Energy's (DOE) Brookhaven National Laboratory have discovered a new catalytic system for converting carbon dioxide (CO2) to methanol—a key commodity used to create a wide range of industrial chemicals and fuels. With significantly higher activity than other catalysts now in use, the new system could make it easier to get normally unreactive CO2 to participate in these reactions.

"Developing an effective catalyst for synthesizing methanol from CO2 could greatly expand the use of this abundant gas as an economical feedstock."

"Developing an effective catalyst for synthesizing methanol from CO2 could greatly expand the use of this abundant gas as an economical feedstock," said Brookhaven chemist Jose Rodriguez, who led the research. It's even possible to imagine a future in which such catalysts help mitigate the accumulation of this greenhouse gas, by capturing CO2 emitted from methanol-powered combustion engines and fuel cells, and recycling it to synthesize new fuel.

That future, of course, will be determined by a variety of factors, including economics. "Our basic research studies are focused on the science—the discovery of how such catalysts work, and the use of this knowledge to improve their activity and selectivity," Rodriguez emphasized.

The research team, which included scientists from Brookhaven, the University of Seville in Spain, and Central University of Venezuela, describes their results in the August 1, 2014, issue of the journal Science. 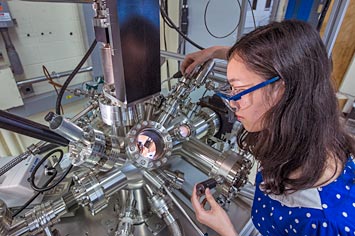 Because CO2 is normally such a reluctant participant in chemical reactions, interacting weakly with most catalysts, it's also rather difficult to study. These studies required the use of newly developed in-situ (or on-site, meaning under reaction conditions) imaging and chemical "fingerprinting" techniques. These techniques allowed the scientists to peer into the dynamic evolution of a variety of catalysts as they operated in real time. The scientists also used computational modeling at the University of Seville and the Barcelona Supercomputing Center to provide a molecular description of the methanol synthesis mechanism.

The team was particularly interested in exploring a catalyst composed of copper and ceria (cerium-oxide) nanoparticles, sometimes also mixed with titania. The scientists' previous studies with such metal-oxide nanoparticle catalysts have demonstrated their exceptional reactivity in a variety of reactions. In those studies, the interfaces of the two types of nanoparticles turned out to be critical to the reactivity of the catalysts, with highly reactive sites forming at regions where the two phases meet.

This movie of scanning tunneling microscopy images shows the copper-oxide component of a catalyst (red) as it is gradually reduced to metallic copper (yellow) in the presence of hydrogen gas to produce the active phase for the transformation of carbon dioxide to methanol.

To explore the reactivity of such dual particle catalytic systems in converting CO2 to methanol, the scientists used spectroscopic techniques to investigate the interaction of CO2 with plain copper, plain cerium-oxide, and cerium-oxide/copper surfaces at a range of reaction temperatures and pressures. Chemical fingerprinting was combined with computational modeling to reveal the most probable progression of intermediates as the reaction from CO2 to methanol proceeded.

These studies revealed that the metal component of the catalysts alone could not carry out all the chemical steps necessary for the production of methanol. The most effective binding and activation of CO2 occurred at the interfaces between metal and oxide nanoparticles in the cerium-oxide/copper catalytic system.

"The key active sites for the chemical transformations involved atoms from the metal [copper] and oxide [ceria or ceria/titania] phases," said Jesus Graciani, a chemist from the University of Seville and first author on the paper. The resulting catalyst converts CO2 to methanol more than a thousand times faster than plain copper particles, and almost 90 times faster than a common copper/zinc-oxide catalyst currently in industrial use. 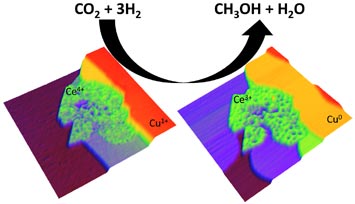 Scanning tunneling microscope image of a cerium-oxide and copper catalyst (CeOx-Cu) used in the transformation of carbon dioxide (CO2) and hydrogen (H2) gases to methanol (CH3OH) and water (H2O). In the presence of hydrogen, the Ce4+ and Cu+1 are reduced to Ce3+ and Cu0 with a change in the structure of the catalyst surface.

This study illustrates the substantial benefits that can be obtained by properly tuning the properties of a metal-oxide interface in catalysts for methanol synthesis.

"It is a very interesting step, and appears to create a new strategy for the design of highly active catalysts for the synthesis of alcohols and related molecules," said Brookhaven Lab Chemistry Department Chair Alex Harris.

The work at Brookhaven Lab was supported by the DOE Office of Science. The studies performed at the University of Seville were funded by the Ministerio de Economía y Competitividad of Spain and the European Regional Development Fund. The Instituto de Tecnologia Venezolana para el Petroleo supported part of the work carried out at the Central University of Venezuela.