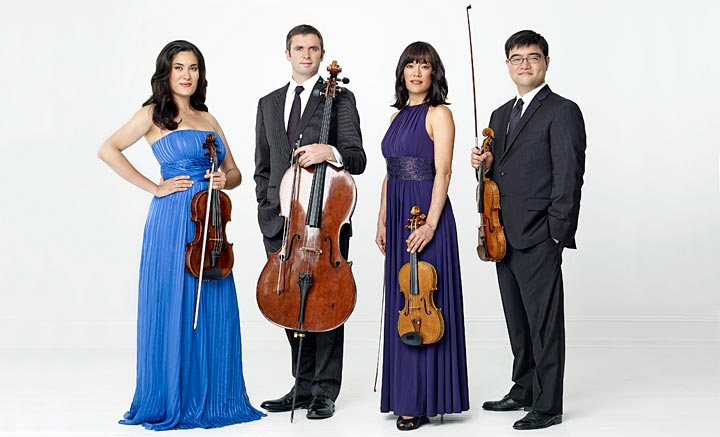 UPTON, NY — The Ensō Quartet will give a recital at the U.S. Department of Energy's Brookhaven National Laboratory on Wednesday, September 30, at noon in Berkner Hall. Sponsored by Brookhaven Science Associates, the company that manages the Lab, the concert is free and open to the public. All visitors to the Laboratory 16 and older must bring a photo I.D.

Founded at Yale University in 1999, the Ensō Quartet has won numerous awards, including top prizes at the Concert Artists Guild competition and the Banff International String Quartet competition. In addition to a busy touring and teaching schedule, the New York-based quartet has made a number of recordings for the Naxos label. The fall of 2014 marked the release of the Quartet's fifth recording for Naxos – featuring the quartets of Puccini, Verdi and Strauss. The group tours extensively in the United States with concerts at Bargemusic in New York, Johns Hopkins in Baltimore, and the Philadelphia Chamber Music Society. Recent highlights include debuts at the Kennedy Center and in Seattle at Town Hall, and returns to Interlochen and Rice University's Shepherd School of Music in Houston. World premieres include commissioned works by the esteemed New Zealand composer Dame GillianWhitehead and American composer Kurt Stallmann. The Quartet also gave the world premiere of Joan Tower's Piano Quintet, with the composer at the keyboard. In the summer 2013, the group made debut appearances in both Brazil and Mexico, at Festival Interncional de Inverno de Campos do Jordão and Festival Internacional de Musica de Camera San Miguel de Allende.

The Quartet's members were drawn to the string quartet repertoire because of its richness and diversity, and the ensemble is committed to exploring the four corners of that repertoire. The Quartet regularly performs the classics of the string quartet literature, but also champions lesser-known works that deserve to be heard, along with much contemporary music. The ensemble also performs many of its own transcriptions, including arrangements of 16th century Renaissance music. In addition to their performances at concert halls around the world, members of the Quartet are also instructors giving master classes for the next generation of professional musicians, working with enthusiastic amateurs, young and old, and with autistic individuals in conjunction with a United Kingdom-based organization, Music for Autism. They have been recognized for their work with schoolchildren in Bridgeport, Connecticut.

For the program at Brookhaven, the Quartet will perform works by Jean Sibelius and Esa-Pekka Salonen.