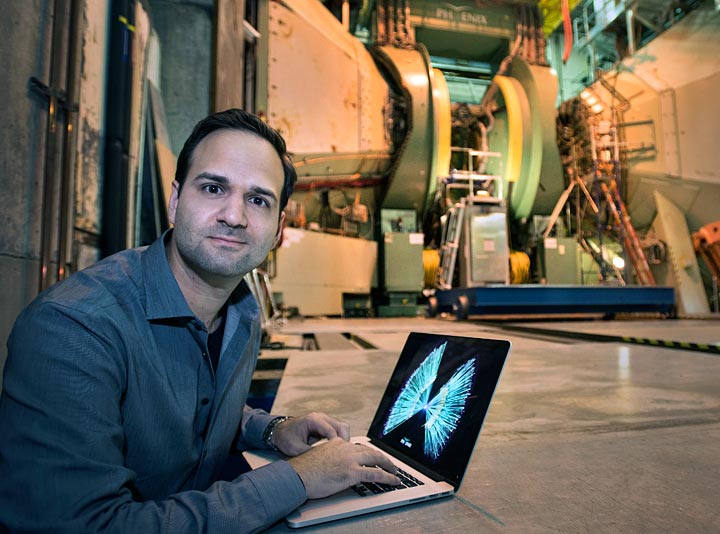 "It is an honor to be recognized, and to know that the discoveries we are making at RHIC and at the LHC are interesting to the larger scientific community," said Perepelitsa.

Founded by business entrepreneur Len Blavatnik, in partnership with the New York Academy of Sciences, the Blavatnik Awards for Young Scientists seek to promote early-career researchers engaged in innovative, high-impact research. Each year the regional awards recognize one winner and two finalists in each of the categories of Life Science, Physical Sciences & Engineering, and Chemistry.  Perepelitsa will accept the award, consisting of $10,000 in unrestricted funds and a medal, at the New York Academy of Sciences Annual Gala on Monday, November 9, 2015.

Perepelitsa conducts his research using both the PHENIX experiment at RHIC and the ATLAS experiment at the LHC. He studies the jets of particles that are emitted when two atomic nuclei smash together at high speeds. His double-award winning Ph.D. work suggested that asymmetric collisions—collisions between a smaller particle, like a proton or a deuteron, and a much larger particle, like a gold or lead nucleus—can be used in a novel way to explore unexpected properties of the smaller particle, such as the fluctuations in its size and internal structure. These results provided yet more evidence that these asymmetric collisions are even more interesting than expected.

Perepelitsa is now shifting his focus to the next era of nucleus-nucleus collision experiments—an area that has long been a major focus of research at RHIC. He believes these heavy ion collisions still have much to reveal about the nature and properties of the hot nuclear medium created at RHIC.

"I think relativistic heavy ion physics is starting to move from a discovery science to a precision measurement science," he said. "Ten years ago we might have asked, 'Have we conclusively demonstrated that these collisions create this flowing nuclear fireball that we call the quark-gluon plasma?' Now, the questions are much more specific: 'Do we quantitatively understand what this plasma is composed of and how it works across different length scales, different temperatures, and in different collision geometries?'"

Moving forward, he is excited to analyze the upcoming higher-energy nuclear collision data at the LHC and to develop the capabilities of a proposed transformation of the PHENIX detector into sPHENIX.

"For young scientists who come into the field and find detectors at RHIC and the LHC already built and in place, sPHENIX is a really rare opportunity to get in on the ground floor of a new experiment and participate in the decision making process very early on," he said.

To Perepelitsa, the Blavatnik award is affirmation that his work is appreciated outside of the world of nuclear and particle physics. "What is challenging but rewarding about this process is just how broad and accessible you need to make your research," he said. "You have to convince not just experts, but other scientists and even the scientifically interested lay audience that this work is important."

Perepelitsa is also looking forward to sharing more details of his research at the 508th Brookhaven Lecture, which will take place at 4 p.m. next Wednesday, October 21st in Berkner Hall at Brookhaven Lab. The lecture is open to the public.

Perepelitsa joined the Physics Department at Brookhaven Lab in 2013 as a Goldhaber Postdoctoral Fellow—a prestigious fellowship awarded to candidates with exceptional talent and credentials who have a strong desire for independent research at the frontiers of their fields. Goldhaber Fellows are funded by Brookhaven Science Associates, the company that manages Brookhaven Lab for the U.S. Department of Energy. Before arriving at Brookhaven, Perepelitsa earned bachelor's degrees in physics and mathematics with computer science at Massachusetts Institute of Technology in 2008. At Columbia University, he earned a master's degree in 2010 and a Ph.D. in 2014, both in physics. Perepelitsa is the first scientist to earn outstanding Ph.D. thesis awards from the research communities at both the Relativistic Heavy Ion Collider at Brookhaven Lab and the Large Hadron Collider at CERN.

Brookhaven's nuclear physics research at RHIC and the Large Hadron Collider are funded primarily by the DOE Office of Science (NP).