The following news release was issued by CERN, the European Organization for Nuclear Research, home to the Large Hadron Collider. Scientists from the U.S. Department of Energy's Brookhaven National Laboratory play multiple roles in the research at the LHC. For more on Brookhaven's role in the current research and future upgrades, see this recent feature article: Upgrades to ATLAS and LHC Magnets for Run 2 and Beyond https://www.bnl.gov/newsroom/news.php?a=25764 and the links that follow the CERN news release text. For more information about Brookhaven's role or to speak with a Brookhaven/LHC scientist, contact Karen McNulty Walsh, (631) 344-8350, kmcnulty@bnl.gov. 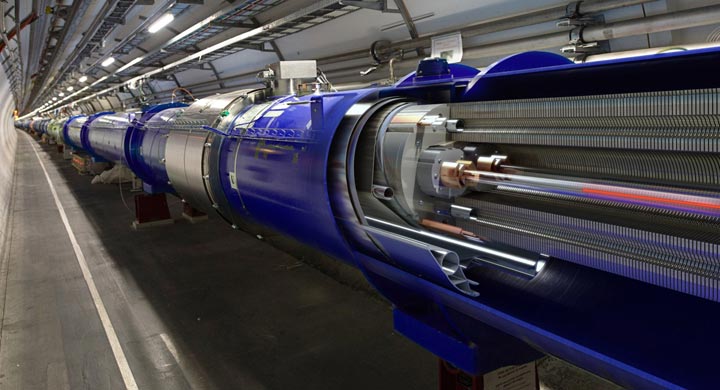 Geneva, 29 October 2015—This week more than 230 scientists and engineers from around the world met at CERN* to discuss the High-Luminosity LHC – a major upgrade to the Large Hadron Collider (LHC) that will increase the accelerator's discovery potential from 2025.

After a four year long design study the project is now moving into its second phase, which will see the development of industrial prototypes for various parts of the accelerator.

"The High-Luminosity LHC expects to produce 10 times more collisions over 10 years than the current LHC will in its first decade."

Luminosity is a crucial indicator of performance for an accelerator. It is proportional to the number of particles colliding within a defined amount of time. Since discoveries in particle physics rely on statistics, the greater the number of collisions, the more chances physicists have to see a particle or process that they have not seen before.

The High-Luminosity LHC will provide more accurate measurements of fundamental particles and enable physicists to observe rare processes that occur below the current sensitivity level of the LHC. With this upgrade, the LHC will continue to push the limits of human knowledge, enabling physicists to explore beyond the Standard Model and Brout-Englert-Higgs mechanism.

SIDEBAR from Symmetry Next up: A turbocharged LHC

Even though the Large Hadron Collider is at the peak of its performance, currently smashing protons at a record-breaking energy, physicists are already planning for its next iteration, which will make its debut in 2025.

Today, scientists and engineers from more than a dozen institutions around the world met in Geneva to discuss the beginning of construction for the High-Luminosity LHC.

"About halfway through the construction of the LHC, scientists in the United States started developing new magnet and accelerator technologies for the HL-LHC," says Peter Wanderer, head of the Superconducting Magnet Division at Brookhaven National Laboratory. "This meeting gives us the chance to integrate our work and progress with the efforts at CERN and other organizations involved in the luminosity upgrade." More

"The LHC already delivers proton collisions at the highest energy," says Director General of CERN, Rolf Heuer. "The High-Luminosity LHC expects to produce 10 times more collisions over 10 years than the current LHC will in its first decade, and will therefore increase our potential to make discoveries."

The increase in luminosity will mean physicists will be able to study new phenomena discovered by the LHC, such as the Higgs boson, in more detail. The High-Luminosity LHC will produce 15 million Higgs bosons per year compared to the 1.2 million in total created at the LHC between 2011 and 2012.

Upgrading the LHC will be a challenging procedure and relies on several breakthrough technologies currently under development.

"We have to innovate in many fields, developing cutting-edge technologies for magnets, the optics of the accelerator, superconducting radiofrequency cavities, and superconducting links," explains Lucio Rossi, Head of the High-Luminosity LHC project.

Some 1.2 km of the LHC will be replaced by these new technologies, which include cutting-edge 12 Tesla superconducting quadrupole magnets built using a superconducting compound of niobium and tin. These will strongly focus the beam to increase the probability of collisions occurring and will be installed at each side of the ATLAS and CMS experiments.

There are also brand new superconducting radiofrequency cavities, called "crab cavities", which will be used to orientate the beam before the collision to increase the length of the area where the beams overlap. New electrical transfer lines, based on high temperature superconductors, will be able to carry currents of record intensities to the accelerator, up to 100,000 amps, over 100 metres.

"The High-Luminosity LHC will use pioneering technologies - such as high field niobium-tin magnets - for the first time," says Frédérick Bordry, CERN Director for Accelerators and Technology. "This will not only increase the discovery potential of the LHC but also serve as a proof of concept for future accelerators."

All these technologies have been explored since 2011 in the framework of the HiLumi LHC Design Study - partly financed by the European Commission's FP7 programme. HiLumi LHC brought together a large number of laboratories from CERN's member states, as well as from Russia, Japan and the US. American institutes participated in the project with the support of the US LHC Accelerator Research Program (LARP). Some 200 scientists from 20 countries collaborated on this first successful phase.

The meeting this week marks the end of this hugely complex and collaborative design phase of the High-Luminosity LHC project. The project will now focus on the prototyping and industrialization of the technologies before the construction phase can begin.

*CERN, the European Organization for Nuclear Research, is the world's leading particle physics research laboratory. Its headquarters are in Geneva. Its Member States are currently: Austria, Belgium, Bulgaria, the Czech Republic, Denmark, Finland, France, Germany, Greece, Hungary, Israel, Italy, the Netherlands, Norway, Poland, Portugal, the Slovak Republic, Spain, Sweden, Switzerland and the United Kingdom. Romania is a Candidate for Accession and Serbia is an Associate Member State in the Pre-stage to Membership. Pakistan and Turkey are Associate Members. The United States of America, the Russian Federation, India, Japan, the Joint Institute for Nuclear Research (JINR), UNESCO and the European Union have Observer status.

Brookhaven National Laboratory's research at the LHC is supported by the U.S. Department of Energy's Office of Science.