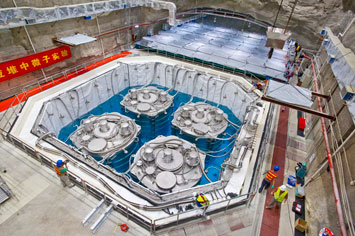 UPTON, NY—Five experiments conducting research on the subtle transformations of ghostlike subatomic neutrinos have been awarded the 2016 "Breakthrough Prize" in fundamental physics. The prize, founded in 2012 by a group of Silicon Valley innovators, recognizes profound contributions to human knowledge while working on the deepest mysteries of the universe. Additional prizes were awarded in life sciences and mathematics.

The $3 million award will be shared equally among researchers from Daya Bay, KamLAND, K2K/T2K, Sudbury Neutrino Observatory (SNO), and Super-Kamiokande (Super-K). Researchers from the U.S. Department of Energy's (DOE) Brookhaven National Laboratory have made important contributions to the work at several of these experiments, including T2K, SNO and Super-K (the latter two having been honored with this year's Nobel Prize in physics), and have a large and ongoing involvement in the Daya Bay Collaboration.

"This is a wonderful honor for all neutrino researchers."

Daya Bay's founding co-spokespersons—Kam-Biu Luk of the U.S. Department of Energy's (DOE) Lawrence Berkeley National Laboratory and Yifang Wang of China's Institute of High Energy Physics (IHEP) in Bejing—and this year's Nobel laureates—Takaaki Kajita (Super-K) and Arthur B. McDonald (SNO)—were among those in attendance at the Breakthrough Prize award ceremony, broadcast live on the National Geographic Channel last night, to accept the prize on behalf of their collaborations.

"This is a wonderful honor for all neutrino researchers," said Brookhaven Lab Director Doon Gibbs. "With this year's Nobel Prize in physics also being awarded for neutrino research, perhaps 2015 should be renamed the year of the neutrino!"

Brookhaven and the Daya Bay Experiment

Neutrinos are elusive particles that flooded the universe in the earliest moments after the Big Bang. Today they are continually produced in the hearts of stars and other nuclear reactions, vastly outnumbering all other particles of matter. Untouched by electromagnetism, they respond only to the weak nuclear force and even weaker gravity, passing mostly unhindered through everything from planets to people. 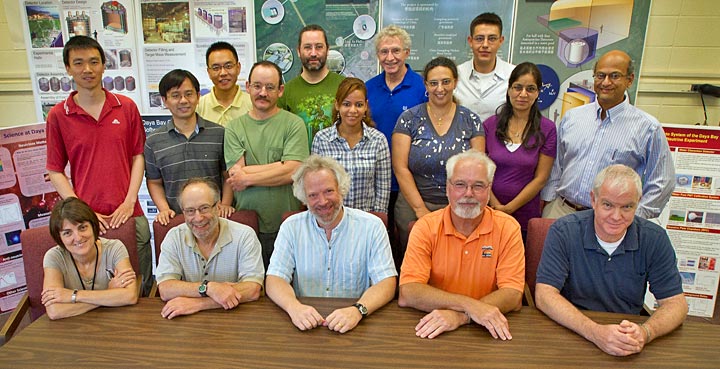 The challenge of capturing these elusive particles inspired the Daya Bay Collaboration to design and precisely place its detectors at varying distances from the powerful nuclear reactors of the China Guangdong Nuclear Power Group. These reactors, at Daya Bay and nearby Ling Ao, produce 3500 billion billion elusive electron antineutrinos every second.

Brookhaven scientists led the collaboration's detector engineering and design efforts, and developed software and analysis techniques for measuring neutrino oscillations. They perfected the "recipe" for a very special, chemically stable liquid that fills Daya Bay's detectors and interacts with the antineutrinos.

In 2012, the Daya Bay Collaboration published its first results, announcing the discovery of a new kind of neutrino oscillation with a measurement of how often electron antineutrinos mix and change into other neutrinos. Oscillations are the ways that neutrinos switch their identities among three known "flavors"—electron, muon, and tau—a complex behavior that may ultimately offer insight into why there is far more ordinary matter than antimatter in the universe today.

In September 2015, the collaboration published their highest-precision results to date, including measurement of the oscillation frequency. Oscillation frequency, in turn, offers insight into the different masses neutrinos can have—a significant detail considering that neutrinos were once thought to be massless. These results are critical to scientists' understanding of neutrino oscillations and whether their current model of three-neutrino oscillations is correct. The work has also opened the door to using neutrinos to explore potential differences between matter and antimatter that might explain why the universe—created with equal parts matter and antimatter—is filled mostly with matter today.

"Beginning with the hypothesized existence of the neutrino nearly one hundred years ago, the exploration of the properties of neutrinos has been accomplished with a series of impressive breakthroughs in experimental technique," said Brookhaven physicist and Daya Bay collaborator David Jaffe. "For Daya Bay to be recognized for our successful measurement of a new kind of neutrino oscillation is an inspiration and an honor."

The Breakthrough Prizes were founded by Silicon Valley innovators Sergey Brin (Google) and Anne Wojcicki (23andMe), Jack Ma (Alibaba) and Cathy Zhang, Yuri Milner (DST Global) and Julia Milner, and Mark Zuckerberg (Facebook) and Priscilla Chan. For the past three years, the Breakthrough Prize has been honoring those at the forefront of the fundamental physics, life sciences and mathematics fields, while also aiming to inspire innovators in these fields for the future.

This year's Prizes were announced at a Silicon Valley ceremony hosted by Emmy-nominated "Cosmos" executive producer and "Family Guy" creator Seth MacFarlane, broadcast live on the National Geographic Channel and FOX network on Sunday, November 8, at 10 p.m. U.S. Eastern Time. A one-hour version of the ceremony is scheduled to air on FOX on Sunday, November 29, 7-8 p.m. Eastern Time. The one-hour version will also air globally on the National Geographic Channel in 171 countries and 45 languages.

Brookhaven's participation in the Daya Bay Collaboration is funded by the DOE Office of Science (HEP, NP).