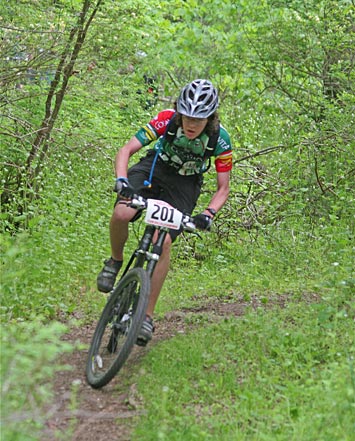 Bikes have a harder time turning around than pedestrians, especially on a narrow path. Scientists say the same principle — binding the direction of motion to angular momentum — can keep electrons moving powerfully enough to overcome material imperfections, or bumps in the road. "XCBikeRacer" by Daniel Plunkett. Licensed under CC BY-SA 3.0 via Commons.

UPTON, NY—In certain nanomaterials, electrons are able to race through custom-built roadways just one atom wide. To achieve excellent efficiency, these one-dimensional paths must be paved with absolute perfection—a single errant atom can stop racing electrons in their tracks or even launch it backwards. Unfortunately, such imperfections are inevitable.

Now, a pair of scientists from the U.S. Department of Energy's Brookhaven National Laboratory and Ludwig Maximilian University in Munich has proposed the first solution to such subatomic stoppage: a novel way to create a more robust electron wave by binding together the electron's direction of movement and its spin. The trick, as described in a paper published November 16 in Physical Review Letters and featured as an Editor's Selection, is to exploit magnetic ions lacing the electron racetrack. The theory could drive advances in nanoscale engineering for data- and energy-storage technologies.

"One-dimensional materials can only be very good conductors if they are defect-free, but nothing in this world is perfect," said Brookhaven physicist Alexei Tsvelik, one of two authors on the paper. "Our theory, the first of its kind, lays out a way to protect electron waves and optimize these materials."

The work relies on a model system called a Kondo chain, where flowing electrons interact with local magnetic moments within a material. Properly harnessed, this powerful interaction could allow materials to behave like perfect conductors and offer high efficiency.

"This bound spin-direction state is like our electron's bicycle, keeping it rolling along powerfully enough to overcome bumps in the one-dimensional road."

Atom-wide channels only allow motion in one of two opposing directions: right or left. Electrons traveling through such a narrow path—racing along in what are called charge-density waves—can be easily reversed by virtually any obstacle.

"The wave rises like an electronic tsunami that is expected to carry electrons smoothly in one direction," Tsvelik said. "But it turns out that this tsunami can be very easily pinned by disorder, by impurities in the material."

This "tsunami" shifts direction through a conductivity-smothering phenomenon called backscattering—like a wave breaking against sheer cliffs. But while direction is easily reversed, another feature of the electron is much more resilient: spin. The spin of an electron—like a perpetually spinning quantum top—can only be described as either up or down, and it is impervious to simple imperfections in the material. The trick, then, is to teach the directional wave to lean on spin for support.

"As the electrons flow, they interact with magnetic moments embedded in the material—these pockets of intrinsic magnetism are the key to producing the bound state," said Ludwig Maximilian University physicist Oleg Yevtushenko, the other collaborator on the paper. "The magnetic moments bind spin and direction tightly together, so any disturbance would need to flip the electron's spin in order to change its direction."

Imagine walking along a narrow path barely wide enough for both feet. In such a simple system, turning around is easy—one can pivot around at the slightest provocation.

"But what if we give our pedestrian a bicycle?" Tsvelik said. "It suddenly becomes very difficult to break that angular momentum and change directions—especially on such a narrow path. This bound spin-direction state is like our electron's bicycle, keeping it rolling along powerfully enough to overcome bumps in the one-dimensional road."

To verify the efficacy of this theoretical electron bicycle, scientists will need to apply this theory to stringent tests.

"The magnetic ions in materials such as cesium, iron, and manganese all make excellent candidates for generating and exploring this promising bound state," Yevtushenko said.

"We hope our colleagues will leap at this challenge, especially as it's the only method proposed to enhance flow at this 1D scale," Tsvelik said. "Who knows where these fundamental concepts might lead? The wonder of science is that it brings surprise."