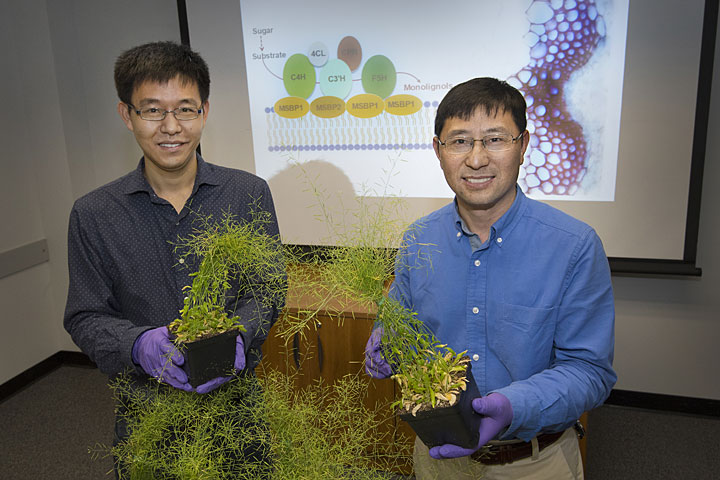 Mingyue Gou and CJ Liu with Arabidopsis plants used in this research, standing in front of a schematic illustration of the enzyme "machinery" that makes building blocks for lignin, a plant cell wall component.

UPTON, NY—Plants are among the most effective energy convertors on Earth. They capture solar energy and convert it to carbon-based compounds that are used for energy and also to build up essential plant components, including the cell walls that surround every single plant cell. In a new biochemical genetics study at the U.S. Department of Energy’s (DOE) Brookhaven National Laboratory, scientists reveal new details of the molecular machinery that helps channel carbon into a key cell-wall component.

Learning how plant cells control the construction of their exterior supports could help scientists devise new ways to either promote the storage of carbon in these structures or facilitate the conversion of carbon-based biomass into biofuels and other useful products.

The study, published in Nature Plants, reports how two proteins embedded on membranes within plant cells serve as a scaffold to organize three key enzymes that specifically channel carbon into the synthesis of a cell-wall polymer called lignin.

Lignin is essential to plants’ ability to grow upright and represents a substantial carbon-storage component of plants. But because it surrounds the other cell-wall components—cellulose and hemicellulose—lignin protects these carbon-rich substances from the biochemical processes commonly used to convert them to fuels or other bio-products. Understanding the details of lignin synthesis, in particular, might offer clues about how to conquer this challenge.

The three enzymes establish the structural characteristics of biochemical building blocks known as monolignols, which link up to form lignin. Scientists previously thought that these enzymes were associated with one another and served as the anchor sites for organizing monolignol synthesis.

“We started this project to study the interactions of these three enzymes in detail,” said Brookhaven biochemist and project leader Chang-Jun Liu. “We discovered that even though the three enzymes are located near one another on a membrane known as the endoplasmic reticulum, they don’t interact directly. Instead, two separate proteins interact with all three enzymes.”

The separate proteins are “membrane steroid binding proteins” (MSBPs) embedded in the endoplasmic reticulum—a cell’s interior “highway” of membranes lined with the molecular machines that make proteins and transport those products within or out of cells.

“These membrane-bound proteins serve as a scaffold to organize and stabilize the three enzymes into a type of molecular machinery that controls the metabolic pathway channeling carbon specifically into building lignin precursors,” Liu said.

Having the enzymes involved in sequential steps of a metabolic pathway organized spatially close to each other can improve the efficiency of that pathway, Liu noted. But the details of how the monolignol biosynthesis enzymes are organized were elusive prior to this study.

Details of the study

“We started by looking for evidence of direct interactions among monolignol biosynthesis enzymes,” Liu said. They used biochemical techniques in yeast cell cultures, which are often used as a model system for studying protein-protein interactions. But upon finding no interactions—which was a surprise—they repeated the studies in plant cell cultures.

In these studies, the scientists used fluorescent-labeling and imaging techniques to locate the proteins within plant cells. This time their findings confirmed that all three enzymes were located near one another along the endoplasmic reticulum, implying an interaction.

“The contradiction of the results between these two assays indicated to us that the interactions of the three enzymes observed via fluorescence imaging might have been indirect—and suggested that additional proteins or factors might mediate the association among the enzymes in vivo,” Liu said.

To test that hypothesis, the scientists made three enzymes to fuse with specific tags and produced them in plant cells. Then, they pulled those enzymes out from the cells and examined all the proteins that came out together with three enzymes. Those studies, using liquid chromatography-coupled mass spectrometry, identified two membrane steroid binding proteins that accompanied the three enzymes. The scientists also showed that the membrane steroid binding proteins can associate with themselves or each other to form protein clusters.

“Those observations strongly suggested that the MSBPs organize the monolignol biosynthesis enzymes into a multimeric protein complex or enzymatic cluster,” Liu said.

“With that type of organization, the three enzymes could be located close to one another without necessarily having direct interactions,” he added. Such an arrangement would help drive lignin synthesis by keeping the enzymes and their common cofactor near one another at high enough concentrations to effectively transfer the carbon substrates and electrons needed for efficient chemical reactions to take place.

To test the role of the MSBPs, the scientists created plant lines in which the genes for these proteins were suppressed. While those plants could still make the three monolignol synthesis enzymes, they ended up with significantly less lignin.

In addition, such suppression did not affect the formation of another closely related class of chemicals whose synthesis requires one of the three monolignol synthesis enzymes.