Study Shows Trees with Altered Lignin are Better for Biofuels 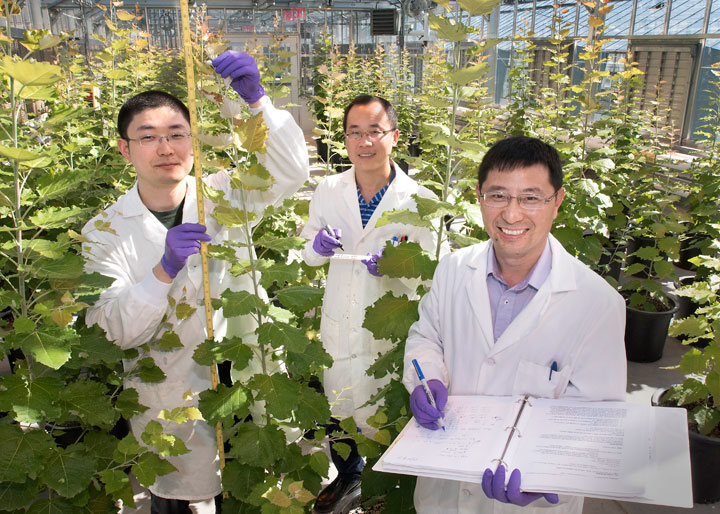 UPTON, NY—Lignin is a natural component of plant cell walls, the scaffolding that surrounds each cell and plays a pivotal role in plants' ability to grow against gravity and reach heights ranging from stubbly grasses to the sky-scraping splendor of redwoods. But lignin is a problem for scientists interested in converting plant biomass to biofuels and other sustainable bio-based products. Lignin makes it hard to break down the plant matter so its carbon-rich building blocks can be converted into forms suitable for generating energy or running automobiles.

A simple solution might be to engineer plants with less lignin. But previous attempts to do this have often resulted in weaker plants and stunted growth—essentially putting the brakes on biomass production.

Our study provides a useful strategy for tailoring woody biomass for bio-based applications.

Now, by engineering a novel enzyme involved in lignin synthesis, scientists at the U.S. Department of Energy's Brookhaven National Laboratory and collaborators have altered the lignin in aspen trees in a way that increases access to biofuel building blocks without inhibiting plant growth. Their research, described in Nature Communications, resulted in an almost 50 percent increase in ethanol yield from healthy aspen trees whose woody biomass released 62 percent more simple sugars than native plants.

Lignin makes up about 20 percent of aspen's woody structures, with cellulose and hemicellulose polymers making up approximately 45 and 25 percent, along with other minor components.

"The lignin forms a barrier of sorts around the other polymers," Liu explained. "Digestive enzymes can't get through to break down the cellulose and hemicellulose to release their simple sugars."

Prior work, including Liu's own research manipulating enzymes involved in lignin synthesis, has shown that reducing or altering plants' lignin content can make woody biomass more digestible. But many of these approaches, particularly those that dramatically reduced lignin content, resulted in weaker plants and severe reductions in biomass yield, rendering these plants unsuitable for large-scale cultivation.

In this study the scientists explored a creative new strategy for modifying lignin's structure based on detailed analysis of enzyme structures that were previously solved by Liu's group using x-rays at the National Synchrotron Light Source (NSLS)—a DOE Office of Science User Facility at Brookhaven Lab, now replaced by a much brighter NSLS-II. That work, described in papers published in Plant Cell (2012) and the Journal of Biological Chemistry (2010 and 2015), was part of an effort to understand the enzymes' mechanism of selectivity. In those studies, the scientists also sought to engineer a series of variations of the enzyme, called monolignol 4-O-methyltransferase, some of which effectively modified the structure of lignin building blocks so they would no longer be incorporated into the lignin polymer. 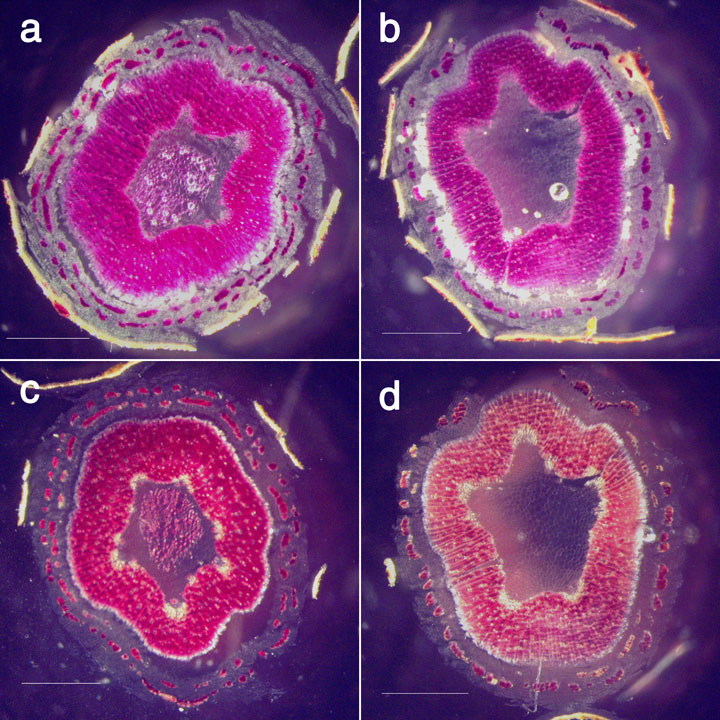 Cross-sections of wild type (a,c) and transgenic (b,d) aspen stems stained with lignin detection agents. The violet red color in the upper images indicates no dramatic change in total lignin content between the wild type (a) and transgenic (b) plants. The red color staining specific for one particular lignin structural unit shown in the lower images, however, indicates a significantly lower level of this component in the transgenic aspen (d) compared with the wild type (c). These findings suggest that lignin in the transgenic aspen has significantly altered composition and structure.

In the new work, the scientists used biochemical analyses to identify a variant of monolignol 4-O-methyltransferase that had a slight chemical "preference" for reacting with one specific type of lignin precursor. The scientists reasoned that this variant had the potential to depress the formation of a particular lignin component.

To test this idea, they transplanted the gene for this variant into a strain of fast-growing aspen trees—a model for other trees in the poplar family, which have widespread potential for bioenergy production because of their ability to grow in many regions and on non-agricultural land. The scientists grew the altered aspen trees alongside untreated control trees in a greenhouse on Brookhaven's property.

The trees that produced the engineered enzyme had slightly less total lignin in their cell walls. But on further analysis, the scientists found that these trees also had dramatically altered lignin structure, with a significant reduction in the level of one of the two major types of lignin components normally found in aspen trees. These findings were further confirmed using two-dimensional nuclear magnetic resonance spectroscopic imaging by a team led by John Ralph of the University of Wisconsin and the Great Lakes Bioenergy Research Center, a DOE Bioenergy Research Center. Specifically, the engineered trees had less "labile" lignin, while the remaining lignin components became structurally more condensed, forming an increased number of cross-linkages among the polymers.

"We expected that this condensed, more cross-linked lignin might make the plants even harder to digest, but found that wood containing these structures released up to 62 percent more simple sugars when treated with digestive enzymes," Liu said. The yield of ethanol from this modified wood was almost 50 percent higher than the ethanol yield of wood derived from untreated control trees.

Microscopic images of wood tissues from wild type (a) and transgenic (b) aspen trees show similar anatomical and structural features, suggesting that the transgenic plant maintains normal growth and wood formation even with altered lignin composition.

Interestingly, by imaging aspen wood samples using infrared light at NSLS, the scientists found that their approach for altering lignin content and composition also increased the production of cellulose fibers, the major source of fermentable sugars in the cell wall. This increased cellulose content might partially contribute to the increased release of simple sugars, they said.

Importantly, the changes in lignin and cell wall structures did not affect the growth of the engineered aspens. The wood densities and the biomass yields were comparable to those of the control trees.

"These data suggest that lignin condensation itself is not a critical factor affecting the digestibility of the cell wall," said Liu. "The findings also support the idea that engineering the enzymes that modify lignin precursors represents a useful biotechnological solution for effectively tailoring the digestibility of poplar-family woody biomass to generate feedstocks for biofuel production.

"It's gratifying when fundamental studies of enzyme function, such as the findings that underpin this work, can be translated to contribute to solving real-world problems," he added.