The technology, developed at Brookhaven Lab's Center for Functional Nanomaterials, was selected from among more than 800 innovative product ideas submitted by scientists, engineers, and entrepreneurs in 60 countries 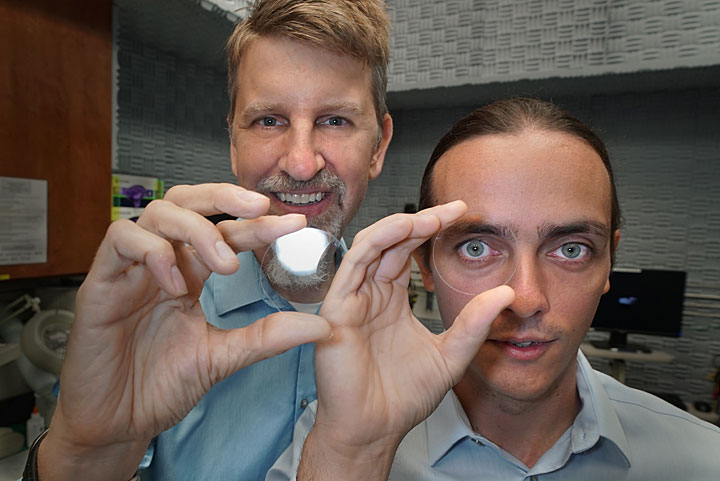 Charles Black (left), director of Brookhaven Lab's Center for Functional Nanomaterials (CFN), and Andreas Liapis (right), a former CFN postdoc and current research fellow at Massachusetts General Hospital's Wellman Center for Photomedicine, are co-developers of invisible glass. The nanotexturing technique that the scientists developed to eliminate optical reflections from glass surfaces was selected as the Grand Prize winner of Tech Briefs' 2018 Create the Future Design Contest. Here, Black holds a piece of regular glass and Liapis a piece of invisible glass for comparison.

UPTON, NY—Scientists from the Center for Functional Nanomaterials (CFN)—a U.S. Department of Energy (DOE) Office of Science User Facility located at Brookhaven National Laboratory—have been awarded the 2018 Create the Future Design Contest $20,000 grand prize for their entry, “Invisible Glass.” The nanotexturing method that the scientists developed to render glass surfaces invisible, or void of optical reflections, was chosen from among more than 800 submissions from innovators in 60 countries. Each entry proposed a product design idea that could improve our world.

The winning technology has the potential to impact several areas, including electronics, energy, medicine, and aerospace. For example, glass covers put on most of today’s electronics to protect against dust, moisture, and contaminants are prone to glare. Replacing these covers with invisible glass could improve users’ experience using smartphones, computers, and other electronic displays. Such antireflective glass could also enhance the energy-conversion efficiency of solar cells by minimizing the amount of sunlight lost to reflection. Another application area is optics—invisible glass could replace the antireflective coatings that are conventionally put into high-intensity lasers, such as those used to manufacture medical devices and aerospace components. These coatings often get damaged when exposed to powerful laser light.

The researchers’ method leverages the pattern-forming abilities of thin films of block copolymers—an important class of industrial polymers used to manufacture many products, including shoe soles, adhesive tapes, and automotive interiors. The scientists have effectively applied the technique not only to eliminate optical reflections from the surfaces of glass but also from silicon (for solar cells) and several types of plastic, including Teflon.

“The CFN brings together world-class scientists and state-of-the-art facilities to carry out basic research in nanoscience,” said CFN Director Charles Black, who co-developed the technology. “At its core, nanoscience is about the study of materials that have the potential to profoundly improve the quality of human life. We’ve been fascinated by the nanoscience that underlies invisible glass, and we’re excited that a technology based on this research could impact both consumer and industrial applications. We’re so honored to have our work recognized by this year’s Grand Prize. The award validates the potential impact of our approach, and it will be useful in advancing our technique from a research innovation developed at a national lab nanoscience user facility to a commercial process for manufacturing nonreflecting glass, silicon, and plastic surfaces.”

In the case of glass, the block copolymers provide a physical template to plasma etch glass surfaces into an array of nanometer-scale cone-shaped textures with sharp tips. When both slides of a glass window are covered with these nanocones, more than 99.7 percent of incident visible light is transmitted—making the glass essentially invisible. 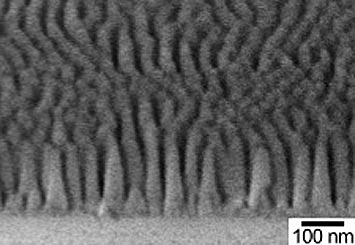 The glass surface seen in the cross-sectional scanning electron microscope image is textured with 170-nanometer-tall cones. The cones are packed very closely together—only 52 nanometers apart. A two-inch piece of glass has 900 billion cones on its surface.

The nanotextures minimize optical reflections by eliminating the abrupt change in refractive index, or how much a ray of light bends as it crosses from one material to another (in this case, from air to glass). Changing the geometry of the surface at the nanoscale results in a more gradual change in its refractive index.

Black and Liapis, along with the other winners, will be recognized for their invention at an awards dinner on Nov. 9 in New York City.

Produced by Tech Briefs Media Group, the annual Create the Future Design Contest was launched in 2002 by the publishers of the magazine NASA Tech Briefs to help stimulate and reward engineering innovation. A global panel of judges representing technology companies and universities reviews the entries, selecting one grand prize winner and first-place winners for each of the seven product categories: aerospace and defense, automotive/transportation, consumer products, electrons/sensors/Internet of Things, machinery/automation/robotics, medical products, and sustainable technologies. The contest’s primary sponsors are COMSOL and Mouser Electronics, with Analog Devices and Intel as supporting sponsors.