To commemorate Women’s History Month, this article is one in a series of profiles to be featured in March on women who are active in Brookhaven Women in Science. 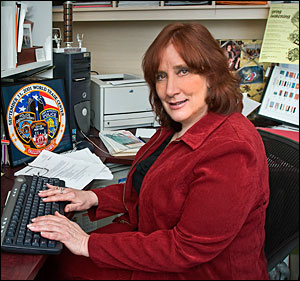 Kathy Walker’s career at BNL began quite by accident. Her car broke down near the Lab, and she got help to fix it from the gas station on site. After seeing the Lab site for the first time, she thought it might be a good place to work.

Almost 30 years later, after meeting the challenges of many varied jobs at the Lab, from patrol officer to security training specialist to her current job – administrator of BNL’s Foreign Visits and Assignments Program – she knows she was right.

After graduating with an associate’s degree in criminal justice from Suffolk County Community College in 1975, Walker joined Fairchild Republic as an administrative assistant to the manager of security and rose to become assistant industrial engineer for the Farmingdale-based company. In 1979, she became an information operator at the New York Telephone Company, and in 1981, she changed careers again, joining Brookhaven’s Police Group as a security police officer. She was promoted to shift lieutenant and security training specialist before taking on her current assignment in 2004.

Walker joined Brookhaven Women in Science (BWIS) in the late 1980s, and in 2006, she became a member of the BWIS Executive Board. She currently serves as BWIS Coordinator with Lynne Ecker.

“I’ve had an interest in women’s issues for a long time,” Walker said. “I feel women need someone to champion them, particularly in careers in which women are a minority. Although women have made advances in their status over the last several decades, we still have a long way to go. Women are still a distinct minority in many areas of science. They need to be encouraged and given opportunities to excel in nontraditional careers.”

As BWIS Coordinator, Walker said she hopes to partner with more groups in organizing BWIS’s events and activities. BWIS is also poised to start a new networking group for both men and women, to meet during the lunch hour.

Walker is proud of BWIS’s accomplishments, including the group’s initiation of the studies that led to the Child Development Center at BNL, the first to be built on a DOE site. As a single mother with two sons, Walker used the facility soon after it first opened.

Walker would like to remind everyone that BWIS both “promotes women and advances science,” and everyone in the BNL community – men and women, scientists and nonscientists – is invited to join.