Brookhaven National Lab has finished constructing the 3.2 gigapixel "digital film" for the world's largest camera for cosmology, physics, and astronomy 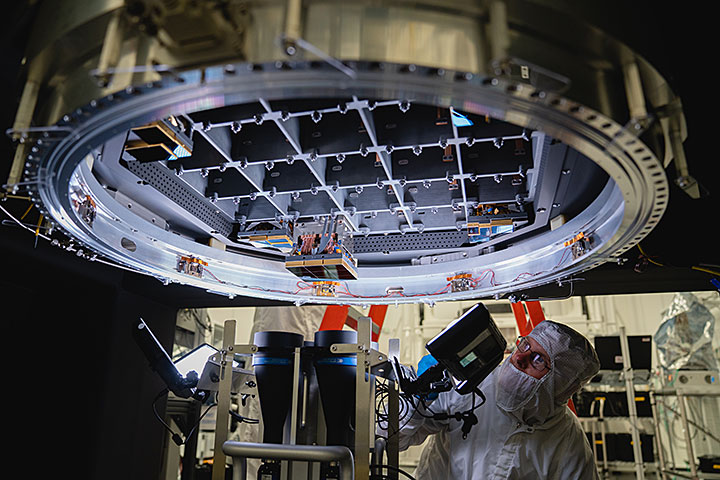 UPTON, NY—After 16 years of dedicated planning and engineering, scientists at the U.S. Department of Energy’s (DOE) Brookhaven National Laboratory have completed a 3.2 gigapixel sensor array for the camera that will be used in the Large Synoptic Survey Telescope (LSST), a massive telescope that will observe the universe like never before.

“This is the biggest charge-coupled device (CCD) array that has ever been built,” said Paul O’Connor, senior scientist at Brookhaven Lab’s instrumentation division. “It’s three billion pixels. No telescope has ever put this many sensors into one camera.”

The digital sensor array is composed of about 200 16-megapixel sensors, divided into 21 modules called “rafts.” Each raft can function on its own, but when combined, they will view an area of sky that can fit more than 40 full moons in a single image. Researchers will stitch these images together to create a time-lapse movie of the complete visible universe accessible from Chile.

Currently under construction on a mountaintop in Chile, LSST is designed to capture the most complete images of our universe that have ever been achieved. The project to build the telescope facility and camera is a collaborative effort among more than 30 institutions from around the world, and it is primarily funded by DOE’s Office of Science and the National Science Foundation. DOE’s SLAC National Accelerator Laboratory is leading the overall effort to construct the camera—the world’s largest camera for astronomy—while Brookhaven led the design, construction, and qualification of the digital sensor array—the “digital film” for the camera.

“It’s the heart of the camera,” said Bill Wahl, science raft subsystem manager of the LSST project at Brookhaven Lab. “What we’ve done here at Brookhaven represents years of great work by many talented scientists, engineers, and technicians. Their work will lead to a collection of images that has never been seen before by anyone. It’s an exciting time for the project and for the Lab.” 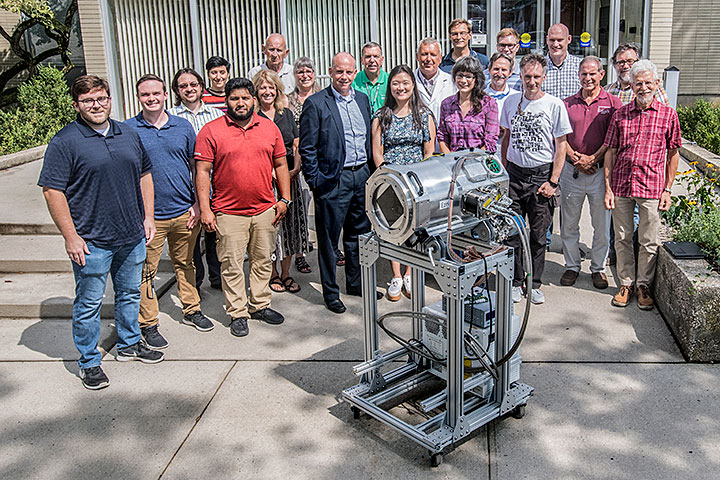 Brookhaven began its LSST research and development program in 2003, with construction of the digital sensor array starting in 2014. In the time leading up to construction, Brookhaven designed and fabricated the assembly and test equipment for the science rafts used both at Brookhaven and SLAC. The Laboratory also created an entire automated production facility and cleanroom, along with production and tracking software.

“We made sure to automate as much of the production facility as possible,” O’Connor said. “Testing a single raft could take up to three days. We were working on a tight schedule, so we had our automated facility running 24/7. Of course, out of a concern for safety, we always had someone monitoring the facility throughout the day and night.”

Constructing the complex sensor array, which operates in a vacuum and must be cooled to -100° Celsius, is a challenge on its own. But the Brookhaven team was also tasked with testing each fully assembled raft, as well as individual sensors and electronics. Once each raft was complete, it needed to be carefully packaged in a protective environment to be safely shipped across the country to SLAC.

The LSST team at Brookhaven completed the first raft in 2017. But soon after, they were presented with a new challenge.

“We later discovered that design features inadvertently led to the possibility that electrical wires in the rafts could get shorted out,” O’Connor said. “The rate at which this effect was impacting the rafts was only on the order of 0.2%, but to avoid any possibility of degradation, we went through the trouble of refitting almost every raft.”

Now, just two years after the start of raft production, the team has successfully built and shipped the final raft to SLAC for integration into the camera. This marks the end of a 16-year project at Brookhaven, which will be followed by many years of astronomical observation.

Many of the talented team members recruited to Brookhaven for the LSST project were young engineers and technicians hired right out of graduate school. Now, they’ve all been assigned to ongoing physics projects at the Lab, such as upgrading the PHENIX detector at the Relativistic Heavy Ion Collider—a DOE Office of Science User Facility for nuclear physics research—to sPHENIX, as well as ongoing work with the ATLAS detector at CERN’s Large Hadron Collider. Brookhaven is the U.S. host laboratory for the ATLAS collaboration

“Brookhaven’s role in the LSST camera project afforded new and exciting opportunities for engineers, technicians, and scientists in electro-optics, where very demanding specifications must be met,” Wahl said. “The multi-disciplined team we assembled did an excellent job achieving design objectives and I am proud of our time together. Watching junior engineers and scientists grow into very capable team members was extremely rewarding.”

Brookhaven Lab will continue to play a strong role in LSST going forward. As the telescope undergoes its commissioning phase, Brookhaven scientists will serve as experts on the digital sensor array in the camera. They will also provide support during LSST’s operations, which are projected to begin in 2022.

“The commissioning of such a complex camera will be an exciting and challenging endeavor,” said Brookhaven physicist Andrei Nomerotski, who is leading Brookhaven’s contributions to the commissioning and operation phases of the LSST project. “After years of using artificial signal sources for the sensor characterization, we are looking forward to seeing real stars and galaxies in the LSST CCDs.”

Once operational in the Andes Mountains, LSST will serve nearly every subset of the astrophysics community. Perhaps most importantly, LSST will enable scientists to investigate dark energy and dark matter—two puzzles that have baffled physicists for decades. It is also estimated that LSST will find millions of asteroids in our solar system, in addition to offering new information about the creation of our galaxy. The images captured by LSST will be made available to physicists and astronomers in the U.S. and Chile immediately, making LSST one of the most advanced and accessible cosmology experiments ever created. Over time, the data will be made available to the public worldwide.