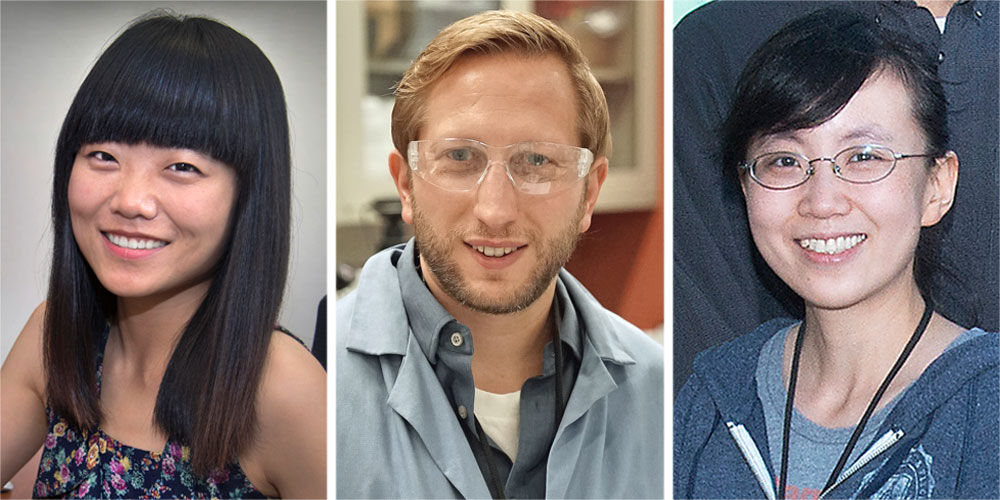 UPTON, NY — Three scientists at the U.S. Department of Energy’s (DOE) Brookhaven National Laboratory have been selected by DOE’s Office of Science to receive significant funding through its Early Career Research Program.

The program, now in its 12th year, supports exceptional scientists during the crucial years when many do their most formative work in the agency’s priority research areas. These awards are part of DOE’s longstanding efforts to support critical research at the nation’s universities and National Labs, grow a skilled STEM workforce, and cement America as a global leader in science and innovation.

“Maintaining our nation’s braintrust of world-class scientists and researchers is one of DOE’s top priorities—and that means we need to give them the resources they need to succeed early on in their careers,” said Secretary of Energy Jennifer M. Granholm. “These awardees show exceptional potential to help us tackle America’s toughest challenges and secure our economic competitiveness for decades to come.”

A total of 83 awardees represent 41 universities and 11 DOE National Laboratories in 32 states—including five universities that are receiving funding for the first time under this award. Researchers based at DOE National Labs will receive grants for $500,000 per year. The research grants are distributed over five years and will cover salary and research expenses.

The Early Career Research Program is funded by DOE’s Office of Science, which has awarded millions in funding over the past month to grow a skilled, diverse STEM workforce—including $11.7 million for undergraduate and community college STEM internships and faculty research opportunities, and $2.4 million for graduate student research opportunities.

A list of all 83 awardees, their institutions, and titles of research projects is available on the Early Career Research Program webpage.

This year’s Brookhaven Lab awardees include: 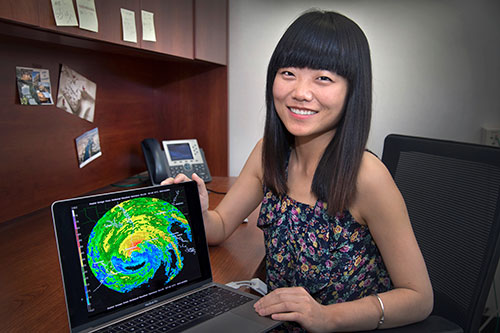 Dié Wang, an assistant atmospheric scientist in Brookhaven Lab’s Environmental and Climate Sciences Department, will receive funding through the DOE’s Office of Science’s Biological and Environmental Research program. Her research project aims to fill knowledge gaps in our understanding of the lifecycle of deep convective clouds (DCCs)–the type of clouds present during thunderstorms–and how aerosols, tiny solid or liquid particles suspended in the atmosphere such as pollutants or sea spray, impact these systems.

Ultimately, the goal is to improve the representation of DCCs in Earth system models and the predictability of the water cycle.

DCCs are an important part of Earth’s water cycle that produce a significant portion of the global precipitation, regulate the global energy cycle, and drive large-scale atmospheric circulation that impacts climate sensitivity. Despite the critical role DDCs play in weather and climate, especially in the tropics and midlatitudes, their accurate simulation in state-of-the-art models remains extremely challenging.

“The interactions between aerosols and deep convection are very poorly understood for a number of reasons, one being that we don’t have a lot of key supporting observations of the processes going inside of the clouds during these interactions,” Wang said.

To overcome uncertainties found in climate models, the project will use advanced ground-based and satellite measurements to better observe cloud properties.

Wang and her team will also use machine learning techniques and high-resolution modeling to identify cause-and-effect links between aerosols, the environment, and convective vigor. They will examine DCCs in four different climate regions: the Southern Great Plains, Gulf Coast, the Amazon, and the mountains of Argentina.

“It means a lot to see this research funded,” Wang said. “I have a lot of responsibilities in managing this project, but it offers a good challenge. This is also a booster to my confidence in the research because it means people loved my ideas for the project. I had lots of support from folks at Brookhaven and other agencies to get to this point.”

Wang first joined Brookhaven Lab as a research associate in 2017. She currently serves as an instrument mentor for the gauges and disdrometers operated by the DOE Atmosphere Radiation Measurement Program.

Wang received her undergraduate degree in atmospheric science in 2010 and an M.S. in meteorology in 2013, both from Nanjing University of Information Science & Technology. She received a PhD in physics from the Université Pierre et Marie Curie in 2016.

Gregory Doerk is a materials scientist in the Electronic Nanomaterials Group of the Center for Functional Nanomaterials (CFN)—a DOE Office of Science User Facility at Brookhaven National Laboratory. Since joining the CFN in 2015, he has been leveraging the unique ability of some materials to self-assemble into organized molecular patterns and structures. Ultimately, the goal is to use these nanoscale architectures to control material properties for energy applications.

Through the DOE’s Early Career Research Program, Doerk will develop a new, transformative manufacturing strategy—pathway-directed self-assembly—to produce high-performance separation membranes for water purification. This research project is motivated by the global issues of water scarcity and pollution and the energy-intensive nature of current industrial separation processes.

Current membranes exhibit randomly oriented nanopores with a large size distribution, which severely limits their performance. Doerk will adapt spray-based processes, already adopted in industry for other applications, to direct the synthesis of self-assembled polymer membranes with well-aligned and uniformly sized nanopores. At the CFN, he will build an ultrasonic sprayer that uses high-frequency vibrations to deposit materials with controlled compositions on different substrates. As the polymer self-assembles, different spray processing parameters will be tuned to elucidate their effect on critical membrane structural properties, including pore morphology, orientation, and degree of order. To perform this real-time characterization, Doerk will integrate the sprayer with x-ray scattering beamlines at the National Synchrotron Light Source II (NSLS-II)—another DOE Office of Science User Facility at Brookhaven. Employing a fully autonomous workflow developed at Brookhaven with collaborators will accelerate the discovery of self-assembly pathways and identify those that provide the desired membrane functionality.

“Membranes are very sensitive to the way they’re made,” said Doerk. “Instead of relying on conventional trial and error, this project aims to introduce adaptive manufacturing processes by characterizing the properties of the synthesized materials in situ and adjusting the spray parameters—such as flow rate and solvent composition—on the fly. Receiving the Early Career award is a great honor and provides a unique opportunity to pursue this research with important technological applications.”

Doerk received a PhD and bachelor’s degree in chemical engineering from the University of California, Berkeley, and Case Western University, respectively. 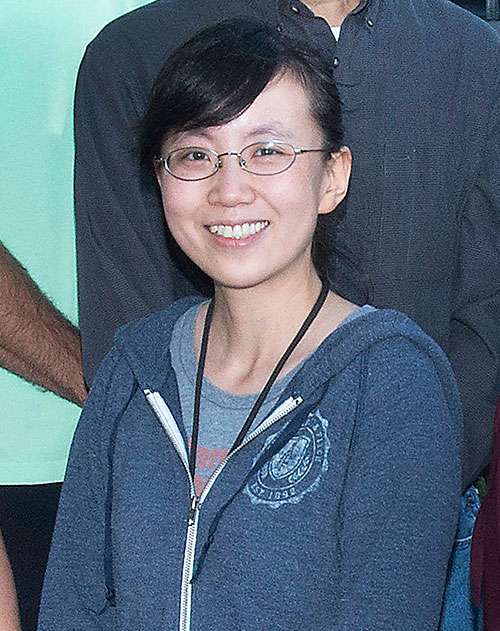 Mengjia Gaowei, an associate scientist in Brookhaven Lab’s Collider-Accelerator Department, will receive Early Career Award funding from DOE’s Office of Nuclear Physics to conduct research and development of a cathode for a high-intensity electron source in support of the future Electron-Ion Collider (EIC). This work will be essential for accelerating a beam of electrons that will be used to cool the ion beam at the EIC, a future nuclear physics research facility to be built at Brookhaven Lab.

As ions travel around the EIC at close to the speed of light they will tend to heat up and spread out. That reduces the chances of collisions between the ions and a counter-circulating beam of electrons. Scientists need to study many electron-ion interactions to learn about the internal building blocks of matter. So they are exploring ways to keep the ions tightly packed.

Gaowei’s work relates to an approach that uses cooling techniques—for example, where a separate accelerated beam of electrons mixes for a brief period with the ion beam to extract the heat from the spreading ions, much like the liquid coolant in a home refrigerator. She’ll conduct research on materials for a photocathode electron gun that will accelerate those cooling electrons. The goal is to find materials that, when activated by a laser, will produce a beam of high-brightness, high-current electrons that can be “bunched” to meet up with the bunches of ions circulating in the EIC. Her project will explore different methods to fabricate large single crystal photocathodes to improve their lifetime and other properties. She’ll use various methods, including x-ray studies at Brookhaven’s National Synchrotron Light Source II (NSLS-II), to study the materials’ crystal structure, bulk and surface properties, and chemical compositions. The aim is to identify the optimal characteristics for producing high-performance cathodes that will have a long lifetime—so they don’t need to be replaced frequently when the EIC is running.

“I’m truly honored to receive the Early Career Award and I’m grateful to be given this unique opportunity,” said Gaowei. “I’m looking forward to making new discoveries in the field of photocathode materials and supporting the electron source R&D for the EIC.”

Gaowei has been working on photocathode development for a low-energy electron cooling application at the Relativistic Heavy Ion Collider (RHIC)—a DOE Office of Science user facility for nuclear physics research. “I was delighted to see its success in the world’s first demonstration of bunched-beam electron cooling,” she said. “I believe my experience in that low-energy RHIC electron cooling project will be a great help in fulfilling the tasks in the cathode research for the EIC, and I’m really looking forward to the exciting research that is sure to come out of this new machine.”

Gaowei received her bachelor’s degree in applied physics at Shanghai Jiao Tong University in 2006, a master’s in condensed matter physics from the University of Chinese Academy of Sciences in 2009, and her PhD in materials science and engineering from Stony Brook University in 2014. She then joined Brookhaven Lab as a postdoctoral fellow conducting photocathode research, was promoted to assistant scientist in 2018, and associate scientist in 2021. She has more than 10 years of experience in semiconductor photocathode development, including multi-alkali antimonide, cesium telluride, Superlattice-GaAs (SL-GaAs) photocathodes and diamond electron amplifiers. She holds one patent with a second one pending. She was a 2016 R&D 100 Award finalist for work on an ultra-compact diamond x-ray monitor.