Results from Search for 'Chiral Magnetic Effect' at RHIC

Collisions of 'isobars' test effect of magnetic field, searching for signs of a broken symmetry 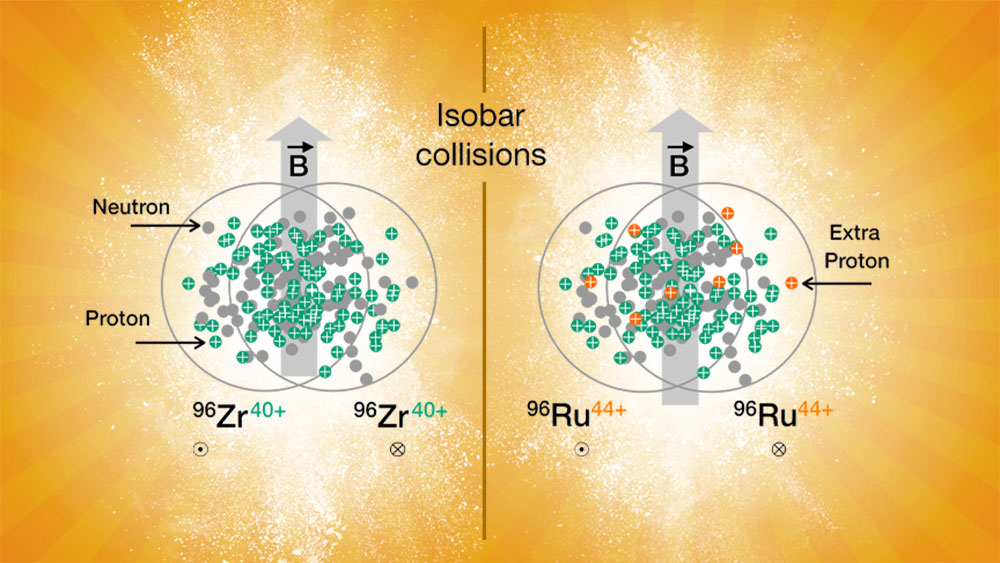 Physicists compared collisions of two different sets of isobars, which are ions that have the same overall mass but different numbers of protons—zirconium (96Zr), with 40 protons, and ruthenium (96Ru) with 44 protons. The higher proton number (and thus electric charge) in ruthenium should generate a stronger magnetic field during collisions than zirconium (indicated by size of gray arrows). Scientists expected the stronger magnetic field of ruthenium collisions to result in greater separation of charged particles emerging from those collisions than seen in zirconium collisions.

UPTON, NY—Physicists from the STAR Collaboration of the Relativistic Heavy Ion Collider (RHIC), a U.S. Department of Energy (DOE) Office of Science user facility for nuclear physics research at DOE’s Brookhaven National Laboratory, presented long-awaited results from a “blind analysis” of how the strength of the magnetic field generated in certain collisions affects the particles streaming out. The experiment was designed to look for evidence of a predicted physics phenomenon known as the “chiral magnetic effect.” It didn’t come out as initially predicted.

But even without a definitive signal supporting the existence of the chiral magnetic effect (CME), the experiment provides useful information, such as clues about where to look— including in other RHIC data.

“If there had been a modestly strong signal, we would have been able to see that,” said Evan Finch, a STAR collaborator from Southern Connecticut State University and a co-chair of the group involved in the CME search. “So, our blind analysis—where none of us knew key details related to the magnetic field in a given event as we were analyzing the data—succeeded in ruling out that kind of signal.

“Going ahead to look for a more subtle signal will depend on improving our understanding of the background conditions in these collisions, which will rely on contributions from theorists. We are not closing the door on anything,” Finch said.

To get insight into this result and why it matters, we have to take a step back—both to the beginning of research at RHIC, which has been operating at Brookhaven Lab since 2000, and to the very early universe, nearly 14 billion years ago!

Back to the beginning 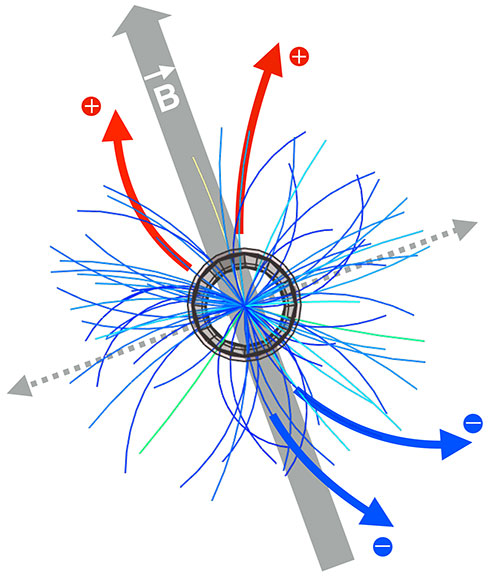 Earlier results from off-center collisions of gold ions at RHIC revealed an intriguing asymmetric separation of charged particles. In a given event, positively charged particles would emerge along the magnetic field (gray arrow) and negatively charged particles emerged in the opposite direction (other collisions produced the opposite separation). Scientists suspected this charge separation might be a hint of a "broken symmetry" within the hot matter, triggered through a process called the chiral magnetic effect. The collisions of isobars reported on today were designed to search for evidence of this effect by varying the strength of the magnetic field.

Since 2000, RHIC has collided a wide variety of ions—the positively charged naked nuclei that remain when atoms are stripped of their electrons. The energetic collisions “melt” the ions’ protons and neutrons, setting free their inner building blocks—quarks and gluons. Tracking particles that emerge from the quark-gluon plasma (QGP) created in these collisions gives scientists a way to learn about the early universe as it existed a fraction of a second after the Big Bang. QGP mimics what the universe was like before quarks and gluons coalesced to form the protons and neutrons that make up essentially everything we see in the universe today.

In a somewhat indirect way, probing RHIC’s broken symmetries could offer clues to one of the biggest questions in physics: why the universe is made only of matter.

“If the Big Bang produced equal amounts of matter and antimatter, these opposites would annihilate, leaving only radiation and we would not exist—no galaxies, no planets, no humans,” he said. “The big puzzle is to explain this asymmetry between matter and antimatter”—what tipped the balance in favor of matter.

The collisions at RHIC won’t answer that question directly. But exploring asymmetries in the QGP gives scientists a way to test ideas about how a symmetry violation underlying the matter-antimatter asymmetry arises at a fundamental level.

Nuclear physicists suspect RHIC’s charge-separation asymmetry might be caused, at least in part, by an interaction of the magnetic field generated in off-center collisions with each individual particle’s chirality. Chirality is a particle’s right- or left-handedness—determined by whether the particle is spinning clockwise or counterclockwise relative to its direction of motion. In order for the quarks that make up protons to exhibit definite chirality, they have to be nearly massless and allowed to “roam free”—as they are in the QGP, deconfined from the larger particles. The charge asymmetry suggested that tiny bubbles within the plasma might exhibit an asymmetry in the number of left- and right-handed particles.

“The interaction of those chirally imbalanced “bubbles” with the magnetic field produced by the colliding ions would induce a strong electric current—the chiral magnetic effect that results in the separation of electric charges,” said Brookhaven Lab physicist Aihong Tang, the other co-chair of the CME search group.

Based on this understanding, if the chiral magnetic effect is real, the separation of charges should become more apparent as the strength of the magnetic field increases. 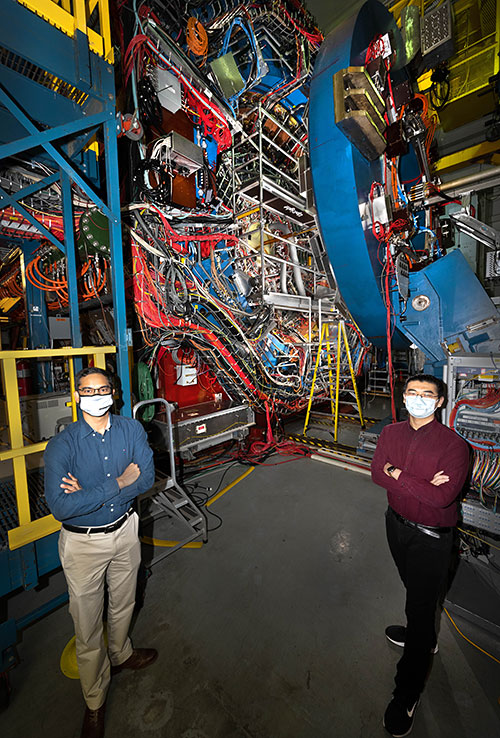 Brookhaven Lab physicist Prithwish Tribedy (left) and Yu Hu, a graduate student from Fudan University in China, in front of the STAR detector at the Relativistic Heavy Ion Collider (RHIC). Tribedy led one of five independent groups of STAR physicists performing a blind analysis of the RHIC isobar collisions, where no one knew which set of isobars the data came from as they were analyzing the results. Hu worked on the blind analysis as part of his Ph.D. thesis.

The STAR physicists devised a clever way to search for such a signal by colliding “isobars”—two sets of ions with the same mass but different numbers of positively charged protons. The swirl of those positive charges in off-center collisions is what generates the magnetic field. Changing the proton and neutron mix in the colliding ions is a way to turn the magnetic field strength “dial.”

RHIC scientists conducted these collisions in 2018, taking care to control everything they could. This included switching back and forth between the two types of collisions, sometimes even in the same day.

“Physicists and engineers in Brookhaven’s Collider-Accelerator Department worked with us to switch isobars without the collision rate dropping,” said STAR/Brookhaven physicist Prithwish Tribedy, who leads one of five groups of analyzers spread around the globe. “This was a remarkable accomplishment, which helped us to collect a huge amount of data and achieve the precision of our result.”

The STAR physicists also took great care to define the criteria they would follow to search for the expected signal, and analyzed the data blindly—that is, not knowing which data were from zirconium collisions and which were from ruthenium.

“We have been analyzing data for three years,” said Tang. “There were multiple measurements, five independent analysis groups, and a committee that kept secret how the blinding ‘recipe’ was done. There was also a committee that oversaw the analysis and reviewed the result. It required lots of coordination.”

This blinding was done to eliminate any bias in the measurements and in interpreting the results.

The unblinded results presented today and submitted for publication in the journal Physical Review C did not show evidence that ruthenium’s stronger magnetic field increased charge separation as predefined prior to the blind analysis.

The reason, the scientists suspect, is that their incredibly controlled experiment held a few surprises. Things beyond their control—like the shape of the colliding ions and different arrangements of the protons and neutrons within—could have affected the results. These differences between the two isobars would add to the “background” making the “signal” driven by magnetic field strength harder to detect.

“These are all very subtle effects, but because it’s a very high-precision measurement at sub-percent level, they matter,” said James Dunlop, a STAR physicist and the Brookhaven Lab Physics Department’s Associate Chair for Nuclear Physics, who oversaw the analysis. “Turning that precision into its maximum sensitivity requires better modeling of what these background differences are.”

Theorist Kharzeev, who first predicted the existence of the chiral magnetic effect in 2004 and has been looking for its signatures in heavy ion collisions and in condensed matter, said he would not be disappointed if the signal failed to appear. (We spoke to him before he knew the result.)

“Fortunately, this is not the end because the theory now indicates that the magnitude of the CME is larger at smaller collision energies. This means we still have a good chance of observing this effect by analyzing the data from lower-energy RHIC collisions,” he said.

“For this effect to be observed you need the magnetic field. And when the collision energy is too high, the nuclei pass through each other so quickly that the magnetic field has a very short lifetime. At lower energy, the created magnetic field ‘lives’ longer and there should be a larger charge separation,” he explained.

The data from the isobar run will help guide that search by providing information about the signal-to-background ratio.

“We will know the precision we have to shoot for in future analysis,” Kharzeev said.

“Our colleagues’ efforts and these resources were essential to our ability to analyze such a large volume of data. In particular, for the last phase of the analysis this June and July, we made use of all the computer nodes of the SDCC to finish the analysis in time for this announcement. We are also grateful to a dedicated team that determined centrality (how off-center a collision is) so we could conveniently conduct our study,” Tribedy said.

Brookhaven Lab’s role in this research and operations at RHIC are supported by funding from the DOE Office of Science. Additional funders are listed in the acknowledgements section of the submitted manuscript.