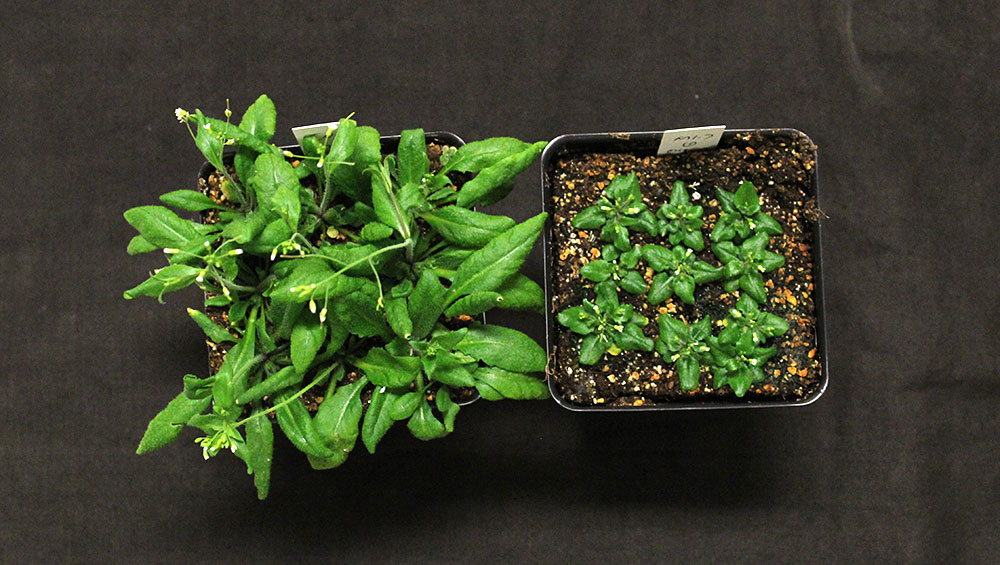 UPTON, NY—Scientists seeking to unravel the details of how plants produce and accumulate oil have identified a new essential component of the assembly line. They discovered a particular sterol—a molecule related to cholesterol—that plays a key role in the formation of oil droplets.

“This research greatly extends our understanding of the molecular factors that govern the formation of lipid droplets, which are vital organelles for oil storage and metabolism in all eukaryotic organisms,” said Changcheng Xu, a biologist at the U.S. Department of Energy’s (DOE) Brookhaven National Laboratory, who led the study. The findings, published in Nature Communications, may suggest new ways to engineer the oil content of a variety of plant tissues.

The work may be particularly important for informing genetic engineering strategies aimed at boosting the oil content of leaves and stems. These plant tissues usually do not accumulate oil, but they could be engineered as an abundant source of sustainable oils for making biofuels and other commodity products, the scientists say.

The findings also apply to the accumulation of oil in plant seeds, the main place oils naturally accumulate in plants. These natural reservoirs of plant oils provide nutrition for plant embryos and seedlings—as well as animals and humans.

“We found that a deficiency in a particular type of sterol causes a drop in oil accumulation in seeds and leaves,” said Xu. 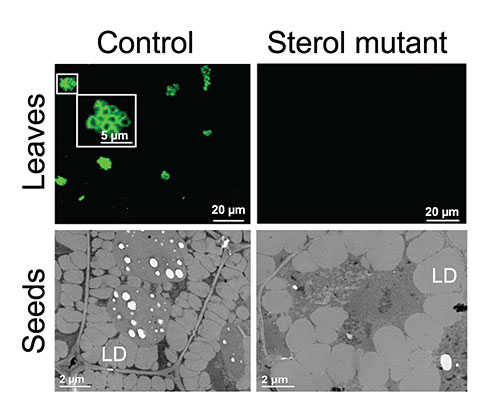 Droplets glow green Brookhaven Lab scientists engineered Arabidopsis plants to express green fluorescent protein attached to oleosin, a protein that stabilizes lipid droplets (LDs). In the upper row, those LDs are easy to spot under a fluorescent microscope in leaves of control plants (left) but not in leaves of mutants deficient in sterols (right). The lower row electron microscopic images show an increase in LD size but a decrease in LD number in seeds of sterol mutants.

Xu and his team have been working for years to increase oil accumulation in plant leaves and stems.

“Leaves compared with seeds are much more abundant as a possible bioenergy material,” he noted. “Also, because the oil in seeds is used for food, we’re working to accumulate oil and other commodity bioproducts in non-seed parts of plants—like leaves and stems—to avoid competition between food and fuel.”

The team has made some strides in getting leaves to accumulate substantial quantities of oil, using the common laboratory plant Arabidopsis.

They developed a neat way to track oil accumulation. Through genetic engineering, they created Arabidopsis plants in which a green fluorescent protein is always attached to a protein called oleosin. Oleosin only accumulates on the surface of lipid droplets. It forms part of the membrane surrounding these oil-storage compartments within cells to help stabilize them. If a sample of plant tissue—leaf, stem, or seed—contains lipid droplets, they stand out as little green dots under a fluorescence microscope.

“We treated our Arabidopsis plants with a mutagen to try to trigger mutations that would increase oil accumulation,” Xu said, using the fluorescence technique to identify strains with more and/or bigger green dots.

Ironically, they made their discovery about sterol in an Arabidopsis strain that accumulated almost no oil.

“The main purpose of the current work was to figure out which genetic modification caused this dramatic drop in oil accumulation,” Xu said. “We thought tracking down this gene might give us some new genes/proteins that are important in lipid droplet formation or accumulation.” 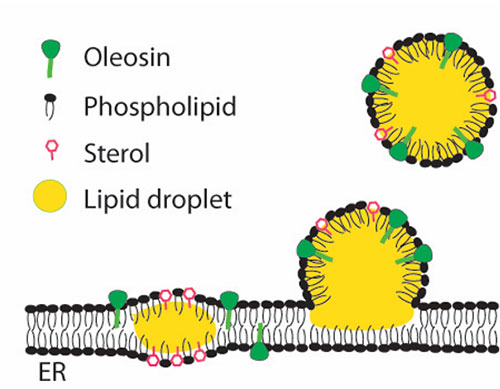 Oil droplet formation Oil (yellow) accumulates between the layers of the membrane that forms the endoplasmic reticulum (ER)—a network of membranes within the cytoplasm of plant cells. Droplets grow and eventually pinch off to become suspended in the cytoplasm. But this process only happens in certain microdomains that are rich in sterols and oleosins along the membrane. The Brookhaven team hypothesizes that sterol is essential to the formation of these droplet-forming microdomains.

At the microscopic scale, scientists know that lipid droplets form in the “endoplasmic reticulum,” or ER, of cells. That’s an internal network of membranes within cells (not the membrane surrounding the cell) that acts like a sort of factory—assembling and packaging various materials such as proteins and lipids.

Lipid storage droplets form when oil begins to accumulate between the two layers of the ER membrane, but only in certain regions of the ER. Eventually, when enough oil is present, the little membrane bits pinch off leaving the oil encapsulated in self-contained compartments.

As the study at Brookhaven shows, studying a plant that doesn’t accumulate these lipid droplets can offer clues to the biochemical factors that drive the process—and what’s unique about the particular ER domains where it occurs.

Zeroing in on the gene

To figure out which mutation triggered the dramatic drop in oil accumulation, the Brookhaven team used a technique known as positional cloning—a way of searching every region of chromosomes to pinpoint a particular gene that is responsible for a characteristic of interest. The technique narrowed the search to a specific region in one of the plant’s chromosomes. 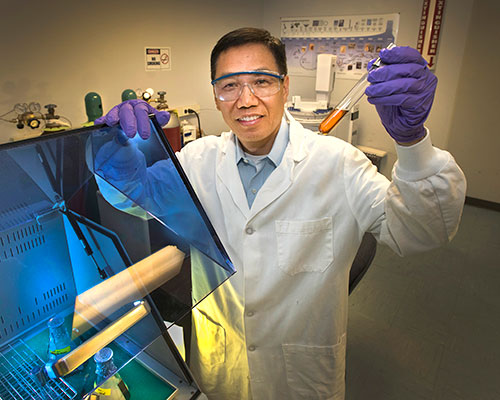 Brookhaven lab biologist Changcheng Xu and his team have been exploring ways to get plants to accumulate more oils in leaves and stems, abundant vegetative tissues that could be harvested for bioenergy applications.

After using whole-genome sequencing to search for any mutation in this region, the team identified a gene they suspected was involved. The gene codes for an enzyme responsible for one biochemical step in the multi-step synthesis of sterol, a molecule related to cholesterol found in ER and other cellular membranes.

By selectively “knocking out” the normal (unmutated) version of this gene, the scientists were able to duplicate the effect of the mutation. That is, plants with the gene knocked out accumulated no lipid droplets. In addition, adding back the unmutated gene restored oil droplet accumulation.

But the scientists went further. They also studied what would happen if they mutated genes for enzymes “upstream” from this particular enzyme in the multi-step sterol synthesis pathway. And they measured sterol levels in these mutants.

The detailed studies allowed them to zero in on the specific type of sterol that, when deficient, results in low oil accumulation.

Mutations in the same genes resulted in reduced oil accumulation in leaves and seeds. In seeds, where lipid droplets are easier to see, the scientists also conducted quantitative studies of their shapes and sizes, using a transmission electron microscope and a confocal microscope at the Center for Functional Nanomaterials (CFN) at Brookhaven Lab.

Together the results provide evidence of a universal role for this particular sterol in lipid droplet formation.

Now that they know what happens when these genes are turned off, the scientists suggest that strategies to turn them on and ramp up their expression could be one way to increase oil accumulation in leaves, stems, or seeds.

The team will be exploring these strategies in future experiments.