The following news release was originally issued by Rice University on September 20, 2021. It follows up on research results from the STAR detector at the Relativistic Heavy Ion Collider (RHIC) showing that collisions of photons (particles of light) can create matter/antimatter pairs. The professor and postdoctoral fellow involved in the research at Rice are both members of the STAR collaboration, and also the CMS collaboration at the Large Hadron Collider (LHC). The Rice story describes how the CMS measurements were motivated by STAR and how new measurements at CMS can guide the field toward future measurements—an illustration of how RHIC and the LHC together advance science. 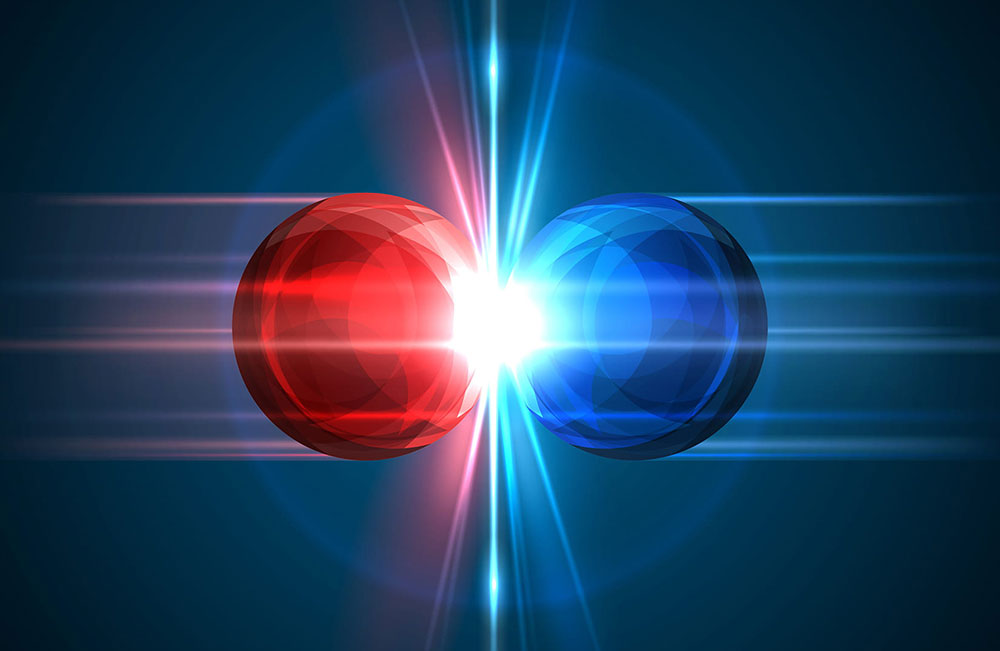 Rice physicists teamed with colleagues at Europe's Large Hadron Collider to study matter-generating collisions of light. Researchers showed the departure angle of debris from the smashups is subtly distorted by quantum interference patterns in the light prior to impact. Illustration by 123rf.com

Hot on the heels of proving an 87-year-old prediction that matter can be generated directly from light, Rice University physicists and their colleagues have detailed how that process may impact future studies of primordial plasma and physics beyond the Standard Model.

“We are essentially looking at collisions of light,” said Wei Li, an associate professor of physics and astronomy at Rice and co-author of the study published in Physical Review Letters.

“We know from Einstein that energy can be converted into mass,” said Li, a particle physicist who collaborates with hundreds of colleagues on experiments at high-energy particle accelerators like the European Organization for Nuclear Research’s Large Hadron Collider (LHC) and Brookhaven National Laboratory’s Relativistic Heavy Ion Collider (RHIC).

Accelerators like RHIC and LHC routinely turn energy into matter by accelerating pieces of atoms near the speed of light and smashing them into one another. The 2012 discovery of the Higgs particle at the LHC is a notable example. At the time, the Higgs was the final unobserved particle in the Standard Model, a theory that describes the fundamental forces and building blocks of atoms. 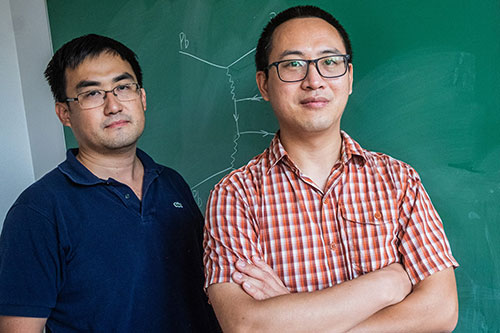 Rice physics professor Wei Li (left) and postdoctoral research associate Shuai Yang teamed with colleagues at the Large Hadron Collider's (LHC) Compact Muon Solenoid experiment to study matter-generating collisions of light that occurred in heavy ion experiments at LHC. Yang lead-authored a newly published study that detailed how the departure angle of debris from the smashups is subtly distorted by quantum interference patterns prior to impact. Photo by Jeff Fitlow

Impressive as it is, physicists know the Standard Model explains only about 4% of the matter and energy in the universe. Li said this week’s study, which was lead-authored by Rice postdoctoral researcher Shuai Yang, has implications for the search for physics beyond the Standard Model.

“There are papers predicting that you can create new particles from these ion collisions, that we have such a high density of photons in these collisions that these photon-photon interactions can create new physics beyond in the Standard Model,” Li said.

Yang said, “To look for new physics, one must understand Standard Model processes very precisely. The effect that we’ve seen here has not been previously considered when people have suggested using photon-photon interactions to look for new physics. And it’s extremely important to take that into account.”

The effect Yang and colleagues detailed occurs when physicists accelerate opposing beams of heavy ions in opposite directions and point the beams at one another. The ions are nuclei of massive elements like gold or lead, and ion accelerators are particularly useful for studying the strong force, which binds fundamental building blocks called quarks in the neutrons and protons of atomic nuclei. Physicists have used heavy ion collisions to overcome those interactions and observe both quarks and gluons, the particles quarks exchange when they interact via the strong force.

But nuclei aren’t the only things that collide in heavy ion accelerators. Ion beams also produce electric and magnetic fields that shroud each nuclei in the beam with its own cloud of light. These clouds move with the nuclei, and when clouds from opposing beams meet, individual particles of light called photons can meet head-on.

In a PRL study published in July, Yang and colleagues used data from RHIC to show photon-photon collisions produce matter from pure energy. In the experiments, the light smashups occurred along with nuclei collisions that created a primordial soup called quark-gluon plasma, or QGP.

Yang’s Ph.D. thesis work on the RHIC data published in PRL in 2018 suggested photon collisions might be affecting the plasma in a slight but measurable way. Li said this was both intriguing and surprising, because the photon collisions are an electromagnetic phenomena, and quark-gluon plasmas are dominated by the strong force, which is far more powerful than the electromagnetic force.

He said a variety of theories were offered to explain Yang’s unexpected findings.

“One proposed explanation is that the photon-photon interaction will look different not because of quark-gluon plasma, but because the two ions just get closer to each other,” Li said. “It’s related to quantum effects and how the photons interact with each other.”

If quantum effects had caused the anomalies, Yang surmised, they could create detectable interference patterns when ions narrowly missed one another but photons from their respective light clouds collided.

“So the two ions, they do not strike each other directly,” Yang said. “They actually pass by. It’s called an ultraperipheral collision, because the photons collide but the ions don’t hit each other.” 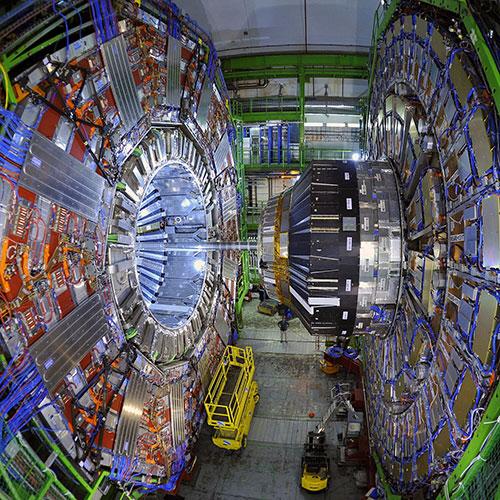 Theory suggested quantum interference patterns from ultraperipheral photon-photon collisions should vary in direct proportion to the distance between the passing ions. Using data from the LHC’s Compact Muon Solenoid (CMS) experiment, Yang, Li and colleagues found they could determine this distance, or impact parameter, by measuring something wholly different.

“The two ions, as they get closer, there’s a higher probability the ion can get excited and start to emit neutrons, which go straight down the beam line,” Li said. “We have a detector for this at CMS.”

Each ultraperipheral photon-photon collision produces a pair of particles called muons that typically fly from the collision in opposite directions. As predicted by theory, Yang, Li and colleagues found that quantum interference distorted the departure angle of the muons. And the shorter the distance between the near-miss ions, the greater the distortion.

Li said the effect arises from the motion of the colliding photons. Although each is moving in the direction of the beam with its host ion, photons can also move away from their hosts.

“The photons have motion in the perpendicular direction, too,” he said. “And it turns out, exactly, that that perpendicular motion gets stronger as the impact parameter gets smaller and smaller.

“This makes it appear like something’s modifying the muons,” Li said. “It looks like one is going at a different angle from the other, but it’s really not. It’s an artifact of the way the photon’s motion was changing, perpendicular to the beam direction, before the collision that made the muons.”

Yang said the study explains most of the anomalies he previously identified. Meanwhile, the study established a novel experimental tool for controlling the impact parameter of photon interactions that will have far-reaching impacts.

“We can comfortably say that the majority came from this QED effect,” he said. “But that doesn’t rule out that there are still effects that relate to the quark-gluon plasma. This work gives us a very precise baseline, but we need more precise data. We still have at least 15 years to gather QGP data at CMS, and the precision of the data will get higher and higher.”