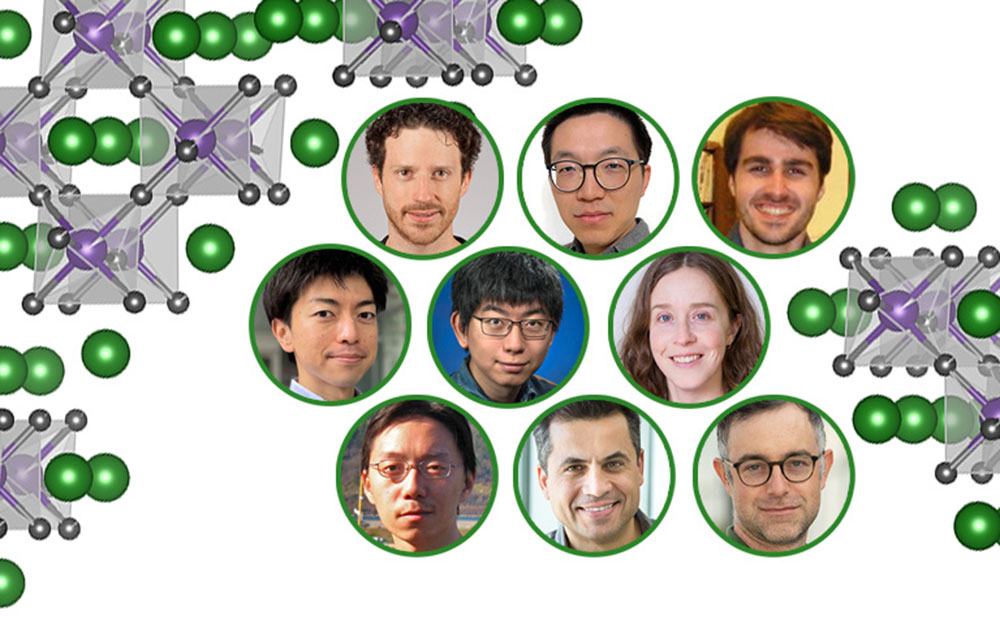 “Broadly speaking, this is a novel type of magnet,” said Brookhaven Lab physicist Mark Dean, senior author on a paper describing the research just published in Nature Communications. “Since magnetic materials lie at the heart of much of the technology around us, new types of magnets are both fundamentally fascinating and promising for future applications.”

The new magnetic state involves strong magnetic attraction between electrons in a layered material that make the electrons want to arrange their magnetic moments, or “spins,” into a regular up-down “antiferromagnetic” pattern. The idea that such antiferromagnetism could be driven by quirky electron coupling in an insulating material was first predicted in the 1960s as physicists explored the differing properties of metals, semiconductors, and insulators.

“Sixty years ago, physicists were just starting to consider how the rules of quantum mechanics apply to the electronic properties of materials,” said Daniel Mazzone, a former Brookhaven Lab physicist who led the study and is now at the Paul Scherrer Institut in Switzerland. “They were trying to work out what happens as you make the electronic ‘energy gap’ between an insulator and a conductor smaller and smaller. Do you just change a simple insulator into a simple metal where the electrons can move freely, or does something more interesting happen?”

The prediction was that, under certain conditions, you could get something more interesting: namely, the “antiferromagnetic excitonic insulator” just discovered by the Brookhaven team.

Why is this material so exotic and interesting? To understand, let’s dive into those terms and explore how this new state of matter forms.

An artist's impression of how the team identified this historic phase of matter. The researchers used x-rays to measure how spins (blue arrows) move when they are disturbed and were able to show that they oscillate in length in the pattern illustrated above. This special behavior occurs because the amount of electrical charge at each site (shown as yellow disks) can also vary and is the fingerprint used to pin down the novel behavior.

In an antiferromagnet, the electrons on adjacent atoms have their axes of magnetic polarization (spins) aligned in alternating directions: up, down, up, down and so on. On the scale of the entire material those alternating internal magnetic orientations cancel one another out, resulting in no net magnetism of the overall material. Such materials can be switched quickly between different states. They’re also resistant to information being lost due to interference from external magnetic fields. These properties make antiferromagnetic materials attractive for modern communication technologies.

Next we have excitonic. Excitons arise when certain conditions allow electrons to move around and interact strongly with one another to form bound states. Electrons can also form bound states with “holes,” the vacancies left behind when electrons jump to a different position or energy level in a material. In the case of electron-electron interactions, the binding is driven by magnetic attractions that are strong enough to overcome the repulsive force between the two like-charged particles. In the case of electron-hole interactions, the attraction must be strong enough to overcome the material’s “energy gap,” a characteristic of an insulator.

“An insulator is the opposite of a metal; it’s a material that doesn’t conduct electricity,” said Dean. Electrons in the material generally stay in a low, or “ground,” energy state. “The electrons are all jammed in place, like people in a filled amphitheater; they can’t move around,” he said. To get the electrons to move, you have to give them a boost in energy that’s big enough to overcome a characteristic gap between the ground state and a higher energy level.

In very special circumstances, the energy gain from magnetic electron-hole interactions can outweigh the energy cost of electrons jumping across the energy gap.

Now, thanks to advanced techniques, physicists can explore those special circumstances to learn how the antiferromagnetic excitonic insulator state emerges.

The team started their investigation at high temperature and gradually cooled the material. With cooling, the energy gap gradually narrowed. At 285 Kelvin (about 53 degrees Fahrenheit), electrons started jumping between the magnetic layers of the material but immediately formed bound pairs with the holes they’d left behind, simultaneously triggering the antiferromagnetic alignment of adjacent electron spins. Hidemaro Suwa and Christian Batista of the University of Tennessee performed calculations to develop a model using the concept of the predicted antiferromagnetic excitonic insulator, and showed that this model comprehensively explains the experimental results.

“Using x-rays we observed that the binding triggered by the attraction between electrons and holes actually gives back more energy than when the electron jumped over the band gap,” explained Yao Shen. “Because energy is saved by this process, all the electrons want to do this. Then, after all electrons have accomplished the transition, the material looks different from the high-temperature state in terms of the overall arrangement of electrons and spins. The new configuration involves the electron spins being ordered in an antiferromagnetic pattern while the bound pairs create a ‘locked-in’ insulating state.”

The identification of the antiferromagnetic excitonic insulator completes a long journey exploring the fascinating ways electrons choose to arrange themselves in materials. In the future, understanding the connections between spin and charge in such materials could have potential for realizing new technologies.

Brookhaven Lab’s role in this research was funded by the DOE Office of Science, with collaborators receiving funding from a range of additional sources noted in the paper. The scientists also used computational resources of the Oak Ridge Leadership Computing Facility, a DOE Office of Science user facility at Oak Ridge National Laboratory.