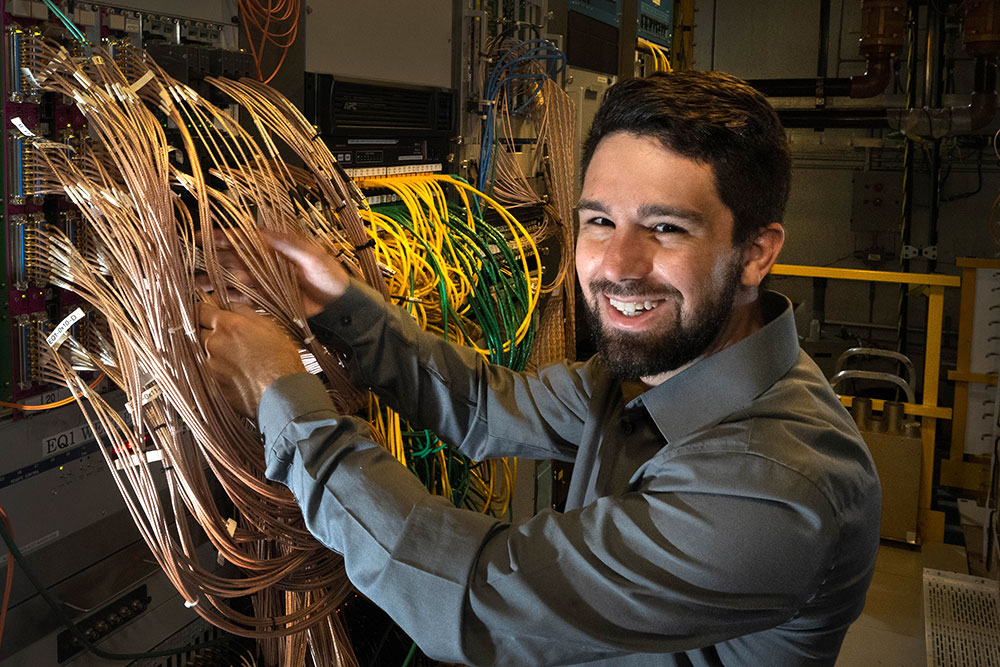 The annual awards announced by the Blavatnik Family Foundation and the New York Academy of Sciences (NYAS) honor postdoctoral scientists from academic research institutions across New York, New Jersey, and Connecticut. Brandenburg will be honored at the 2022 NYAS Gala on November 14 and receive a $10,000 prize.

Among his achievements in experimental high-energy nuclear physics, Brandenburg is being recognized for his role in research that produced evidence of processes that had been predicted by scientists more than 80 years ago.

"Physicists have tried to convert light into matter for almost a century—to achieve the concept immortalized in Einstein's famous equation, E=mc2,” Brandenburg said. “I found an unlikely approach with near misses in an atom smasher to finally make it possible.”

Brandenburg is a lead author on the recent discovery that demonstrated that pairs of electrons and positrons—particles of matter and antimatter—can be created directly by colliding particles of light, or “real photons.” This occurrence was predicted in 1934 by physicists Gregory Breit and John A. Wheeler, but the capabilities to demonstrate it didn’t exist at the time.

Fast forward to the Relativistic Heavy Ion Collider (RHIC)—a DOE Office of Science user facility for nuclear physics research at Brookhaven Lab. At RHIC, physicists collide particles at nearly the speed of light to reveal the properties of the building blocks of visible matter. By analyzing data captured by RHIC’s STAR detector, Brandenburg observed how matter is produced when photon “clouds” surrounding gold ions collide as the particles pass closely by one another while speeding in opposite directions.

Brandenburg also played a role in other major observations, including evidence of the birefringence effects in a vacuum. Scientists theorized decades ago that a vacuum of empty space could be polarized by a powerful magnetic field. Such a polarized field would deflect—or bend—the paths of photons in a way that depends on the photons’ own polarization. At RHIC, scientists measured how the polarization of the light affected whether the light was “absorbed” by the magnetic field.

Brandenburg joined Brookhaven in 2018 as a postdoctoral research associate jointly with Lab's STAR group and the Center for Frontiers in Nuclear Science. Since then, he’s developed software for the suite of detectors in the ongoing STAR forward upgrade project.

In 2020, Brandenburg was selected as a Goldhaber Distinguished Fellow—a prestigious fellowship award to scientists with exceptional talent and credentials who have a strong desire for independent research at the frontiers of their fields. He earned a bachelor’s degree in physics from the University of Florida and both his master’s degree and Ph.D. in heavy ion physics from Rice University. He received Elsevier’s Young Science Award for Best Experimental Talk at QuarkMatter 2019.

Brookhaven's nuclear physics research at RHIC is supported by the DOE Office of Science (NP).