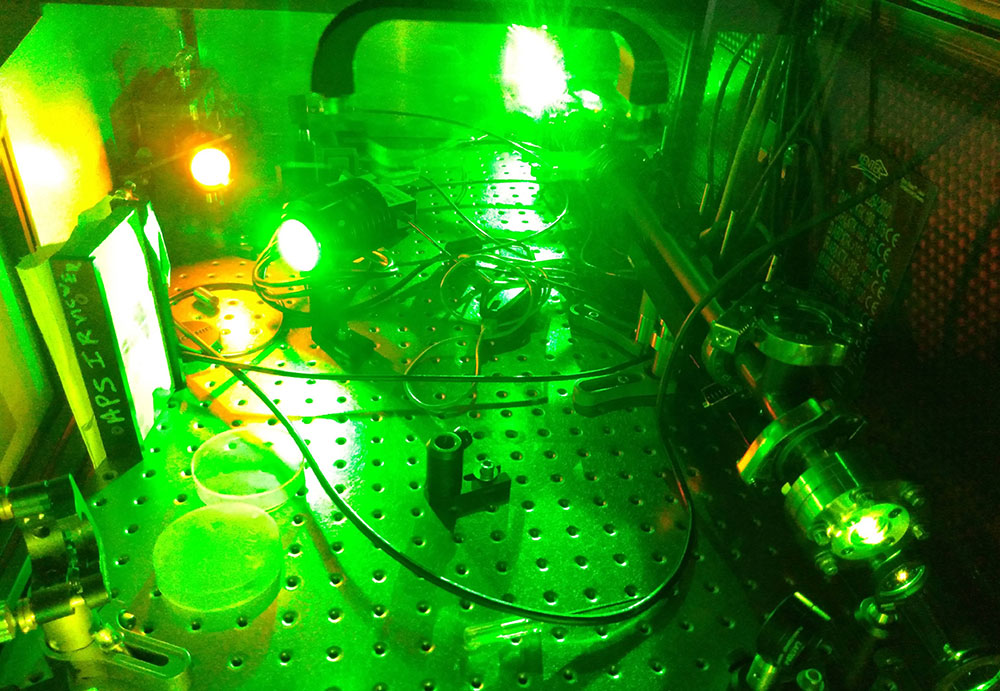 Shooting a green laser through a tube filled with a particular ionic liquid (right side of photo) can easily convert the green laser light to orange (upper left)—a long-sought color for medical applications. The method can be tailored for different color shifts by choosing different ionic liquids.

UPTON, NY—Lasers are intense beams of colored light. Depending on their color and other properties, they can scan your groceries, cut through metal, eradicate tumors, and even trigger nuclear fusion. But not every laser color is available with the right properties for a specific job. To fix that, scientists have found a variety of ways to convert one color of laser light into another. In a study just published in the journal Physical Review Applied, scientists at the U.S. Department of Energy’s (DOE) Brookhaven National Laboratory demonstrate a new color-shifting strategy that’s simple, efficient, and highly customizable.

The new method relies on interactions between the laser and vibrational energy in the chemical bonds of materials called “ionic liquids.” These liquids are made only of positively and negatively charged ions, like ordinary table salt, but they flow like viscous fluids at room temperature. Simply shining a laser through a tube filled with a particular ionic liquid can downshift the laser’s energy and change its color while retaining other important properties of the laser beam.

The paper describes using the method to achieve color changes that have been difficult to produce using other methods, including a shift from green laser light to orange—long-sought for medical applications such as treating skin and eye conditions. 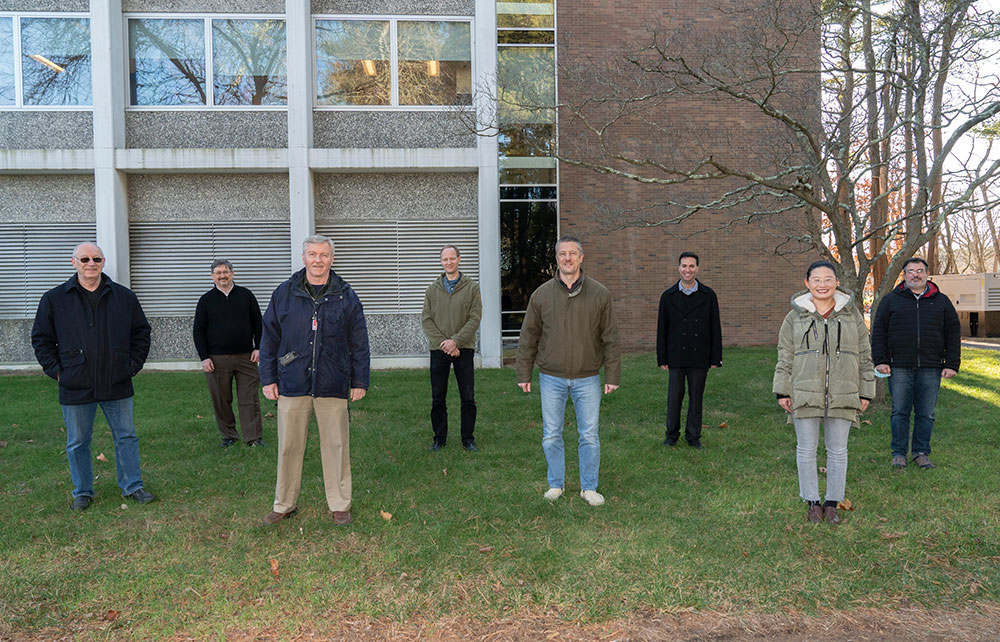 The idea grew out of a project to boost the capabilities of a unique, high-power carbon-dioxide (CO2) laser at Brookhaven Lab’s Accelerator Test Facility (ATF). Scientists use the ATF, a DOE Office of Science user facility, to explore innovative concepts ranging from laser-energized particle accelerators to compact and bright x-ray sources.

“ATF’s CO2 laser is the only ultra-short-pulse, long-wavelength laser in the world; there are experiments you can do there that you can’t do anywhere else,” said study co-author Rotem Kupfer, a former postdoctoral fellow at ATF. “Replacing the method of pumping this laser from commonly used electric discharge to optical excitation should improve the beam quality and the repetition rate to allow even better experiments.”

To create a laser with the appropriate wavelength (a.k.a. color) for optical pumping, the scientists sought to shift the wavelength of an existing laser. They chose the general approach of stimulated Raman scattering, which harnesses the vibrational frequencies of molecules in a solid, liquid, or gas.

This video shows green laser light being converted to orange. The flickering is an artifact of the camera shutter speed and laser flashing not being in sync.

“Basically, the laser deposits energy into the molecular vibrations—the squishing and stretching of the chemical bonds that make up the material. Then the photons (particles of light) that come out have the original energy minus the energy of those vibrations,” Kupfer said. The lower-energy photons have a longer wavelength, or in other words, a different color.

In gases, the process is fairly simple because you are dealing with single molecules. But those molecules have limited vibrational frequencies, which limits the types of shifts. And diffuse gaseous molecules mean scattering efficiency is low. Solids, with more tightly packed molecules, could improve efficiency. But their more complex vibrational frequencies complicate the recipe for growing such materials with the desired properties, so making these materials is costly.

“Liquids are somewhere in between,” Wishart said. “You’re still dealing with single molecules, but denser, meaning higher efficiency than gases. And with ionic liquids, you can engineer the molecules to give you the frequency you need.”

Optically transparent ionic liquids also make it easy to avoid background absorption of light and their higher viscosity avoids laser scattering from acoustic waves, which competes with and diminishes the color-shifting effect in low-viscosity liquids like water.

As the scientists worked on choosing an ideal ionic liquid for pumping the CO2 laser, they realized the color-shift approach using ionic liquids had even broader appeal. In the paper they describe its use in additional color changes, including the elusive green-to-orange shift.

“There are a lot of hard ways to do Raman shifting. But for this one, we just filled a tube with a properly selected ionic liquid, shot a laser in from one end and we got the color we wanted out—without any fine tuning,” Wishart said.

“Other methods for achieving such a color shift require complex optical setups or the use of toxic materials such as dyes dissolved in solvents,” Kupfer said. “Plus, those other processes ‘break’ the molecules; they wear out and have to be replaced. In our case, it is a balance sheet. The molecules stay unharmed.”

Wishart agreed: “It shakes up the molecules but doesn’t break them.”

The scientists say there are a range of improvements that could optimize the process, but that overall, made-to-order ionic liquids are a platform for efficient, simple, and adjustment-free laser color shifting for numerous industrial and technological purposes.

This research, which was conducted entirely at Brookhaven Lab, was funded by the Lab’s Laboratory Directed Research and Development grants.