Scientists invented a new way of tracking electronic properties inside materials, and used it to visualize magnetic domains in a previously unseen way 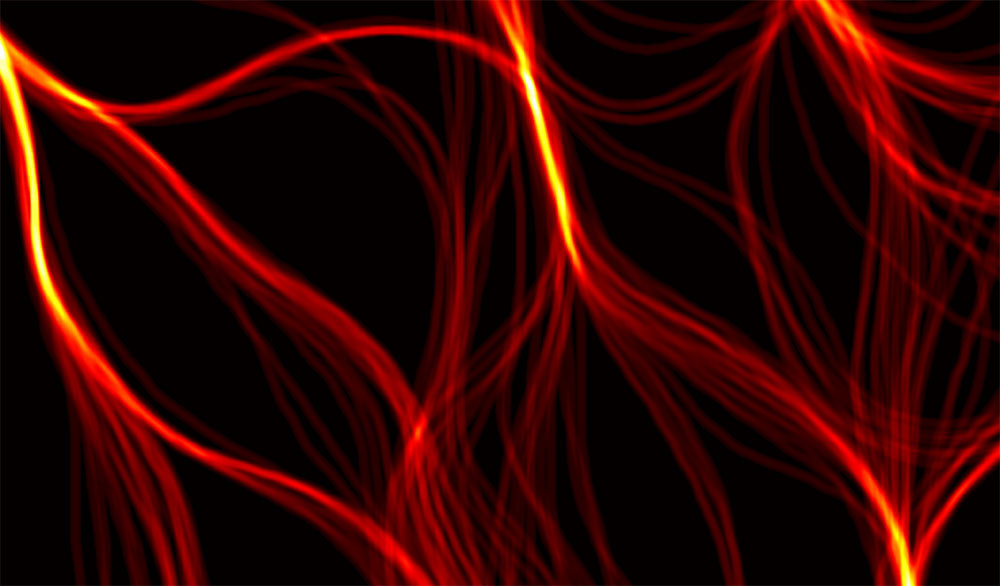 The image shows the areas where the borders of magnetic domains accumulate over time. It is similar to a photo of a traffic intersection taken at night with a long exposure time. In such a photo, we would see brighter areas along the paths that most cars' headlights traveled. Here we see brighter areas where most domain walls come together.

UPTON, NY—Everyone knows that holding two magnets together will lead to one of two results: they stick together, or they push each other apart. From this perspective, magnetism seems simple, but scientists have struggled for decades to really understand how magnetism behaves on the smallest scales. On the near-atomic level, magnetism is made of many ever-shifting kingdoms—called magnetic domains—that create the magnetic properties of the material. While scientists know these domains exist, they are still looking for the reasons behind this behavior.

Now, a collaboration led by scientists from the U.S. Department of Energy’s Brookhaven National Laboratory, Helmholtz-Zentrum Berlin (HZB), the Massachusetts Institute of Technology (MIT), and the Max Born Institute (MBI) published a study in Nature in which they used a novel analysis technique—called coherent correlation imaging (CCI)—to image the evolution of magnetic domains in time and space without any previous knowledge. The scientists could not see the “dance of the domains” during the measurement but only afterward, when they used the recorded data to “rewind the tape.”

The “movie” of the domains shows how the boundaries of these domains shift back and forth in some areas but stay constant in others. The researchers attribute this behavior to a property of the material called “pinning.” While pinning is a known property of magnetic materials, the team could directly image for the first time how a network of pinning sites affects the motion of interconnected domain walls. 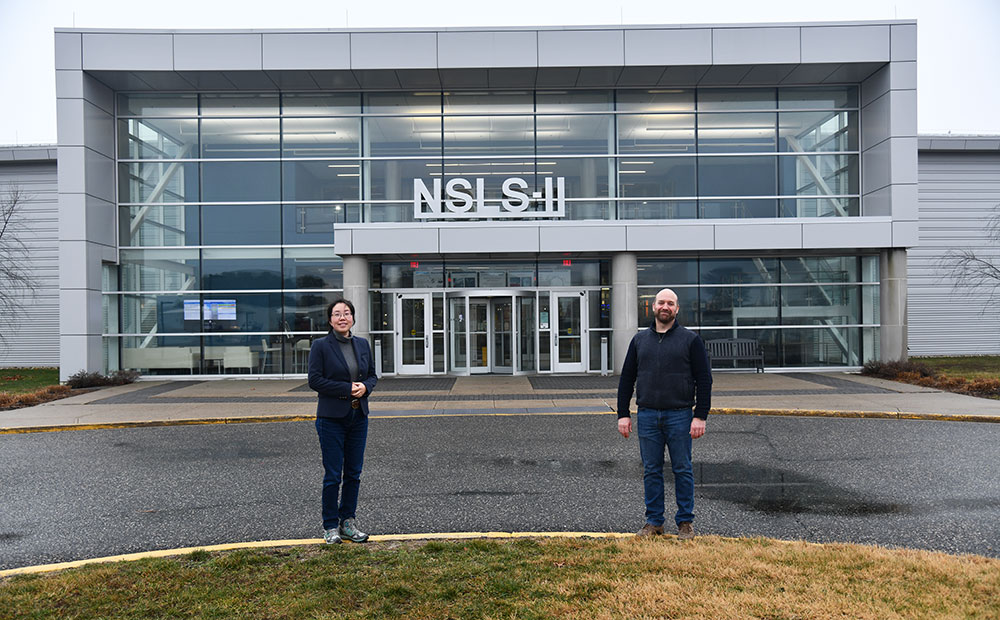 “Many details about the changes in magnetic materials are only accessible through direct imaging, which we couldn’t do until now. It’s basically a dream come true for studying magnetic motion in materials,” said Wen Hu, scientist at the National Synchrotron Light Source II (NSLS-II) and co-corresponding author of the study.

The researchers expect CCI to help unlock other properties of the microcosm of magnetism—such as degrees of freedom or hidden symmetries—that previously weren’t accessible through other techniques. CCI’s usefulness also represents a breakthrough beyond magnetic materials since the technique can be transferred to different measurement techniques and research areas. One area that might benefit the most from understanding the movement of magnetic domains on the nanoscale (one nanometer is 0.000000038 inches!) is novel computing. Novel memory technology could leverage special magnetic domains called “skyrmions.” 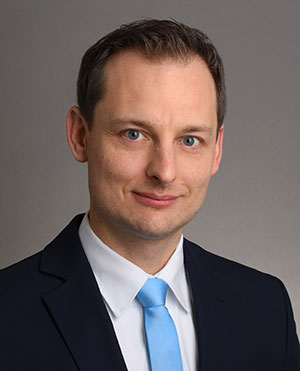 “Skyrmions are interesting for artificial intelligence computing because they possess a property that is similar to our short-term memory,” said Felix Büttner, group leader at Helmholtz-Zentrum Berlin, professor at the University of Augsburg and co-corresponding of the study. “In current computing architectures everything is linear, which means that the memory is separated from the processor. This is not an issue for most applications but, for example, it makes speech recognition difficult. In speech recognition, the computing part only processes the incoming words, but doesn’t remember what has been said previously. In addition, sending that information back from the memory takes a lot of energy. By using skyrmions, we may be able to harness their short-term memory in some way and avoid these issues.”

However, before engineers and scientists can develop technology that uses this feature, they first need to understand how to manipulate skyrmions and other magnetic domains. This was the intention when the collaboration between NSLS-II, Geoffrey Beach’s group at MIT, and MBI formed. They wanted to investigate how skyrmions in their magnetic devices reacted to external stimuli, specifically in an external magnetic field. HZB joined the collaboration when Büttner moved from MIT to Berlin.

“In 2018, we had measurement time at the Coherent Soft X-ray Scattering (CSX) beamline at NSLS-II; however, the experimental chamber we wanted to use wasn’t ready. That meant we didn’t have the external magnetic field, but we had a back-up plan for studying the thermal motion,” said Hu, who is part of the CSX beamline team.

Büttner added, “I expected this experiment would be another demonstration experiment but nothing more. To be honest, I was surprised we saw thermal motion at all. We studied the same device at room temperature and barely saw any thermal motion. This time we studied it at 310 Kelvin, which is about 98 Fahrenheit, and we saw so much more. That was surprising! And it was just the beginning.”

How a back-up plan leads to hidden insights

In their experiment, the team used coherent x-rays from the CSX beamline to take a series of snapshots of the magnetic domains. CSX is part of the advanced suite of research tools available at NSLS-II for studying materials. The research team used the beamline in a holography setup to take the images. In most holography experiments, scientists take one image every three to four seconds, however, the fast detector at the CSX beamline allowed the team to take up to 100 images per second.

“After the measurement, we started a normal data analysis by adding up 200 images. Once we did this, we realized that the system changed much faster than we expected. The temperature really influenced the physics in the sample,” said Christopher Klose, PhD student at MBI and first author of the study. “That was a real surprise and the beginning of us developing our post-processing technique—coherent correlation imaging (CCI)—so that we could resolve this fast movement.”

After this initial realization, the team decided to dig deeper into the data. They knew that the details about the domain movements were encoded in their data. While there was no existing data analysis technique to solve their problem, they were able to find algorithms that could be adapted. Over the course of three years, the team developed the new algorithm that powers the novel CCI technique.

“There were a lot of challenges. To develop CCI, we combined known correlation function analysis from x-ray photon correlation spectroscopy (XPCS) with holography, which is an imaging technique. One issue was that the holography data was not suited for XPCS analysis,” said Klose.

When x-rays hit the samples in these experiments, they scatter both on the magnetic domains and a holographic mask that defines the field of view. The detector records all the scattered x-rays regardless of their origin. But the team is only interested in magnetic scattering. So, they needed to clean up the data before they could calculate the correlation functions.

The figure shows how the algorithm compares all the frames in the sequence and categorizes (as indicated by the color of frames in the movie) ones that are similar based on their correlations. Ultimately, this effectively regroups the same magnetic domain states as they are populated over time by the system.

“Once we had the correlation function, we could compare all those frames to each other to find similar ones. That also required a new algorithm because we had almost 30,000 frames to sort through,” continued Klose.

This challenge required an algorithm that could catalog the states of the domains for each frame. This algorithm would be a real game-changer for this task because it would be able to sort these states in ways no human could achieve.

How pinning shapes the magnetic landscape

After the team had sorted through their data using CCI, they went to work on the interpretation. The reconstructed images showed black and white domains scattered across their device. But some of these borders, or domain walls, shifted back and forth between the frames, while others mostly stayed put. The question: what were the researchers seeing and what did this mean for skyrmions and magnetic domains?

“Skyrmions are small spherical objects, comparable to balls on a pool table. In our case, thermal energy makes them wander around the table. Now, if the pool table has pinning, the surface isn’t smooth but instead is a hilly landscape. We have two kinds of pinning sites: attractive ones and repulsive ones. The first ones are valleys, and the second ones are hills. In that case, the skyrmions would rest in the “attractive” valleys. If they wanted to move around, they would need to overcome the slopes of the “repulsive” hills,” said Büttner.

The schematic shows how the gray magnetic domain walls flow around the repulsive pinning site in red and accumulate in the two attractive pinning sites in blue.

The researchers found that domain walls behave like rubber bands. They can be pinned down and then oscillate back and forth like a guitar string. While attractive sites can accommodate domain walls, repulsive sites inhibit the movement of domain walls. A domain wall would need to be lifted over the repulsive site. It cannot wander through it. This explains why the scientists saw some domain walls shift constantly, while other barely moved. The latter ones were surrounded by repulsive sites.

“CCI gave us the tool to see this movement over time. Basically, we could make a little movie on how these domains shift. This experiment allowed us to see this kind of fluctuating behavior and its cause for the first time,” said Hu. “We didn’t expect that this collaboration would lead to the invention of a new technique that would broadly benefit other users and researchers studying dynamics.”

Büttner added, “We needed almost a year to fully understand the physics we had found and develop an explanation for the dynamics that we saw. In hindsight, the experiment itself was the easiest part of it all. The real work was the technique development and then the physics explanation.”

The researchers agreed that one key ingredient for this breakthrough was the diverse team of experts they had assembled for this task. They hope that many other research groups will benefit from CCI. While they prepare for applying CCI to a broader range of previously inaccessible dynamics as well as expanding the technique to other x-ray sources, they’re also working on implementing machine learning to make the CCI analysis less manual and more accessible by an even broader community.

Using the new technique, the researchers were able to create a little movie that shows how the magnetic domains shift over time.